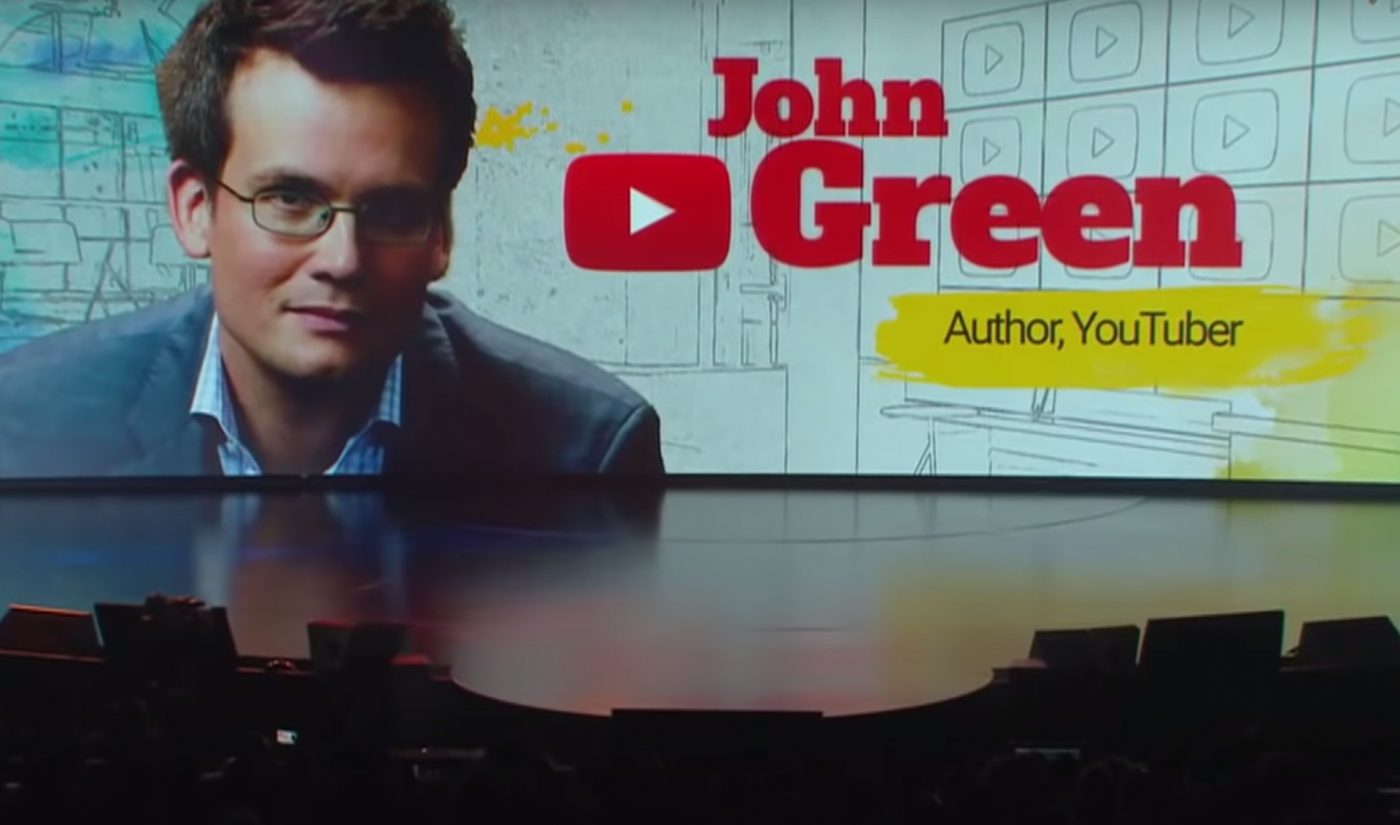 Five years ago, John Green said this to 2,400 advertising execs gathered at YouTube‘s Brandcast presentation during the annual NewFronts. The comment generated waves within the advertising industry, with AdAge’s headline boldly warning at the time: Author John Green to Marketers: YouTube Stars Are Building a World Without You.

Why scare advertisers at an event designed to get them excited about YouTube?

Green, the co-founder of Vidcon, a massive YouTube star, and a New York Times best-selling author, explained that YouTube creators were being undervalued by advertisers. And as a result, creators were developing alternative revenue sources. Rather than relying on brands, he noted, they were launching their own events, publishing books, selling merchandise, and turning to crowdfunding.

Creators were “building a world where they don’t have to depend on advertisers.” Five years later, that world is becoming a reality. Creators are still undervalued by advertisers, but YouTubers’ reliance on brands has only diminished.

In the wake of the coronavirus pandemic, this trend has only accelerated. For example, gamer Preston ‘PrestonPlayz’ Arsement — who counts 5.5 million subscribers and has recently been garnering upwards of 130 million monthly views — has tripled his merch sales, while ad rates have dropped by 50%.

A lot of creators I’ve talked to weren’t making much revenue off their own products five years ago. In recent conversations I’ve had with creators, however, ad revenue plays a small role in their overall businesses. Several creators stated that ads accounted for less than 10% of their total revenues, while many of their own self-started brands account for more than half of what they make in a year.

The scale of some of these brands is becoming seismic, with many disrupting the dominance of traditional players in their respective spaces. For example, married YouTube duo Ethan and Hila Klein, of H3h3 Productions, developed their own apparel line called Teddy Fresh. The brand now has a distribution deal with national retailer Zumiez and has gotten so popular that it even launched a collaboration in February with Nickelodeon staple SpongeBob SquarePants.

Additionally, esports Team 100 Thieves operates a massively poopular streetwear brand, having recently been dubbed the “Supreme of esports” by The Verge. YouTuber David Dobrik created a disposable camera app, which has generated over a million downloads. And finally, after a series of successful video collaborations, Jeffree Star and Shane Dawson unveiled their very own makeup line, which turned out to be a hit. The duo sold 1 million eyeshadow palettes within 30 minutes of launch.

Platforms like Cameo and Patreon have empowered creators to monetize their fans directly. Cameo, the personalized video shoutout platform, has been hailed as the next unicorn. Patreon has over 4 million patrons and has paid out $1 billion to creators to date. And since the onslaught of the coronavirus pandemic, and in spite of recent layoffs, the platform has seen an increase in usage. Patreon added 30,000 creators in March — a 36.2% increase over sign-ups in February.

Platforms themselves have followed suit with this direct-support model, with Twitch, Facebook, YouTube, and TikTok all operating virtual gifting products that enable creators to monetize their fan bases directly and fans to rewards creators for content that they love.

And while the coronavirus has temporarily ground IRL gatherings to a halt, the events industry has also been huge, with creators regularly boasting large enough audiences to sell out national tours. For instance, YouTube duo Sam Golbach and Colby Brock, known for their ghost-hunting content, are embarking on a 13-stop tour; vlogger Trisha Paytas launched ’The Heartbreak Tour’, comprising meet-and-greets with tickets costing hundreds of dollars; and an event for fans of family vloggers called FamFest is also launching, though it has been postponed.

All of these accomplishments show that Green’s words five years ago were prophetic — and truer than ever. Creators are building massive businesses, and if brands continue to support creators, they will reap the rewards. If not, in the words of John Green, “brands will lose relevance with an entire generation of people who look to video not just for distraction, but also for engagement and connection.”

Brendan Gahan is a partner and chief social officer at Mekanism (Epic Signal), with over 13 years of experience in influencer marketing.