Want an idea of YouTube’s plans for podcasting? Take a look at its pitch deck. 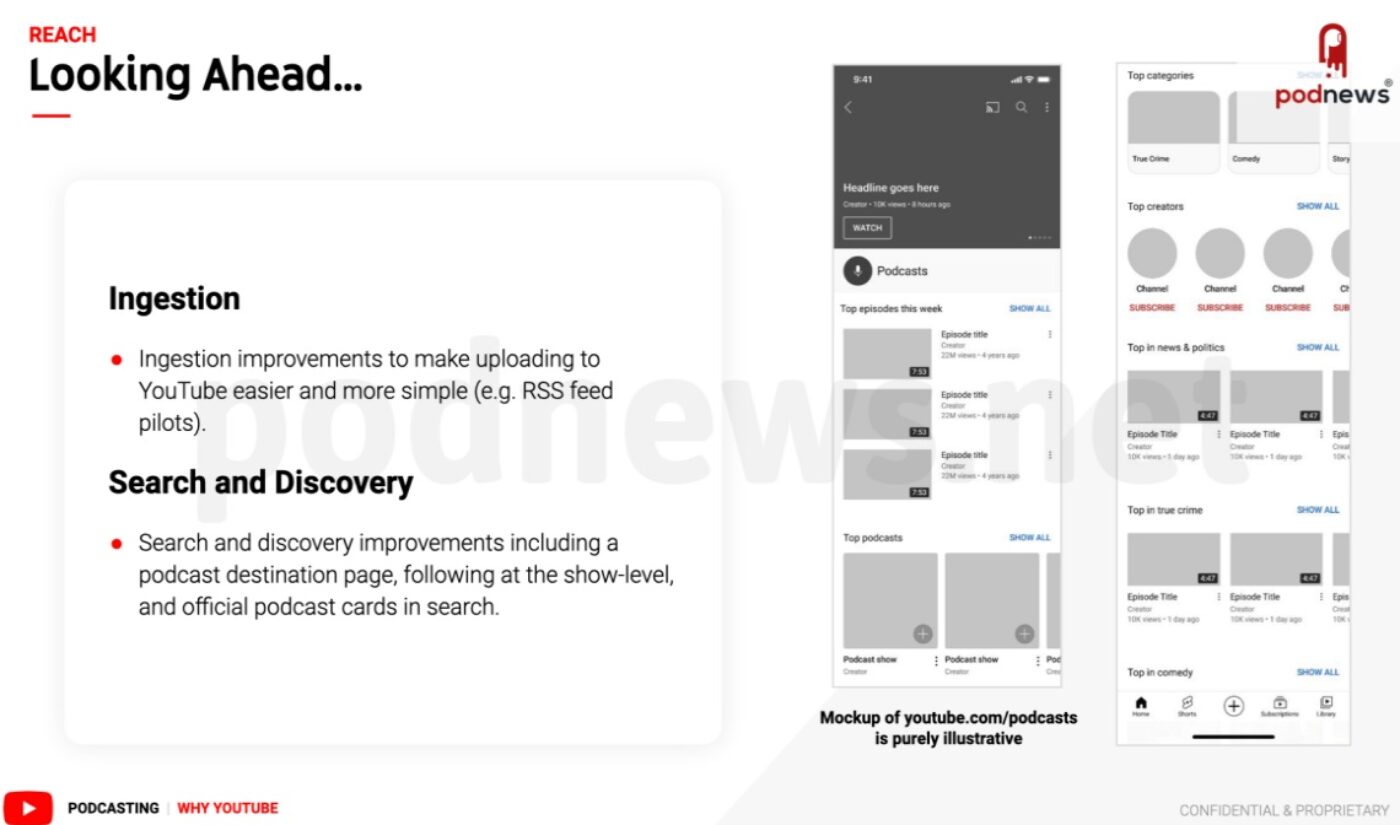 Much has been made about YouTube’s plan to challenge Spotify, Apple, and the other top dogs in the world of podcasting. Though the leading video platform has reportedly dangled some enticing incentives in front of potential podcasting partners, it hasn’t offered many official statements on the specifics of its approach to audio.

In lieu of those statements, we’ll have to settle for the next best thing: An internal pitch deck shared with podcasting newsletter PodNews, which seems to include several audio-centric features YouTube is working on. Among other developments, YouTube appears to be planning on providing a dedicated landing page for podcasts, audio ads, and new metrics for publishers.

PodNews said that YouTube has used the 84-page deck in its presentations to podcast publishers. Three particular slides caught the newsletter’s attention: They comprise a “looking ahead” section in which YouTube discusses its future plans for its podcasting vertical. The company’s approach to the audio world is being led by one of its longtime employees, Kai Chuk, who ascended to his current role last October.

It seems like Chuk and co. are brewing up several enticing opportunities for the podcast publishers of the world. The most notable of those developments is something that has been rumored for a while: A dedicated YouTube landing page for podcasts, similar to the ones that already exist for categories like Fashion and Gaming. YouTube could fill that landing page through direct payments to podcasters, as Bloomberg reported last month, as well as RSS integration. One of the shared slides mentions “RSS feed pilots” that would make it easier to port entire audio libraries over to YouTube.

Other perks mentioned in the slides include “partner-sold audio ads,” which fit well with music tracks and podcast episodes; “search and discovery improvements” like the ability to follow individual shows directly; and “new metrics” that could connect YouTube to “industry-standard podcast measurement platforms.”

YouTube’s rivals will not sit idly by as the video platform edges its way into the podcasting conversation. One of the measurement platforms discussed in the deck is Chartable, which Spotify acquired earlier this year. YouTube will have to deal with Spotify’s heavy spending if it wants to match the audio platform’s prowess in the podcasting world.

YouTube has not yet offered an official comment on the PodNews report. And the proposed landing page, which is expected to live at youtube.com/podcasts, is currently a link to nowhere. If you return to this article in a year’s time, that click could lead you to a treasure trove of podcast content.