VidCon And Discord: How The Event Is Harnessing AMAs To Bind Its Community Around The Calendar 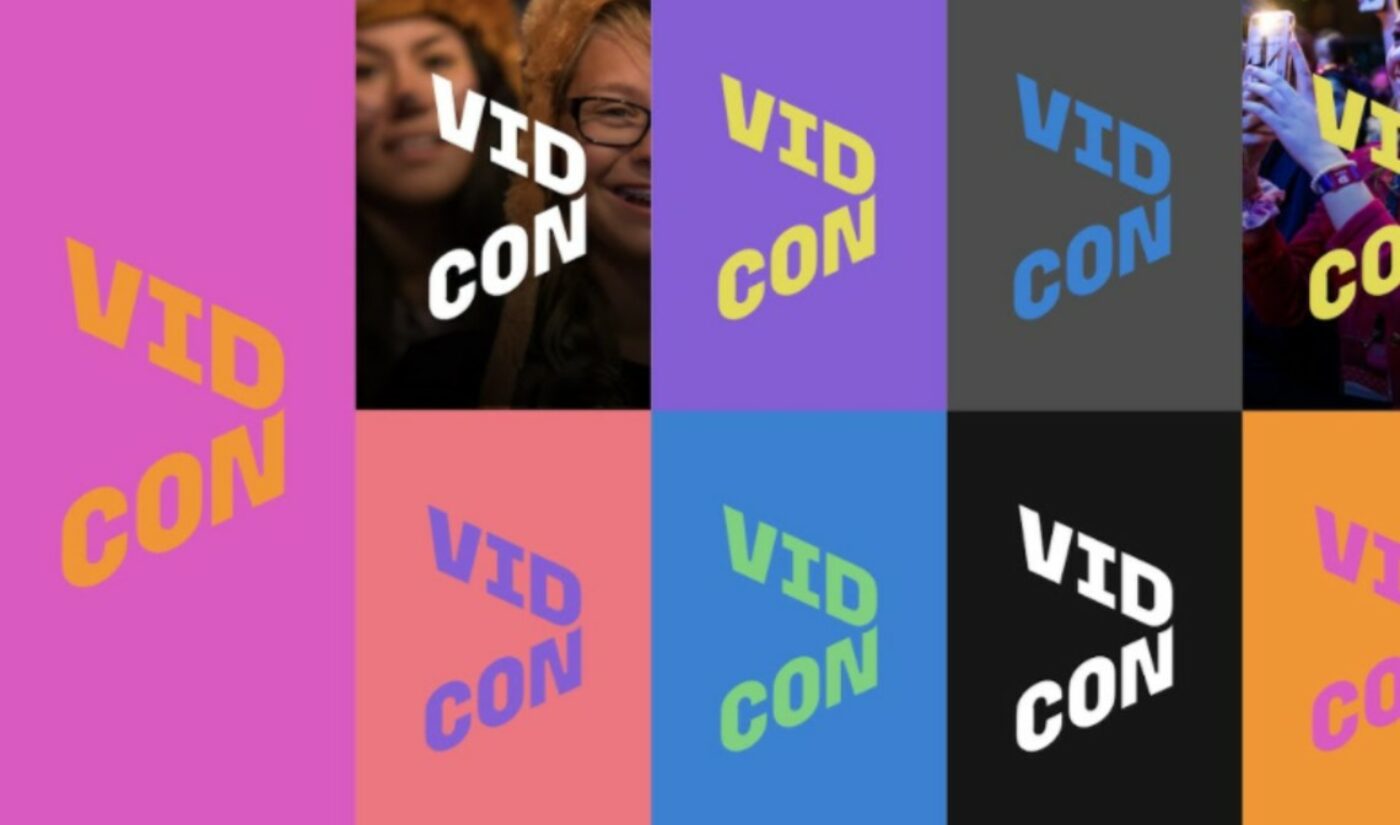 Like so many businesses in the COVID-19 era, VidCon is facing an existential reckoning head-on, after being forced to cancel all of its IRL gatherings in 2020 in favor of a series of summer streams dubbed VidCon Now.

And while the company has announced that in-person conventions are returning in 2021 — including expansion via its first-ever VidCon Brazil event in São Paulo — VidCon is also pursuing a hybrid business model going forward, comprising physical gatherings and year-round digital programming. This comes in light of the success of VidCon Now, VidCon GM and SVP Jim Louderback tells Tubefilter, which has attracted 1 million unique viewers across roughly 150 virtual panels, workshops, and meet-and-greets since it kicked off in June.

One key component of VidCon’s digital strategy going forward is its newly-launched Discord server, where VidCon has been hosting ask-me-anythings (AMAs) with top creators and industry strategists each week.

For the uninitiated, Discord is a group-chatting platform that initially grew to prominence in the gaming community, and enables users of like-minded interests to communicate with one another — via threaded text messaging, voice, video, and media posts — in different communities called ‘servers’.

The company has witnessed enormous growth amid the coronavirus pandemic, per Protocol, with total users increasing by 47% from February to July. And Vidcon’s use of the platform illuminates how it has grown beyond its gaming roots to be harnessed in different industries.

“One of the benefits of a live event is the surreptitious, spontaneous, unplanned connections you make with people — whether you meet someone in a line waiting to get into a performance, or you meet somebody sitting next to you at a session, or at one of our cocktail parties,” Louderback explained. “That’s something that we really tried to take a look at in terms of how to replicate that online — and that’s where we really found Discord.” 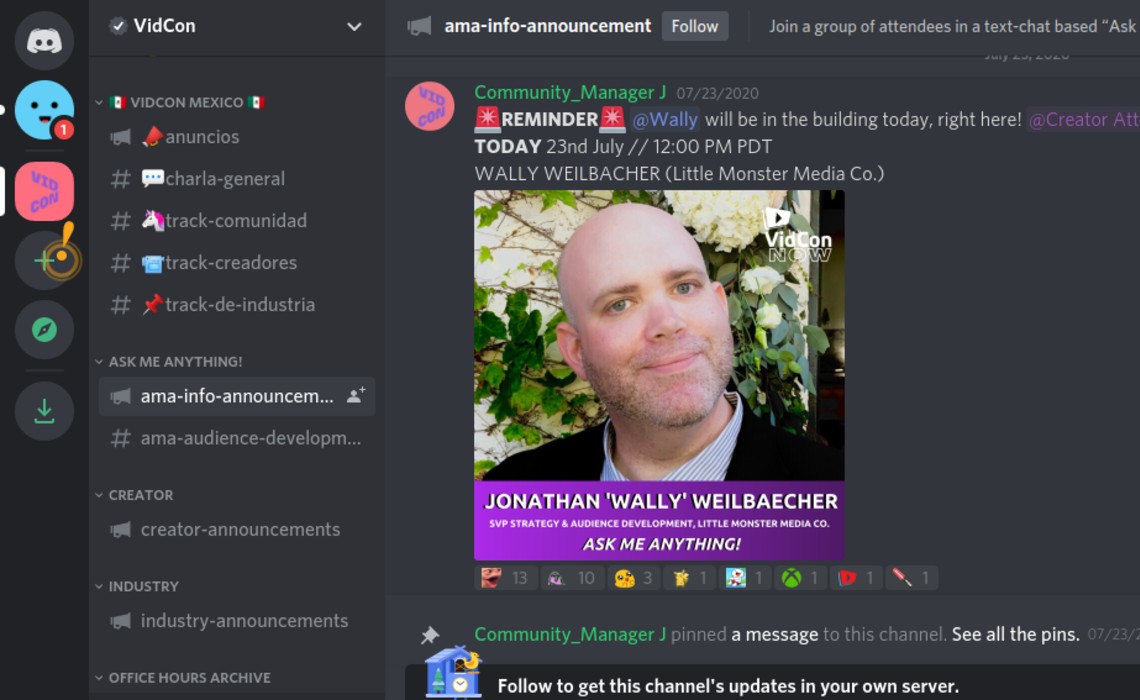 Louderback notes that Discord sits strategically at the same level as VidCon’s other social platforms — including Instagram, TikTok, YouTube, Facebook, and LinkedIn — with the collective goal of binding members of the VidCon community together outside of events.

VidCon launched its Discord server in June, when Discord served as a sponsor for VidCon Now as its “official community platform.” The premise of the initial partnership, as Louderback tells it, was to enable fans to convene on the server around VidCon Now programming in a bid to foster the kinds of serendipitous interactions and relationships that have become the touchstones of the convention experience. And while Discord’s sponsorship ended in September, the server has lived on and continues to grow, having amassed roughly 19,000 active members to date.

“How do we re-imagine VidCon?”

Every Wednesday and Thursday, VidCon hosts Discord AMAs with one audience development expert and one creator, respectively. Each AMA is roughly an hour long, Louderback tells Tubefilter, with an average of 40 to 50 community members writing in questions. After concluding, AMAs are housed in a channel on the server dubbed ‘Office Hours Archive’.

In addition to AMAs, VidCon’s Discord server hosts different sections focused on various communities and discussion prompts, including pets, fashion, book clubs, debates (including age-old questions like tacos vs. burritos, or whether pineapple is apt as a pizza topping), and an ‘Animators Corner’ — which happens to be one of its most active hubs. Louderback says this is because people are especially eager to interact with animators, who appear infrequently online as themselves and prefer for their work to do the talking.

At the end of the day, Louderback says the community that VidCon is building on Discord was precipitated by the pandemic, which accelerated VidCon’s shift toward a business that was both digitally-delivered and around-the-calendar. This shift is occurring as VidCon has also recently announced its first visual rebrand in over a decade, as well as introducing the ability to purchase tickets to attend VidCon virtually.

Separately, VidCon Now programming will continue to roll out year-round, comprising free, weekly sessions and speakers in local languages across the globe.

“If you sit around in these times of crisis and change, if you don’t reimagine your business and think about what the world’s going to look like on the other side, you’re doing a disservice to your business,” Louderback said of the company’s repositioning. “So when COVID hit, we took a step back and said — even after we have herd immunity or a vaccine, it’s going to be a different world, so how do we reimagine VidCon? So we’ve really been able to come out of all this stronger.”