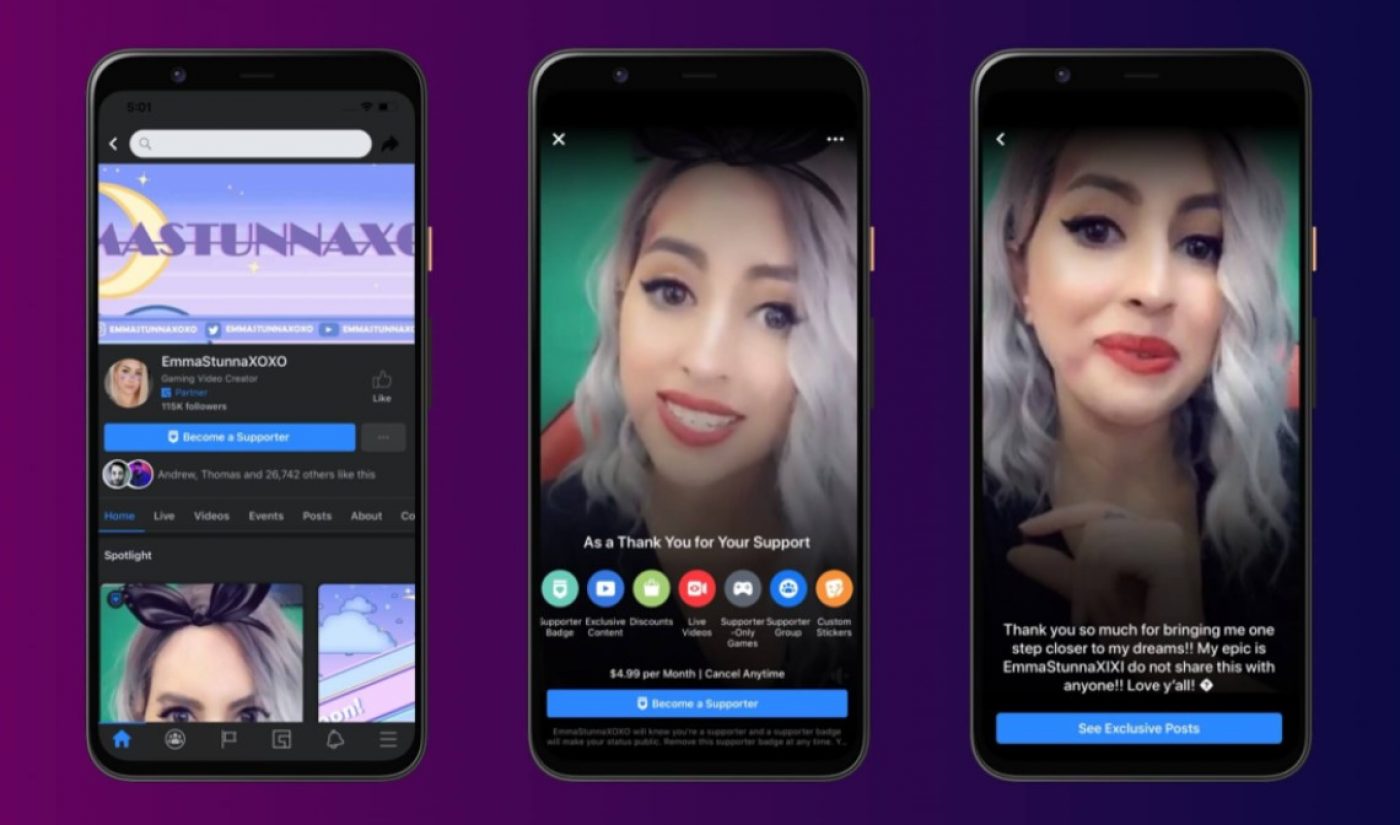 Facebook Gaming is expanding the availability of two key monetization tools to an increasing number of streamers.

First, the platform is rolling out its Fan Subscriptions product to creators within its Level Up program who achieve 250 returning weekly viewers. Fan Subscriptions allow viewers to support creators with recurring monthly payments of $5 in exchange for exclusive perks. The Level Up program, which also allows creators to monetize via real-time tipping tool ‘Stars‘ and broadcast in high definition, is available to creators with at least 100 followers and who stream gaming content at least two days within 14-day period for a total of four hours.

For now, expanded Fan Subscriptions will only be available in Australia, Brazil, Canada, Mexico, Thailand, the U.K., and the U.S., Facebook says. And creators can check their eligibility status in Creator Studio under the ‘Insights’ tab, and then clicking ‘Loyalty’. Facebook explained in a blog post it settled on the 250 returning weekly viewer stat as a threshold because “creators who hit this benchmark have built a strong community and are more likely to be successful on Fan Subscriptions.”

Next, Facebook is rolling out Live Ads to all partnered gaming creators. (Whereas Level Up is a non-contractual initiative like Twitch’s affiliate program, Facebook Gaming’s partner program comprises a contract whereby a creator agrees to a set streaming quota in exchange for regular paychecks from Facebook).

Live ads, which had previously been in tests for months, refers to: pre-rolls ads that run before a broadcast, images that appear below a stream, and a new mid-roll format that runs in the main player while the stream continues to play in a smaller, picture-in-picture window. Facebook also says that it’s beta testing ways for partnered creators to monetize old streams with pre-roll, image, and mid-roll ads.

And finally, Facebook shared that it’s working on a new ad format dubbed Live Breaks — which allow creators to temporarily step away from their streams for a stretch or snack break — all while continuing to keep viewers engaged. Live Breaks are manually triggered by creators and can be 60, 90, or 120 seconds in length. The format blends creator-generated content (such as play highlight reels) with ads.

In April, Facebook debuted a dedicated standalone gaming app. Originally slated to arrive this month, the launch was accelerated due to increased online video viewership amid the COVID-19 pandemic. At the time, the company said that 700 million of Facebook’s 2.5 billion monthly active users already watch gaming content on the platform. Facebook Gaming has also signed exclusive streaming deals in recent months with creators including Noen Eubanks, Ronda Rousey, Corinna Kopf, and Disguised Toast.