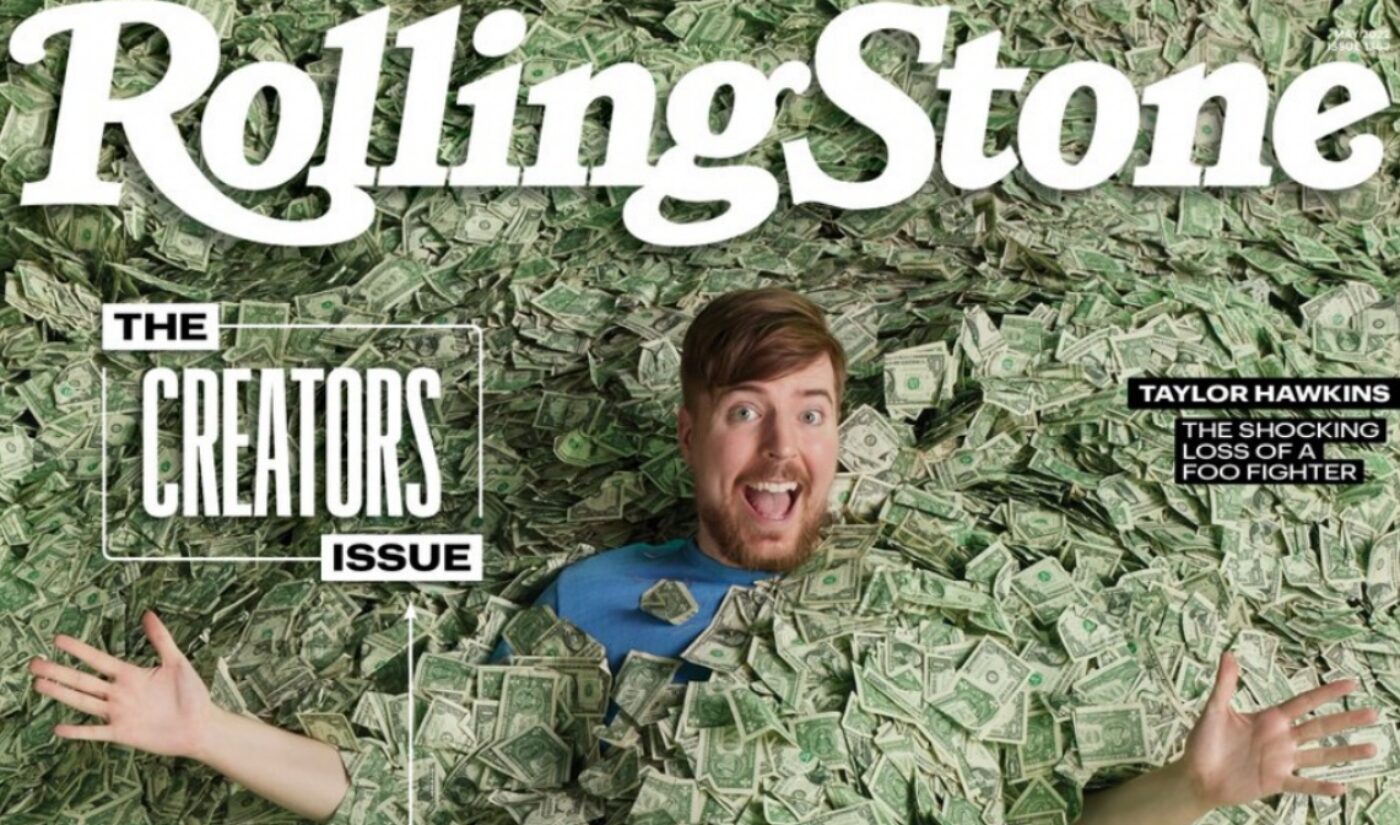 For months, Rolling Stone has used activations at festivals and conferences to promote its upcoming ‘Creators Issue.’ That special edition is now available online and on newsstands, and its cover boy is none other than MrBeast himself. The North Carolina-based creator, whose real name is Jimmy Donaldson, is the first YouTube star to appear on the cover of the 54-year-old periodical.

Reed Duchscher, who manages Donaldson through his company Night Media, wasted no time sharing the milestone cover on Twitter. If you look beyond Donaldson’s ecstatic face and the pile of money that surrounds it, you’ll see teases for other parts of the Creator Issue, including a feature on TikTok star Bella Poarch and a list of “social media’s hottest rising stars.”

first content creator to grace the cover of @RollingStone 🤩 pic.twitter.com/EDMiNa086F

To read the exciting parts of the Creator Issue, you’ll have to venture past the cover. The centerpiece of the magazine is a 5,500-word profile of Donaldson, which details the creator’s humble past and his explosive present. Hardcore MrBeast fans will already know most of the information in the article, but there are some fascinating tidbits in there that were new to me. I didn’t know that Donaldson had a Catan phase during which he ordered several copies of the game each month, nor was I aware that he is trying to turn his hometown — Greenville, North Carolina — into a hub for content creators.

“The biggest parallel I could draw is to Tyler Perry in Atlanta,” MrBeast LLC president Marc Hustvedt told Rolling Stone. “Jimmy’s creating his own studio system here.” (Hustvedt is also a co-founder of Tubefilter.)

But the main thing the profile discusses is money. Gobs and gobs of money.

The article has an obsession with money that its central figure doesn’t seem to share. In his discussion with Rolling Stone, Donaldson reiterated a belief he previously shared on The Joe Rogan Experience. “I don’t want to live my life chasing the next shiny object to the next shiny object,” he told reporter EJ Dickson. “It’s a sad, miserable way to go about life.”

Later in the piece, we learn that Donaldon’s giving nature extends to his time off-camera. “Jimmy said to me the first night I met him, his life ambition is to improve the world. I have no shadow of a doubt that’s sincere,” Beast Philanthropy CEO Darren Margolias told Rolling Stone. “Also to the people that say ‘He does it for the views,’ we have done some stunningly generous things Jimmy pays for 100 percent out of pocket that nobody knows about.”

In many ways, Donaldson is the perfect creator to represent his colleagues on the cover of the Creator Issue, even if the shape of his career is uniquely his own. He is an obsessive, driven individual who is producing content unlike anything the world has ever seen, and he’s making millions of dollars in the process. Most creators can identify with the first part of that sentence, and if they play their cards right and get lucky, they might identify with the second part, too.