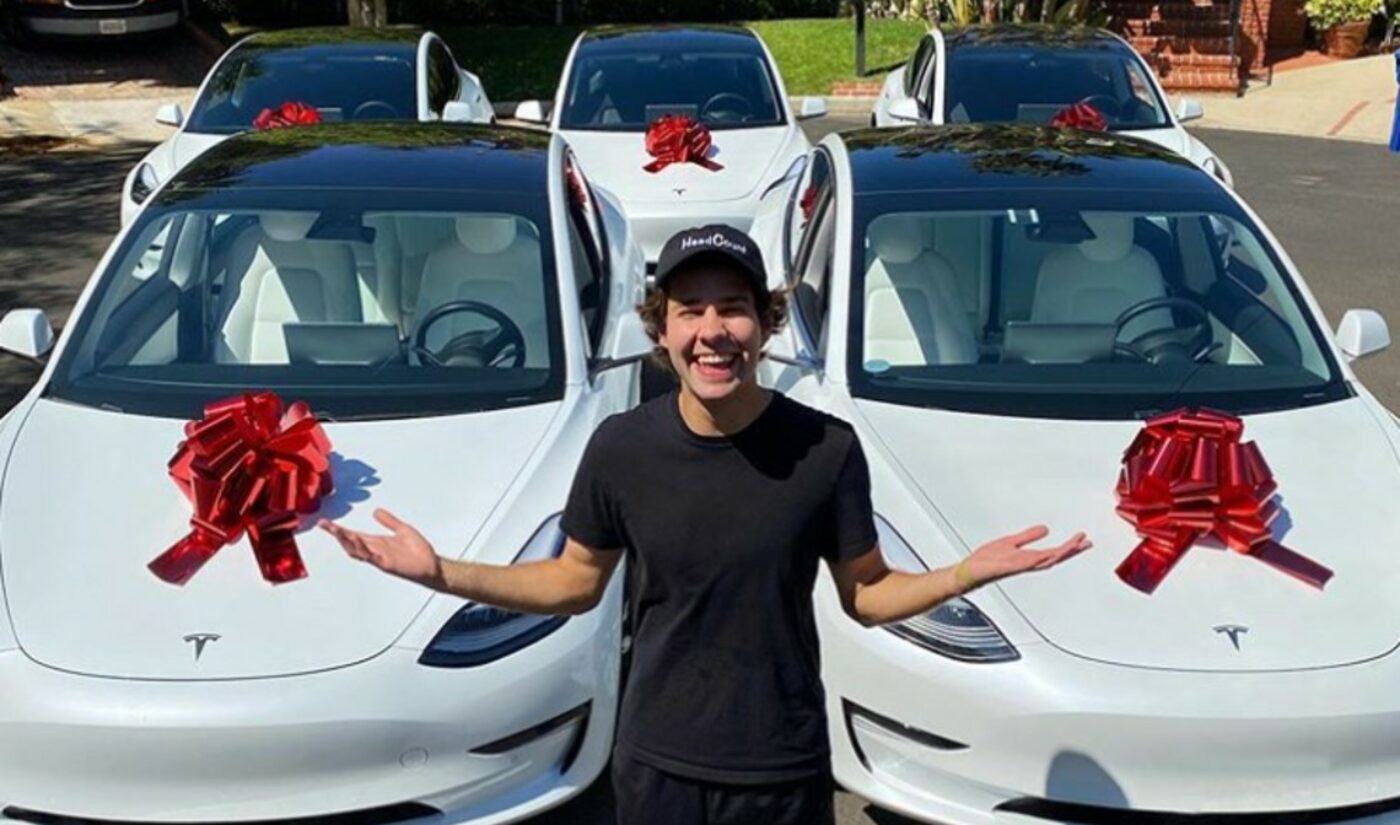 David Dobrik, whose YouTube vlogs frequently feature big-ticket giveaways and other seismic stunts, is looking to channel that premise toward a higher purpose ahead of the November elections.

The 24-year-old is partnering with Headcount — a national, nonpartisan nonprofit that promotes voter registration, mostly in partnership with popular musicians — to give away five brand new Teslas. In order to win a Tesla, participants in the sweepstakes must check to see that they are registered to vote on the Headcount website. (Applicants can also apply by texting ‘Voter Dobrik’ to 40649 or by mailing a physical card to Headcount headquarters in New York City).

Five winners will be selected at random and announced on Monday, Headcount says, with no purchase or voter registration necessary — though participants will have the opportunity to register if they have not done so already. In order to be eligible, applicants must be U.S. residents aged 18 and over, with the contest closing on Oct. 4 at 11:59 pm ET. Per the official rules, winners will receive a Tesla Model 3, which has a suggested retail price of $37,990.

The partnership is part of Headcount’s larger Good To Vote campaign, which has seen other influencers like Michael Stevens and Jack Douglass undertaking various challenges — shaving their beards or previewing forthcoming series, for instance — in order to encourage their fans to register.

Already, Headcount says the campaign has been a record-shattering success, driving 10,000 new voter registrations within the first hour of launch on September 29, and 23,000 people to verify that they had already registered within that same time frame. And as of today at 11 am ET on September 30, Headcount says the numbers for registrations and verifications have reached 82,000 and 212,000, respectively — making it the organization’s largest campaign to date. This is a huge win, Headcount says, given that millennials and Gen Z (Dobrik’s predominant audience) make up 37% of all eligible voters, though they are drastically under-registered.

The latest initiative is made all the more meaningful given that Dobrik was born in Slovakia and immigrated to Chicago as a child — and thus, is ineligible to vote himself. Nevertheless, Dobrik has spoken openly about being a beneficiary of the Deferred Action for Childhood Arrivals (DACA) program, which enables certain immigrants who arrived in the U.S. as children to avoid deportation and become eligible for a work permit — and which has been under siege by the Trump administration.

Even amid his continued work ahead of the elections, Dobrik’s vlog — which has amassed 18 million subscribers and 100 million monthly views — remains dark due to the coronavirus.