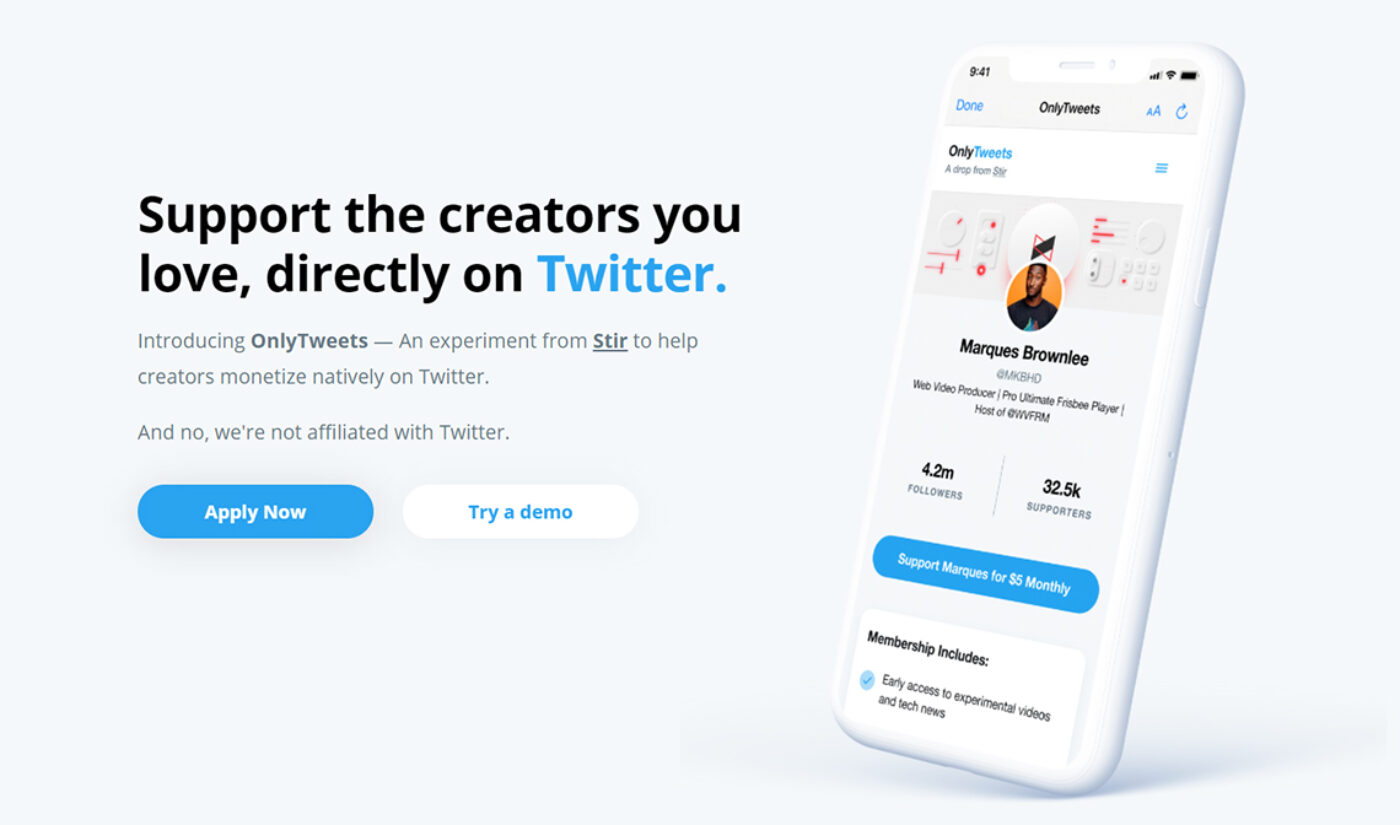 Creators can now offer exclusive Twitter content for a monthly subscription fee–but not because the platform finally added monetization.

Instead, it’s because of OnlyTweets, the latest product drop from tech startup Stir.

“Twitter is probably the largest collection of knowledge and passion and creator work that’s ever been assembled in one room,” Joseph Albanese, a former Facebook developer and the cofounder/CEO of Stir, tells Tubefilter. “But if you think about the business model and these creators who drive most of the value, for them to monetize, they have to ask their supporters to go somewhere else. Read my newsletter, listen to my podcast, subscribe to my course…”

In true @stir fashion, we built with incredible velocity. A quick recap:

· Last Friday, it was an idea in a notion doc
· By Sunday we scoped and designed the entire thing
· Monday night, @_anishagnihotri had a working prototype
· Tuesday was bug fixes + polish

OnlyTweets works by creating separate, locked Twitter accounts for participating creators. Followers who visit an OnlyTweets account will see a “Support for $X monthly” button, along with a list of what they’ll receive if they subscribe. When someone subscribes to a creator’s OnlyTweets, Stir manually processes their payment and grants their Twitter account access to the locked feed. (Worth noting: Though OnlyTweets’ name is, of course, a play on OnlyFans, it won’t allow creators to vend NSFW content, per Albanese.)

Creators will receive 90% of revenue from their monthly subscriptions, Albanese says. Stir–which has a policy of not profiting from its drops–will put the remaining 10% into a fund that will go toward “events, education, and be put back into the creator ecosystem for up-and-coming creators,” he adds.

Like the rest of Stir’s drops (FYP.RIP and Goodbye Mixer are two recent ones), OnlyTweets requires creators to apply if they want to use it. In the 24 hours since OnlyTweets debuted, Stir has received “a couple hundred” applications, and plans to roll out paywalled accounts for four major creators later today, Albanese says. He wouldn’t name the creators who’ve been accepted to OnlyTweets, but said applications have come in from a YouTube fitness instructor who wants to use their account to post daily morning workouts, and from a creator who plans to use their OnlyTweets to converse with fans through Twitter’s direct messaging system.

Albanese says he hopes this will push Twitter to introduce monetization. “We’re trying to get this conversation started, because we feel our responsibility is to push the creator ecosystem forward,” he says. “It’s almost like, if we don’t do it, who else is going to? We don’t want to sit around and wait–that’s not how innovation happens.”

Creators who want to join OnlyTweets can apply here.