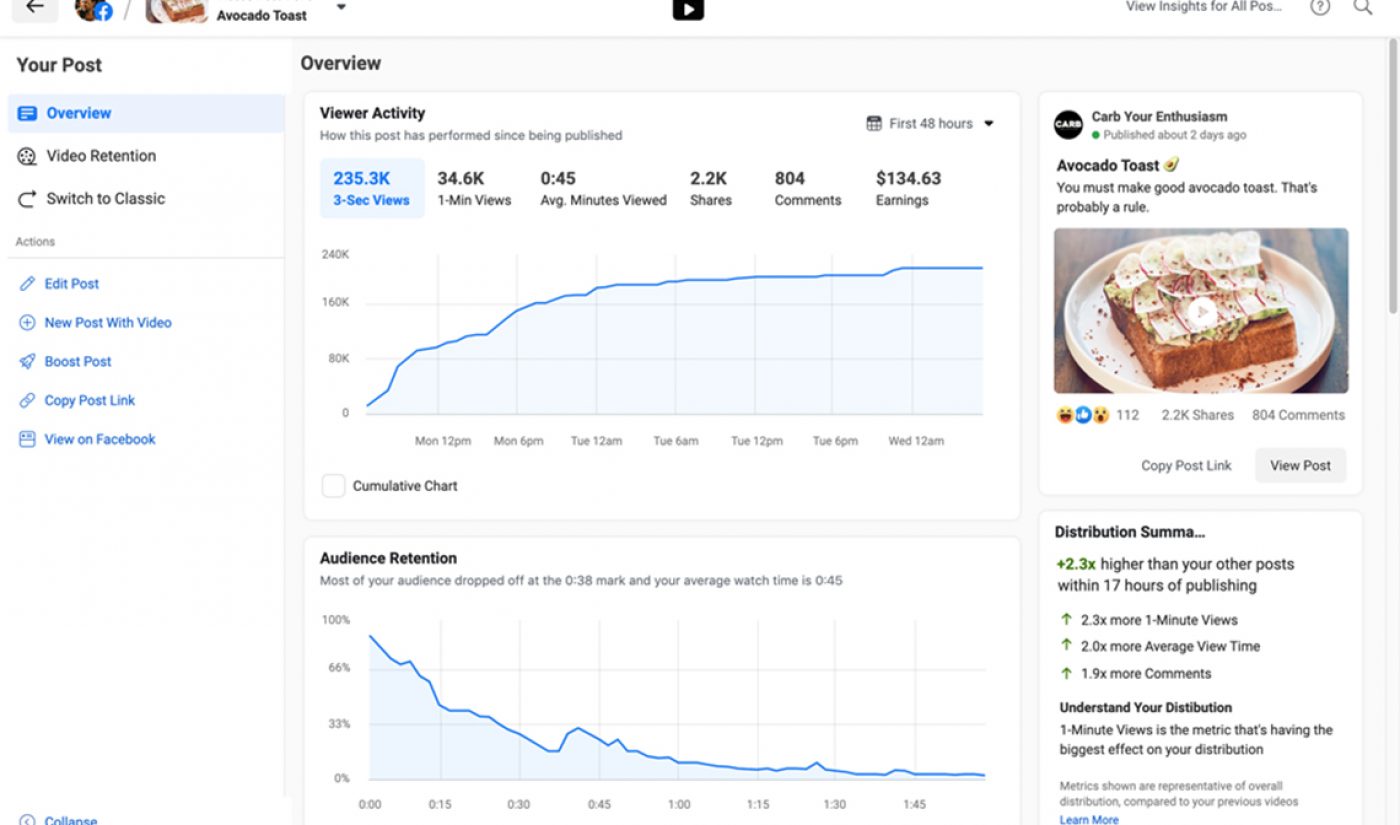 Facebook has rolled out a major update for creators that expands its Fan Subscriptions and Stars programs to more people, offers ads on more video formats, and implements a new range of viewership analytics.

The platform introduced its Fan Subscriptions program back in February 2019, and until today, it was limited to just a few thousand creators in the U.S. and U.K. Like YouTube’s Channel Memberships and Twitch’s subscriptions, Fan Subscriptions lets viewers pay $4.99 per month for access to more content from a creator.

In a blog post about the update, Facebook said it’s seen “tremendous interest from people wanting to support their favorite creators” by becoming subscribers. So, it’s pushing the feature out to all eligible creators in Australia, Brazil, Canada, Mexico, Thailand, the U.K., and the U.S.

To be eligible, creators must have at least 10,000 followers or more than 250 return viewers (viewers who watch at least one minute of your content each week for at least two weeks), plus 50,000 post engagements and 180,000 total watch minutes. They must also be in compliance with Facebook’s general monetization standards, fan funding TOS, and Apple’s App Store guidelines for subscriptions.

Facebook has similarly expanded Stars, an onsite currency viewers can use to “tip” creators. (Stars cost $1.99 for 95, and creators are paid out $0.01 for each Star they’re tipped.) In addition to pushing that feature out to more markets and creators, Facebook has added a couple of new Stars-related tools, notably Stars goals. Goals allows creators to set an amount of Stars they want to earn during a live stream; that amount–and how close they are to reaching it–will then appear as an overlay on their stream. Facebook added this feature specifically because it noticed creators have been successfully using live streams to monetize, it said.

As for ads, creators can now place still-image ads and postroll video ads on videos between 60 and 180 seconds long. These lengths were previously not eligible for any advertising, and are now only available for what Facebook calls “non-interruptive ad formats.”

“While we continue to invest in long form content, shorter content can also build loyalty and intention so we’re testing these two non-interruptive ad formats in engaging short videos,” the company explained.

Ads are also now available for live streams, “including a new type of midroll ad that plays in the main video player during the live stream while the broadcast keeps playing in a smaller window,” Facebook said. Creators can retroactively add marketing to cystallized versions of some past streams, it added.

Both these ad updates are part of Facebook’s plan “to increase overall payouts for video creators in Watch,” it said. Right now, it’s testing a potential future function that’ll give viewers an option to see a short ad to support the creator that made the video they’re watching.

Last but not least, creators’ video analytics tools have been beefed up with two new dashboards. The Video Details Explorer dashboard tells creators where traffic is coming from for each of their videos, while Comment Insights shows “how commenting on posts may lead to increased engagement and impressions compared to similar posts where a creator did not join the conversation,” Facebook said. Each dashboard appears to update weekly, and sends creators notifications when new data is available.

Facebook also added hourly viewership metrics for the first 48 hours after videos are published, and its analytics tools now include information about live streams and the number of Stars earned.

The platform indicates it’s introducing all these updates at this precise moment because of significantly increased traffic from COVID-19. “Now more than ever, creators, video publishers and media are using Facebook to build a meaningful community and business,” it said. “We’re seeing the traditional notion of a creator evolve as comedians, artists, fitness instructors, athletes, small businesses and sports organizations use video and online events to connect with their audience.”

These updates (in particular those about marketing) come as Facebook is facing an ad boycott from major brands like Coca-Cola, Starbucks, and Unilever. Companies halted their spend after a civil rights coalition that includes the NAACP and the Anti-Defamation League launched its #StopHateForProfit campaign, accusing Facebook of “repeated failure to meaningfully address the vast proliferation of hate on its platforms.”