FYP.RIP Lets TikTok Creators Download Every Video They’ve Ever Made At Once 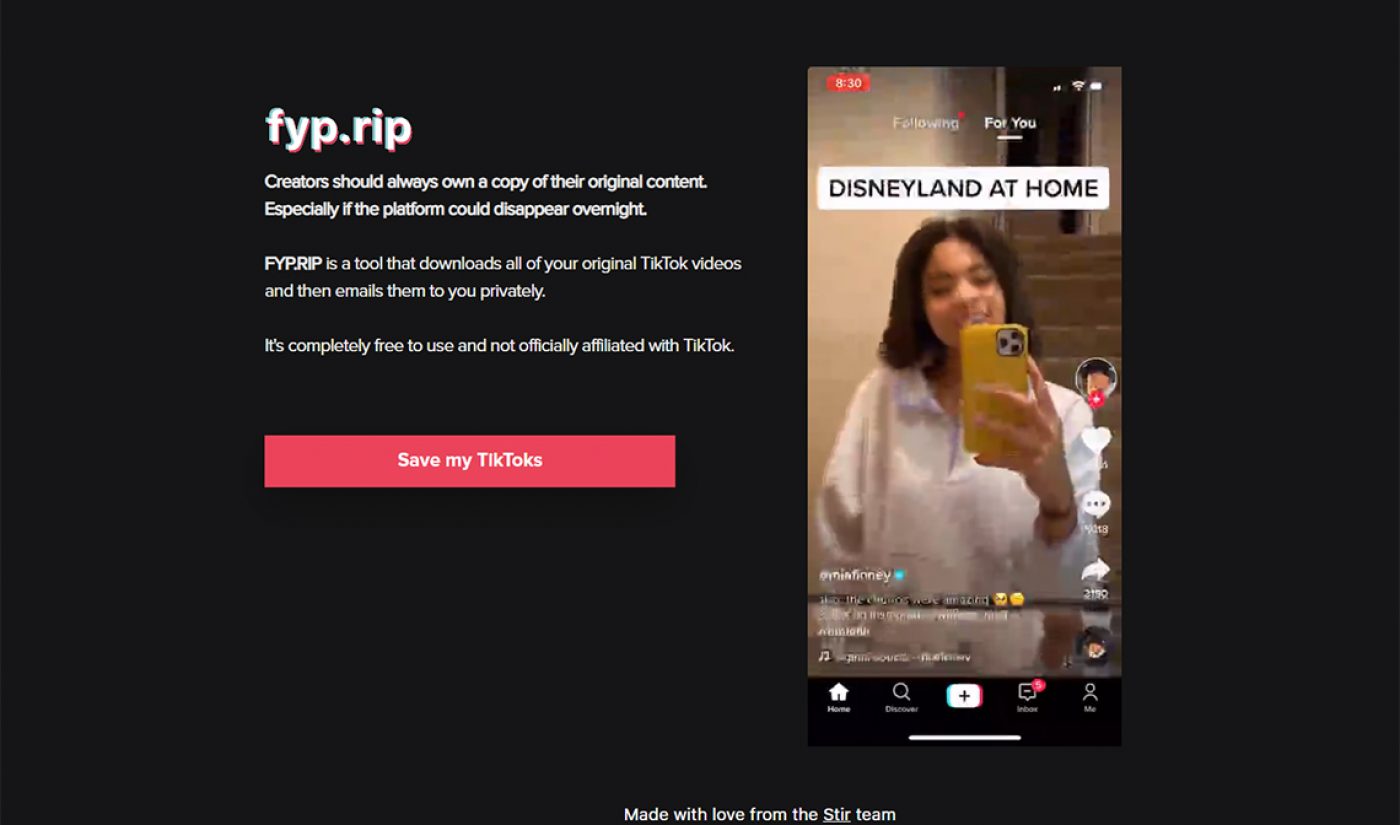 This is an understatement, but TikTok is having a rough week.

Over the past few days, the shortform video app has been banned in India (one of the largest smartphone/internet usage markets in the world), banned–then unbanned, apparently–from use by Amazon employees over alleged security risks, and is “certainly” being considered for a potential ban in the U.S., according to Trump administration secretary of state Mike Pompeo.

All of this has sparked concerns amongst the hundreds of millions of users who upload tens of thousands of videos to TikTok each minute. Many creators aren’t just worried about losing access to TikTok itself; they’re worried about permanently losing the content they made for it. That is unfortunately a possibility, because unlike (most) content on platforms like YouTube and Facebook, TikTok videos aren’t premade and then uploaded. Instead, they are filmed, edited, and posted using tools within the app—tools that do not automatically save an external version of the videos for backup. TikTok also doesn’t provide a way for creators to quickly download all of their content post-upload, so if they are suddenly faced with something like, say, a potential country-wide ban, they’ll have to try to manually save their entire library of content one video at a time.

Or they would’ve had to, if not for FYP.RIP.

The free tool, released Wednesday by tech startup Stir, lets TikTok creators download every video they’ve made on the app in one ZIP file. To use it, creators just fill out this form telling FYP.RIP their TikTok user name, the email tied to their account, and their exact number of followers. Then Stir will email them a downloadable file of their videos.

Joseph Albanese, a former Facebook developer and the cofounder/CEO of Stir, tells Tubefilter the company “believes creators should own their audience and their content and not be too reliant on one platform.” In line with that mission, it regularly releases tools aimed at creators whose home platforms have just gone under or been otherwise affected. For example, when Microsoft shut down Mixer last month, Stir made this tool, which gives creators a spreadsheet of their Mixer followers’ user names as well as any social media accounts those followers had publicly linked to their accounts.

Stir came up with the idea for FYP.RIP this past Tuesday, Albanese says, after seeing concerns from creators and realizing there was no tool they could use to rapid download their videos. He and another developer worked through the night, and by Wednesday afternoon, Stir had a beta version of FYP.RIP (named after TikTok’s famed For You Page) up and running.

“I think our goal with this was to pursue that narrative that we stand for and help creators own their content,” Albanese says. “Platforms can kick someone off seemingly overnight, and they can also go away. People should be able to own all their content so it doesn’t just go away.” He adds that TikTok has brought in a lot of new creators who may not have experience with protecting their content, and says it’s important that creators take ownership of what they make early in their careers. 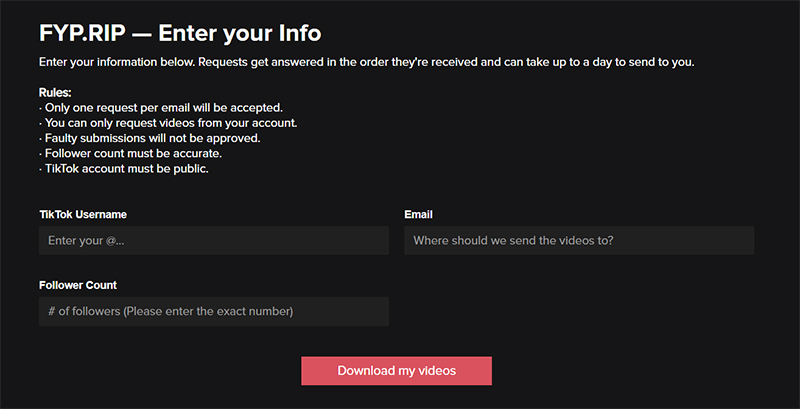 As for what FYP.RIP is doing to protect TikTokers’ videos, Albanese says measures are being taken to verify people who ask for downloads, and the company is only approving one emailed request per TikTok account. It’s also not keeping creators’ videos for itself. Once a creator’s request has been approved, a downloadable ZIP file is stored on FYP.RIP’s servers for 48 hours. After those 48 hours, the file is deleted, and only the creator will have copies of their videos.

Currently, because of the sheer number of requests FYP.RIP is receiving, creators can expect to get a download link about 24 hours after their request is submitted, Albanese tells Tubefilter. “We have five people working on it right now,” he says. “We’re going to go as fast as we can.”

He also cautions that if TikTok were to be banned in the U.S. and removed from the App Store/Google Play, Stir would no longer be able to access it–so creators who want their archives should ask for them ASAP.

You can see more information about FYP.RIP here.