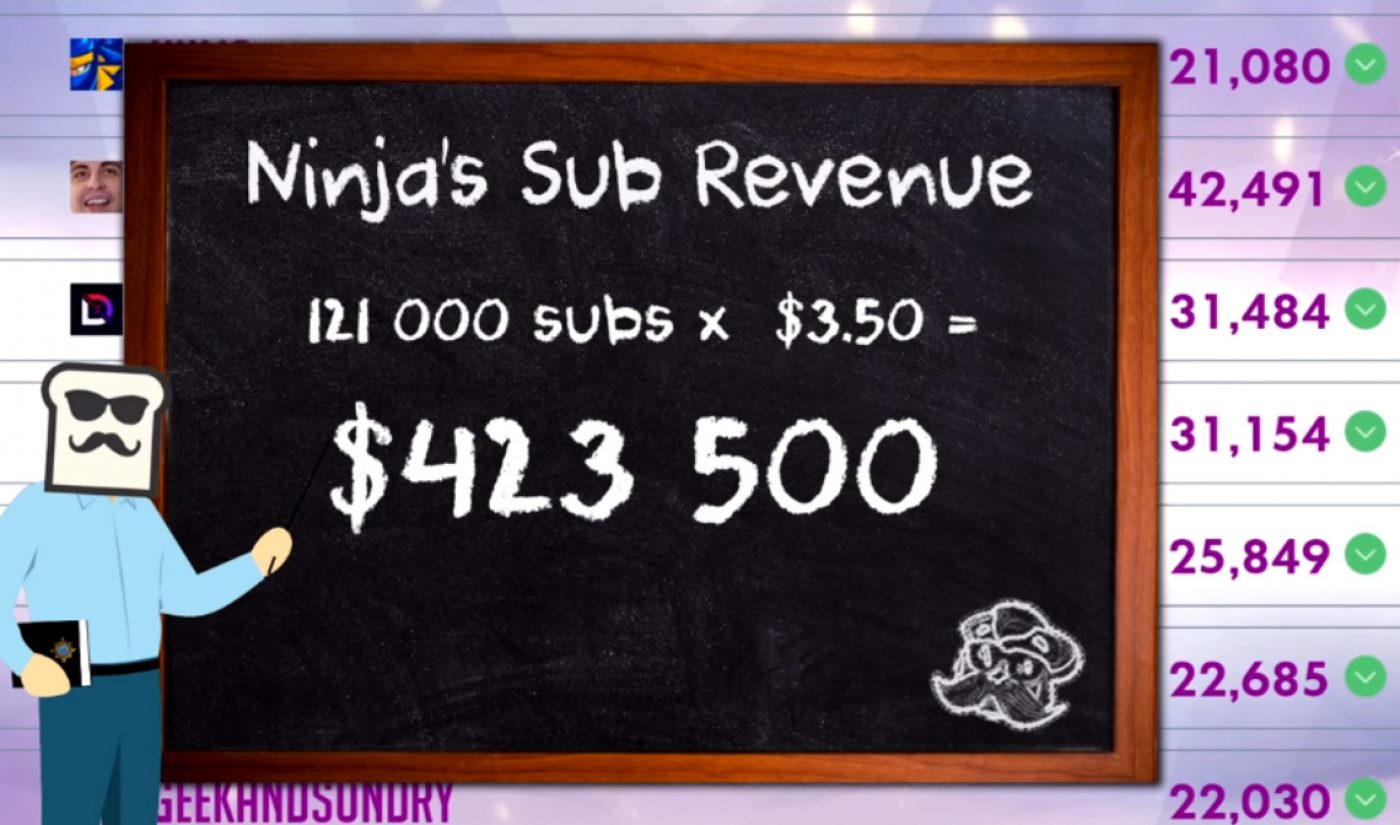 Twitch streamer Jeremy ‘DisguisedToast’ Wang just gave folks a no-holds-barred look at exactly how much he makes on the streaming platform.

Wang, who has just over 800,000 followers on Twitch and regularly hits 10,000 concurrent viewers in his streams, revealed in a YouTube video that he pulls in around $20,000 per month as what he calls a “base salary,” plus any money he makes from sponsorships and brand deals.

But Wang didn’t stop there. He broke down all the ways Twitch streamers can earn money and listed his earnings from each method, giving fans and fellow creators alike valuable insight into what your revenue can be when you’re hitting his kind of numbers.

Wang, who also has a YouTube channel with nearly 700,000 subscribers and an average of around four million views per month, said there are four ways Twitch streamers make some dough: 1) donations from fans, 2) paid subscriptions (which cost $4.99 per month), 3) ad revenue, and 4) sponsorships.

Donations are basically tips, and virtually all of that money (minus any associated PayPal or other credit card processing fees) goes to streamers. Many creators incentivize donations. For example, Wang mentions some creators give out their private Snapchat account to people who donate a specific amount. Wang doesn’t do that, nor actively asks for donations during streams, but still takes in about $2,500 in donations per month.

As for paid subscriptions, they’re set at $4.99 per month, and Twitch does take a significant chunk — 50% for all but its “top tier” creators. Those top tier creators are generally people who average 10,000 viewers or more during streams, and for those numbers, they get to keep 70% of their subscribers’ monthly payments. Wang works out that math to mean someone like Tyler ‘Ninja’ Blevins, who has about 121,000 subscribers, is making somewhere in the neighborhood of $423,000 per month from subscribers alone.

However, as Wang points out, it’s possible not all those subscribers are actually paying $4.99 per month. Since Amazon owns Twitch, when people sign up for Amazon Prime, one of their perks is a $4.99 per month credit they can use to subscribe to any streamer they want. A good freebie for viewers, and one that pays Twitch streamers, too.

Compared to subscriptions and donations, ad revenue earns streamers a “tiny” bit of money, Wang says — but there’s ways for streamers to earn a “tiny” bit of money tens or hundreds or thousands of times over. While streamers get money from the pre-roll ads viewers are served at the beginnings of streams, they can also trigger ads to run during the stream itself. Some streamers never or rarely trigger ads during their streams, while others run them constantly.

Wang, who does not run extra ads, solely earns money from the pre-rolls and other associated banner displays, and brings in about $10,000 per month.

Sponsorships, which on Twitch often show up in the form of streams where gamers are paid to play specific games, can earn them anywhere from one cent to $1 per viewer per hour — so, someone who, like Wang, averages 10,000 viewers, can earn between $1,000 and $10,000 per hour, depending on the game he’s playing.

There are other methods of bringing in cash, like sponsored YouTube videos (around $5,000 for a 30-second ad, according to Wang) and live appearances (between $5,000 and $10,000). Twitter and Instagram posts related to sponsored events are often bundled into the sponsorship package for free.

Wang’s reveal is the latest glimpse we’ve gotten at how much creators are making. Last month, popular YouTuber Caleb Marshall, aka The Fitness Marshall, made a vlog talking about how much he’s made in four years of doing YouTube (spoiler: not much), and just a few days before that, a much smaller-time YouTuber showed how much he made in his first million views. And recently, ecommerce app Sellfy launched a tool that estimates how much money creators can make from YouTube ad revenue and from selling merch.