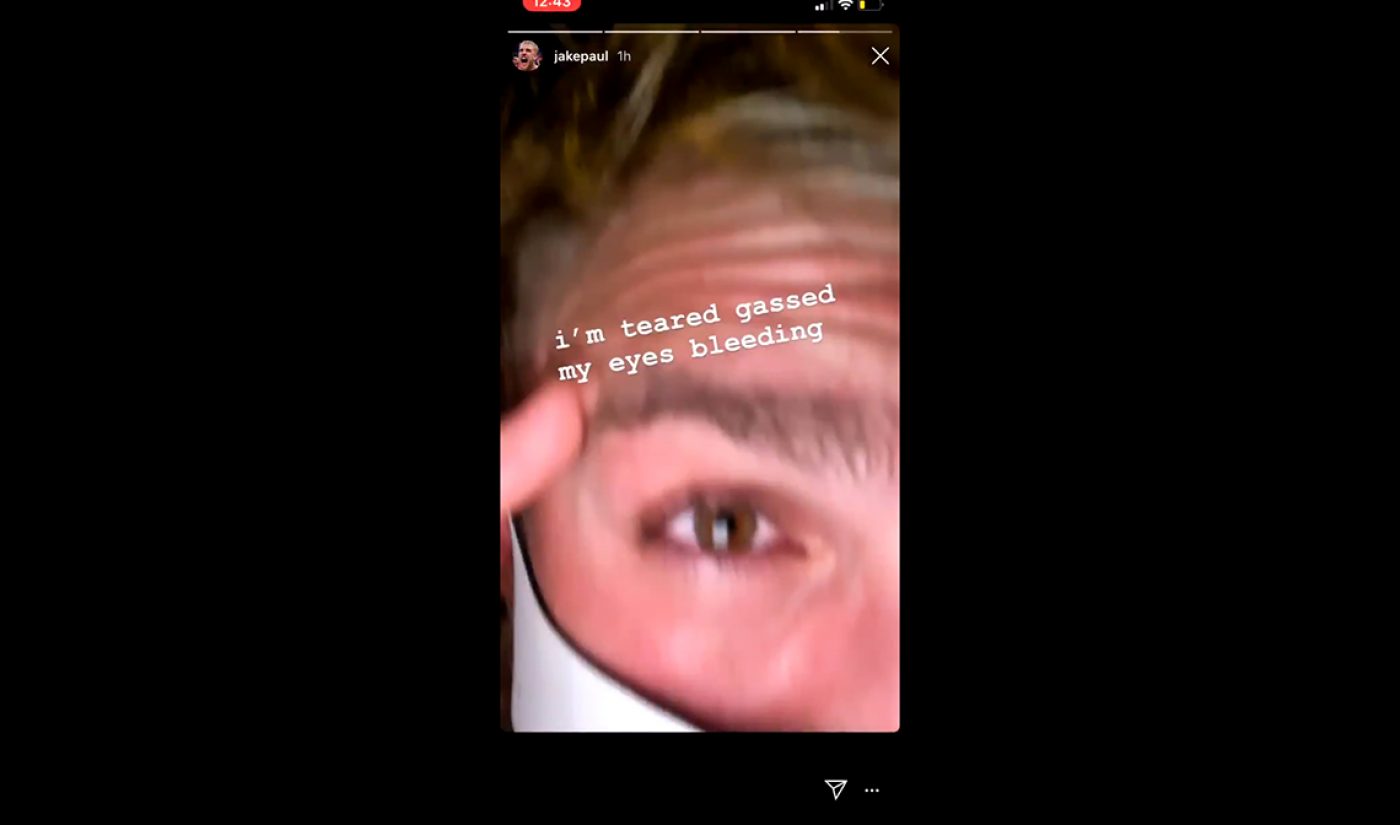 “We were strictly documenting, not engaging,” Jake Paul says about recent Instagram videos that showed him and his photographer/videographer Andrew Blue present as a group of people smashed windows and looted items from stores in Arizona’s Scottsdale Fashion Square mall.

“To be absolutely clear, neither I nor anyone in our group was engaged in any looting or vandalism,” the YouTuber–who has 20 million subscribers and is known for selling merch, annoying his neighbors, fake-marrying Tana Mongeau, and talking to Shane Dawson–wrote in a statement posted to Twitter. He adds that he and his associates “spent the day doing our part to peaceful protest one of the most horrific injustices our country has ever seen, which led to us being tear-gassed for filming the events and brutality that were unfolding in Arizona.”

Paul apparently attended one of many protests sparked by the alleged murder of George Floyd, a 46-year-old Black man who was killed in Minneapolis Police Department custody after an officer, Derek Chauvin, knelt on his neck for nearly nine minutes. Witness video of Floyd’s May 25 arrest shows him crying out and pleading with Chauvin and other officers–two of whom were also kneeling on his body–telling them he couldn’t breathe and that they were killing him.

All four officers involved have since been fired. On May 29, Chauvin was arrested and charged with third-degree murder and second-degree manslaughter. If convicted on both counts, he could spend a total of 35 years in prison.

Early in the evening May 30, Paul, who lives in Calabasas, California, updated his Instagram Story with a video taken in the streets of Scottsdale, Arizona. “Bunch of f-cking idiots, bro,” he says, pointing at a billowing yellow cloud of tear gas. “I walked right up to there, these f-cking idiots tear-gassed me.”

The video ends on a still frame of Paul’s vaguely red eye with the caption “i’m teared gassed my eyes bleeding.” The video also has text captions reading “america is in ruins” and “what can we do?”

Jake Paul also posted to Instagram Stories that he was tear gassed by the cops. pic.twitter.com/gfZGwGXDLS

But it isn’t the tear gas video that’s sparking backlash against Paul. It’s a series of videos posted later in the night by Blue.

In one, people gather at what seems to be an otherwise deserted Scottsdale Fashion Square, break the windows of Chinese restaurant P.F. Chang’s, and emerge with stolen items. A version of Blue’s video sewn together with video taken from another angle appears to show someone exit the eatery with a bottle of vodka and immediately hand it off to Paul:

Here is both Jake Paul video editted together to show someone breaking into the @PFChangs, stealing a bottle of Vodka, and handing it off to @jakepaul the minute it comes out the door. Watch the red circle

Another video shows Paul, Blue, and perhaps around 30 or 40 others inside the mall. Paul and Blue both hang back as people damage a display car and break into Sephora, but Blue appears to shout from behind the camera, “Hey yo, get me a free cologne!”

“I do not condone violence, looting, or breaking the law; however, I understand the anger and frustration that led to the destruction we witnessed,” Paul wrote in his statement. He claims the group being tear-gassed forced them to keep moving, apparently right into the shuttered mall.

Paul and Blue’s videos come amid a number of reports that Black demonstrators and leaders are pleading with white protesters to stop destroying property and looting. Also relevant is one of Donald Trump’s recent tweets, which appeared to threaten to use deadly military violence on looters.

As Washington Post reporter Abby Ohlheiser and New York Times reporter Taylor Lorenz have pointed out, this is not Paul’s first time content-gathering at the center of a national tragedy. When Hurricane Harvey hit Texas in 2017, he uploaded This might have to be my last vlog…, a video where he and crew travel to Houston, gather a bunch of fans in a Walmart parking lot to load up supplies, and deliver said supplies to a local food bank. A later vlog showed him with Houston police officers and firefighters, where he was directly involved in the rescue of at least eight people, he said in an Instagram post.