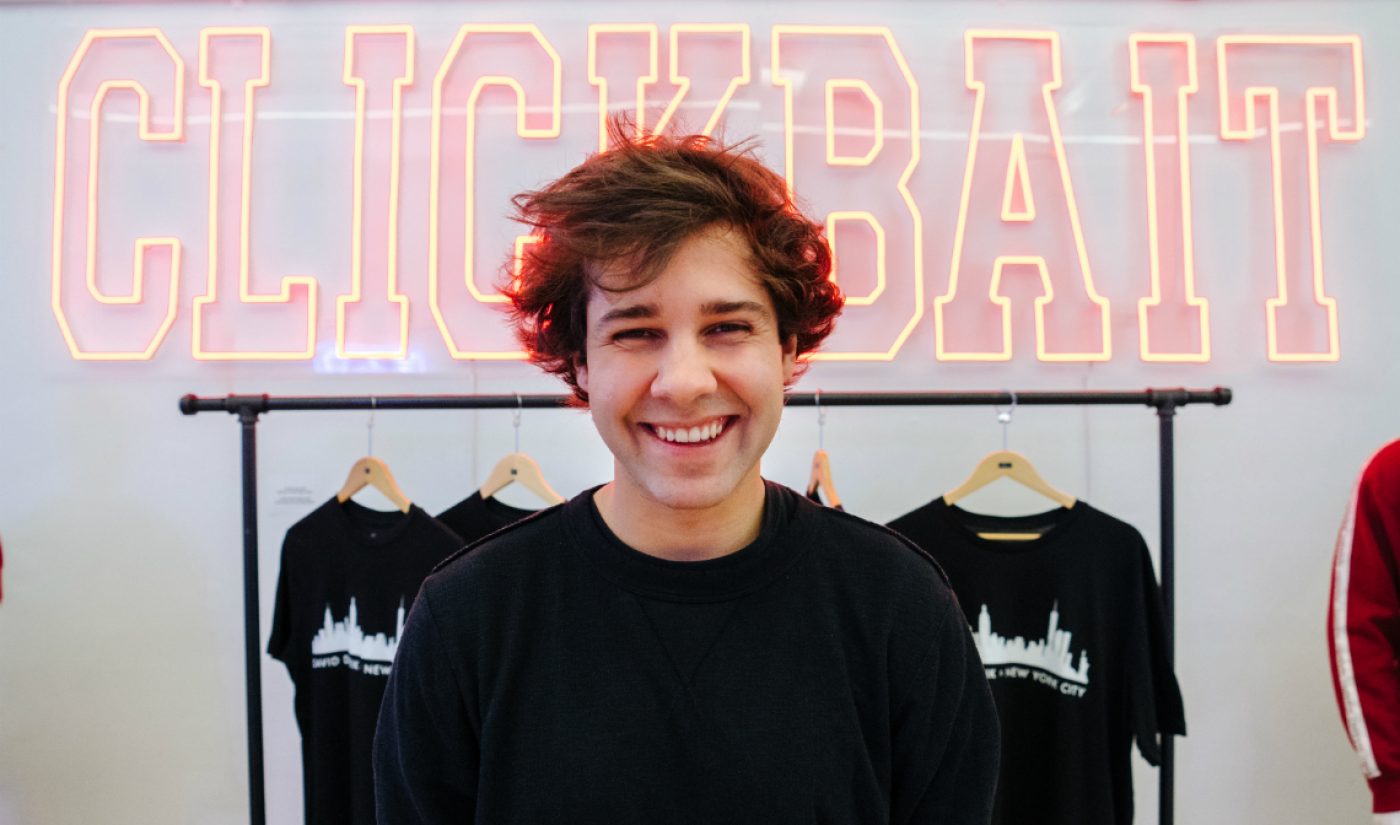 This past weekend, more than 10,000 people flocked to Casey Neistat’s collaborative YouTuber space 368. And no, it wasn’t because they wanted to catch a last glimpse of Neistat before July, when he’ll depart New York City for Los Angeles.

It was because David Dobrik was in town.

Dobrik, who got his start on Vine and now has 12.4 million subscribers and more than 200 million views per month on YouTube, teamed up with merch upstart Fanjoy to turn 368 into a pop-up shop featuring new and exclusive items from his Clickbait merch line. Clickbait comprises clothing items like T-shirts, sweatpants, hoodies, and sports bras, as well as lifestyle products like coffee mugs and phone cases. At the pop-up (which was sponsored by ticket platform and longtime Dobrik-collaborator SeatGeek), Dobrik debuted products from Clickbait’s latest capsule collection, which will be available to the masses online at a later date.

Of the 10,000 people who showed up at 368, only 6,000 could fit in the pop-up over the course of its two-day lifespan, Fanjoy CEO Chris Vaccarino tells Tubefilter. Those 6,000 shoppers snatched up nearly 4,000 items of merch — which equals out to four items sold per minute the shop was open.

“David loved the idea of launching his new collection with the pop-up shop and creating a real-world experience for his fans to enjoy,” Vaccarino says. “We love having the ability to power these events and see the massive impact that our Partners have on the people who come out to support them.”

You can see a (relatively) small sample of the massive crowd in this tweet from Neistat, shot in the New York alleyway behind 368:

“We love working with creators in any capacity,” Paul Leys, co-founder of 368, tells Tubefilter. “When Fanjoy approached us about doing a pop-up with David, it seemed like a great fit. To say we underestimated the response from his NYC community would be an understatement.”

Amping up his merch line isn’t the only new creative endeavor Dobrik’s exploring lately. In February, he announced he was dropping his vlog schedule from a grueling three videos per week down to two, partially to help protect his physical and mental health, and partially so he could “say ‘yes’ to other opportunities,” he explained at the time. Presumably that includes things like flying to NYC to say whattup to a few thousand subscribers.

He’s also since launched a dedicated YouTube channel for his weekly podcast, Views, which is co-hosted by fellow vlogger Jason Nash. The channel has so far netted 476,000 subscribers, and episodes receive an average of 597,000 views. The duo plans to start hosting guests at Views soon.