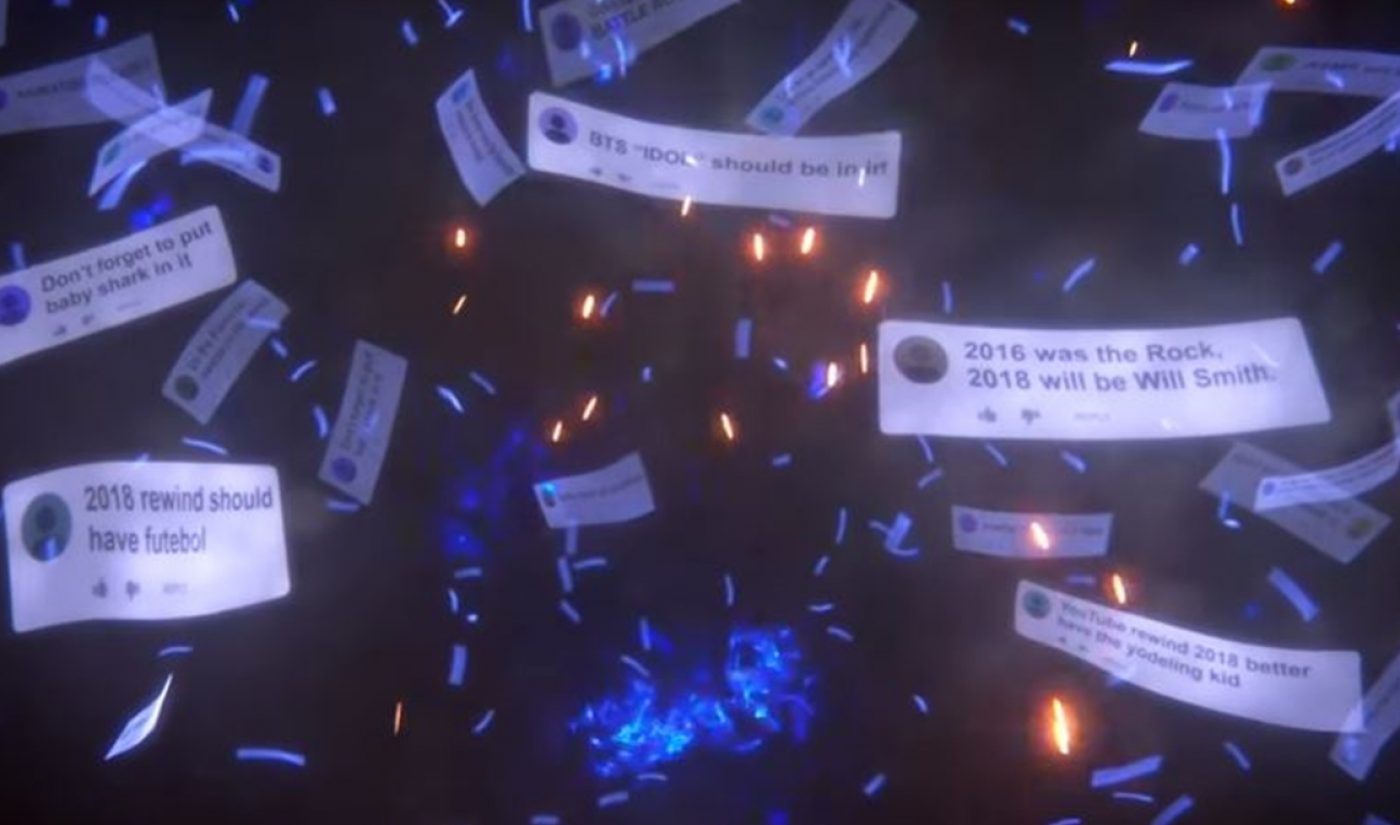 In an ironic twist, this year’s iteration of YouTube Rewind — a much-ballyhooed annual production in which the platform takes stock of its biggest personalities and memes in a compilation clip — is on track to clinching the dubious distinction of the most-‘disliked’ YouTube video of all time.

Rewind 2018, which the video giant unveiled last Friday in collaboration with digital studio Portal A, is currently the second most-disliked video in YouTube history. In just four days, the video has racked up 7.1 million dislikes. To put that into context, the platform’s most-disliked video ever, Justin Bieber’s “Baby,” currently counts 9.8 million dislikes — though that music video was released all the way back in 2010.

If the dislikes continue to pour in, Rewind 2018 could soon become the platform’s most-disliked video ever — which would mark something of a pie-in-the-face for YouTube, given that Rewind serves as a celebration of all that it stands for. At the same time, the fact that Rewind is such a major spectacle means that it’s especially poised for criticism — particularly given the vastness of the YouTube community and the inevitable grumblings by creators and fans about what was and wasn’t included.

A frequent critic of YouTube Rewind is also one of the compilation’s most glaring absences in recent years: Felix ‘PewDiePie’ Kjellberg, who is currently fighting to maintain his status as YouTube’s most-subscribed star. (Though his gaming chair did make an appearance thanks to Jaden Animations). Given past controversies, however, it’s hardly surprising that YouTube wouldn’t want to be synonymous with Kjellberg. Other notable absences this year include Logan Paul and KSI‘s boxing match as well as the numerous highly-viewed docuseries helmed by Shane Dawson.

Kjellberg’s review of Rewind 2018 (below) currently stands at a whopping 14 million views. Noting the dislike-to-like ratio of this year’s video, Kjellberg says, “It was almost like people wanted to dislike it before it came out because the community is more unhappy with YouTube than ever.” While he notes that Rewind used to be a badge of honor, he says he’s almost glad he hasn’t been included in recent videos, due to the “cringey” nature of the affair.

Rewind 2018 currently has 96 million views and 2 million ‘likes’. The third, forth, and fifth most-disliked videos on YouTube are Jake Paul‘s “It’s Everyday Bro,” the trailer for Call Of Duty: Infinite Warfare, and a stunt by Kjellberg in which he sought to create the most disliked video on YouTube history.