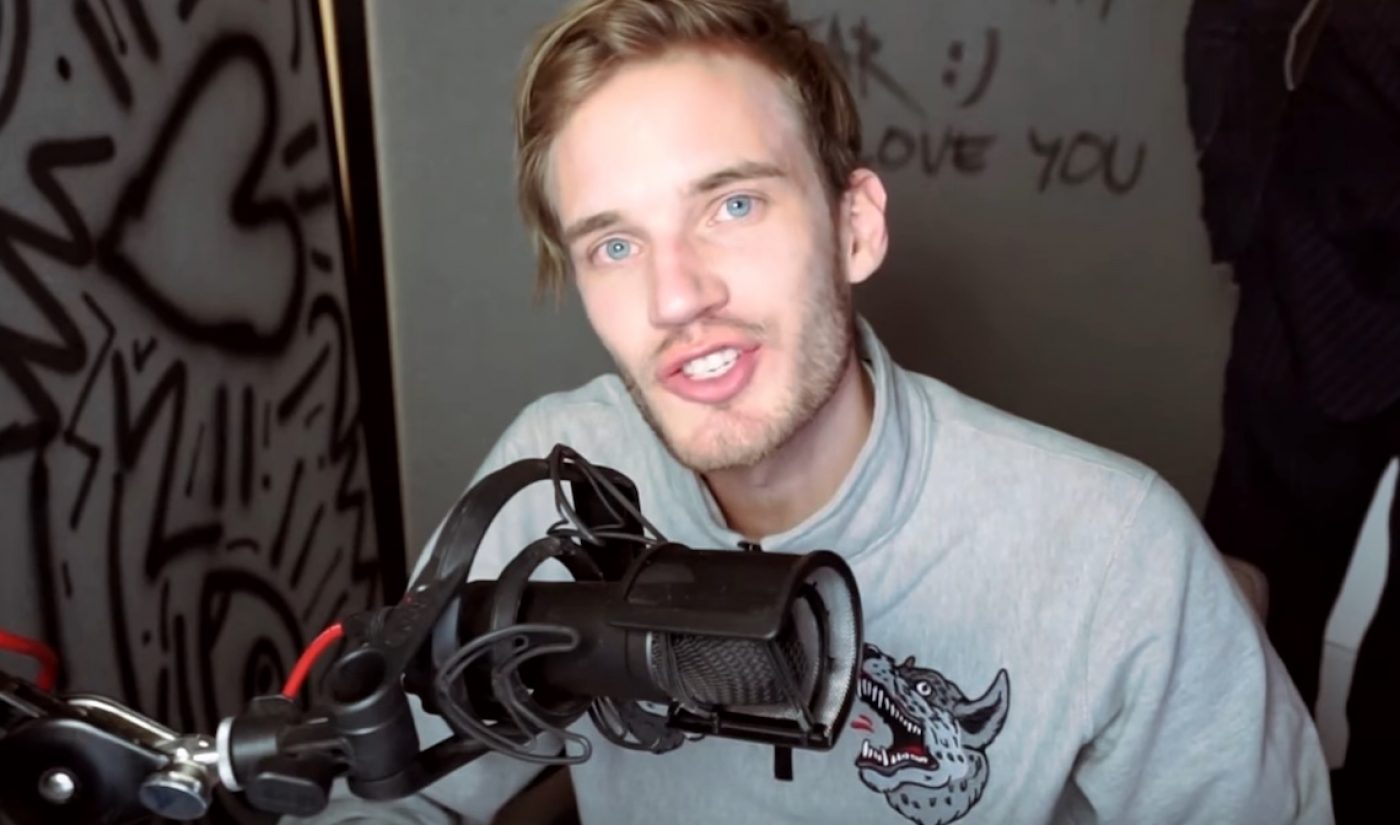 Felix ‘PewDiePie’ Kjellberg, YouTube’s most-viewed and most-subscribed star (who recently passed the 50-million subscriber mark), has been dropped by his multi-channel network, Disney’s Maker Studios, in the wake of several YouTube videos posted to his channel comprising anti-Semitic jokes and Nazi imagery. In response, YouTube has also axed the second season of Kjellberg’s YouTube Red series, Scare PewDiePie, and has removed his channel from Google Preferred – a program that aggregates YouTube’s top creators into higher-priced packages for advertisers – a YouTube spokesperson confirmed to Tubefilter.

The controversy all began last month with a now-deleted video in which Kjellberg showcases Fiverr – an Israeli startup where users can pay freelancers $5 (or more) to perform any variety of tasks. Kjellberg found two men in India who will write any message on a piece of wood and dance around for $5. Kjellberg tasked them to hold up a sign that said ‘Death To All Jews,’ and they complied.

The Wall Street Journal, meanwhile, found a total of nine videos since August on Kjellberg’s channel that feature anti-Semitic jokes, leading Maker on Monday to sever ties with the 27-year-old. “Although Felix has created a following by being provocative and irreverent, he clearly went too far in this case and the resulting videos are inappropriate,” Maker told Tubefilter in a statement. “Maker Studios has made the decision to end our affiliation with him going forward.”

YouTube, which pulled ads from the Jan. 11 ‘Death To All Jews’ video before it was taken down by Kjellberg, hasn’t removed ads or taken down any of the other anti-Semitic videos, the Journal reports. While YouTube says it is a platform for free expression, the site does remove any content containing hate speech, according to its policies, or which “promotes violence or hatred against individuals or groups based on certain attributes.”

After the Journal’s inquiries, Kjellberg reportedly removed three of the offending videos, including the one mentioned above, and another posted on Jan. 22, in which a man dressed as Jesus Christ says, “Hitler did absolutely nothing wrong,” a nod to an internet meme that originated on anonymous imageboard website 4chan. The Journal reports that Kjellberg’s videos had started to earn the praise of neo-Nazi websites, including The Daily Stormer, in recent weeks.

Kjellber has stated numerous times in his videos that his actions outlined above were meant to be a joke. The 27 year-old took to Tumblr over the weekend to attempt to clear the air –though he stopped short of apologizing for the clips. “I was trying to show how crazy the modern world is, specifically some of the services available online,” he wrote. “I want to make one thing clear: I am in no way supporting any kind of hateful attitudes.”

It remains to be seen how the changes will ultimately affect Kjellberg’s thus-far illustrious career. In 2016, it was reported that he was YouTube’s highest-paid star, pocketing $15 million, according to Forbes. Kjellberg joined Maker in 2012 — which was purchased by Disney in 2014 for $675 million — and last year formed Revelmode, a joint venture with Maker that produces videos, apps, and merch. The first season of his YouTube Red series Scare PewDiePie was a bonafide hit for the platform, too. YouTube CEO Susan Wojcicki praised Kjellberg’s reality series in June 2016, saying it boasted audiences that rival the top shows on cable television.

It’s also worth noting Kjellberg has used his massive audience to promote a number of charitable initiatives. The latest of which was a live stream in December 2016 entitled Cringemas, at which Kjellberg and fellow gamers Jacksepticeye, Markiplier, and Emma Blackery raised over $1.3 million for the nonprofit organization (RED).

As of late December, Kjellberg was also working out of a Disney office outside of London, according to the Journal. Going forward, he will presumably either sign to another network or continue to produce videos independently. His channel currently stands at more than 53 million subscribers and 14.6 billion views.