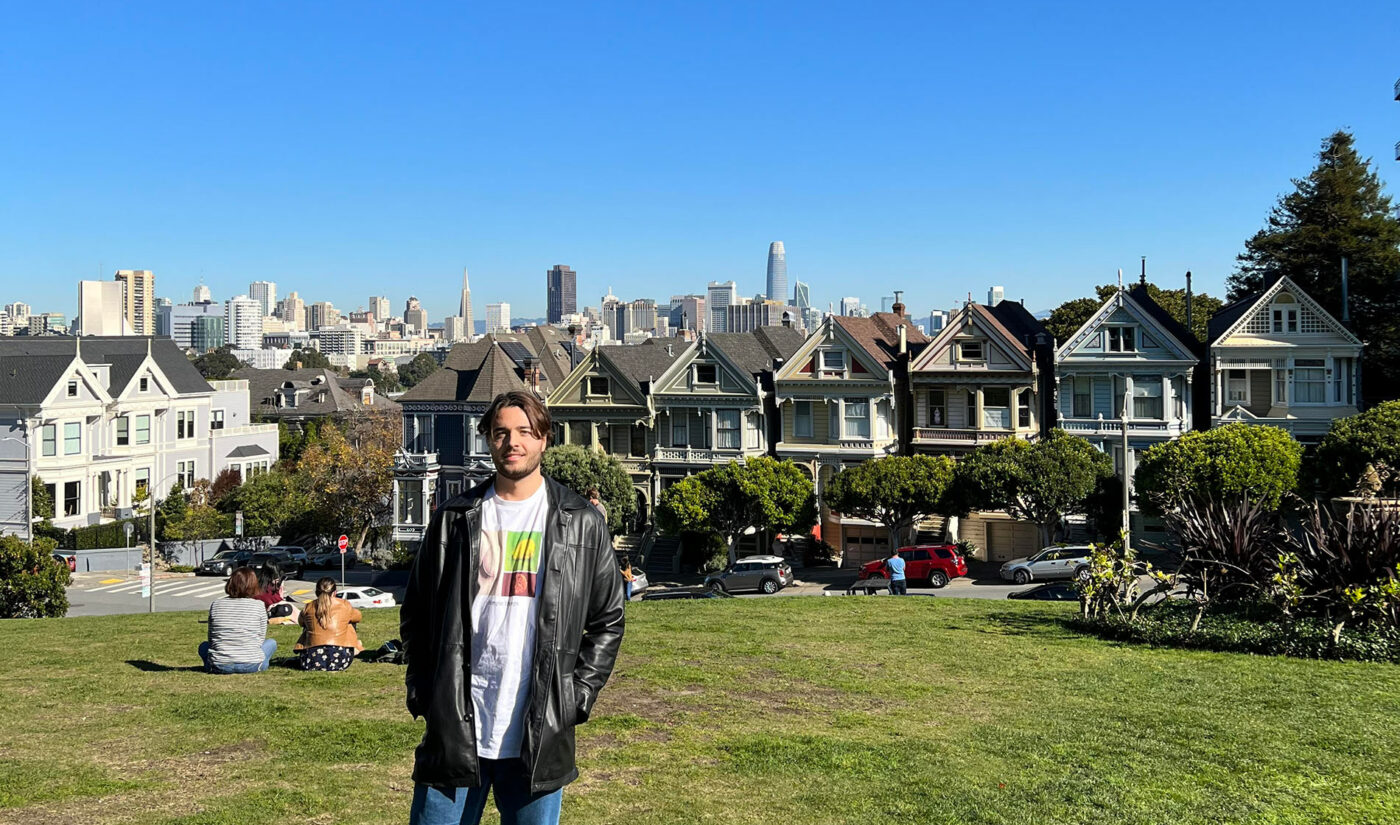 As a kid, Valdemar Dahl used to attend his father’s basketball practices. He’d hang out on the sidelines, dribbling a ball and watching the team work through drills and scrimmages. He enjoyed seeing his father play–but when it came to seeing NBA pros take the court, simply watching from the sidelines just wasn’t enough for Dahl.

So, in 2011, he started Golden Hoops, a YouTube channel where he actively archives everything from NBA player stories (like that of Kenneth Faried, whose 2011 drafting by the Denver Nuggets was, Dahl thought, tragically under-recognized) to daily plays-of-the-game recaps to compilations of season- or league-best moments.

For years, Dahl’s channel wasn’t profitable, but he didn’t care. His family and friends supported him, and he got to do what he loved best: edit videos about his very favorite sports league on earth. And even though Golden Hoops wasn’t monetizable, the skills he picked up editing for it helped him get gigs with entites like Bleacher Report and even the NBA itself.

Then, in 2017, Dahl’s situation changed dramatically. He was invited to join the NBA Playmakers, a BBTV-run and NBA-backed digital network that works with creators who make content about the league. Joining allowed him to not only monetize his content, but also gain access to things like high-quality footage of games, inside info from teams and players, and NBA production resources.

Since becoming part of the Playmakers, Dahl has doubled down on his content. In 2019, he committed to uploading one video every single day, and hasn’t missed a day yet. It’s this consistency, he says, that helped drive Golden Hoops to one million subscribers.

Valdemar Dahl: It’s funny because it was actually never a goal of mine. When I started out on YouTube back in 2011, those numbers were unachievable for 99% of all YouTubers. Because of that, I for many years cared more about views and comments. It took me seven years to reach 100,000 subscribers, and I remember vividly thinking to myself the night I hit 100,000 that it would take me another 63 years with that pace to hit one million subscribers. But I was honestly very satisfied with hitting 100,000 subscribers. So to answer the question, hitting one million subscribers is still surreal to me even five months later. It all happened so quickly, and that’s the beauty of YouTube, I guess! You never know when it’s your time to blow up and go viral!

I never call them my fans! They will forever be my viewers! They mean the world to me, and I’m very grateful that I have people from every country in the world watching my videos every day!

VD: My name is Valdemar and I come from Copenhagen, Denmark! Being in my mid-20s, I have, like many of my peers, recently graduated from college. I studied international business communication and marketing from 2017-2020, which I really enjoyed. However, I would still devote a lot of my spare time to editing! It was almost therapeutic for me to come home from a long day at college and edit basketball videos.

During my college degree, I would edit professionally for Bleacher Report, the NBA, and make short Instagram promos for the Road Trippin’ podcast by Richard Jefferson and Channing Frye. However, the editing started back in 2011 as a hobby right before I started high school! I remember telling my friends at high school that I had started a YouTube channel and they were all very supportive. My friends loved to tell random people that I had 1,000 subscribers and would get 10,000 views on my biggest videos–they were all very proud of me.

In 2017, I signed with NBA Playmakers, which allowed me to monetize my NBA videos on YouTube. However, my YouTube channel first blew up in November 2019, when I decided to do daily uploads, but more on that later!

Tubefilter: How did you become such a big fan of basketball/the NBA? What do you love about the sport?

VD: Definitely my dad was my main inspiration! He played basketball for 40+ years himself, and I can vividly remember going to his basketball practices as a kid. I would be standing on the sideline, dribbling a ball. And during my childhood we would play a lot of basketball in my free time.

He introduced the NBA to me when I was 13 years old, and I immediately fell in love with the league! There’s something very personal about the NBA that I love. It’s such a small league with very few players, and each player has such a big personality! It’s very easy to get close and feel like you are a part of a team.

Tubefilter: You started your channel a full ten years ago, and right from the start, you were making videos about basketball. What made you decide to get on YouTube way back in 2011? How has your content changed from then to now?

VD: I remember that watching the NBA wasn’t enough for me! I have always been very creative, so it came naturally to me that I wanted to put my own twist on the NBA YouTube community. So I started a channel where I could make my own videos with the music that I liked to listen to on a daily basis. It quickly turned into a huge passion of mine to edit videos.

I also started the channel because the Denver Nuggets recently had drafted Kenneth Faried. I was a big Denver Nuggets fan, so it was very upsetting that no one had made a promo about him after the draft night! So I decided to make a video myself, which is still available on my YouTube channel. However, besides that particular video, it was definitely the creative part that just kept me going. I remember thinking (and I still think this) that editing basketball videos is the most fun, creative thing I have ever done in my life.

Tubefilter: A lot of your videos are compilations, which seem like they must take a lot of time—and also a lot of knowledge about what’s currently happening in the NBA. How much time does the average video take to make, from start to finish?

VD: The average would be all day, every day! It’s an organic process that starts even before I open up my editing software. The video starts out just as an idea in my mind, and I constantly get ideas throughout the day. Sometimes I jump straight to Premiere Pro to work on a full-length YouTube video that I release the same day, and other times I prep for a future YouTube video. Some days I edit for only one long session, and other days I edit many times throughout the day.

VD: I like to catch up on the latest NBA news each morning when I wake up. I try to see what clips went viral and if any major highlight happened. Sometimes a specific highlight can inspire me to make a specific themed video. Let’s say LeBron James has a game winner against the rival Boston Celtics, then I can either make a video about the best game winners or make a video about rivals competing. The video ideas are definitely something I spent a lot of time about. I know a lot of my viewers like it when I cover last night’s events, but I also sometimes go the opposite route and make whatever just comes to mind regardless of what happened last night in the NBA.

I spend most of my day editing, but I like to take time off with family and friends. It’s important to have a good circle of people around you, and they definitely inspire me to be the best person I can be. However, with the pandemic and the world being shut down for nearly two years now, I have definitely seen it as an opportunity to go for the gold and devote most of my time to growing my YouTube channel.

VD: YouTube is my full-time job and has been since November 2019. I decided that I wanted to upload daily NBA videos on YouTube, and I’ve kept the streak going to this day.

Tubefilter: As you know, there is a LOT of sports content on YouTube. How do you make your videos stand out among the crowd?

VD: Staying consistent and having a passion for what you do.

I think consistency is key because it allows you to succeed in the end, regardless of what you’re doing or creating. It gives you discipline and makes it easier for you to reach your goal. You might fail in the beginning, but the biggest teacher in life is experience. It took me six years to get signed by the NBA Playmakers on YouTube, and it took an additional two years to blow up and make YouTube my full-time job. However, I was able to do that through my consistent work.

Second of all is passion. You’re not going to succeed if you don’t have a burning passion for what you do. I loved editing NBA videos and uploading them on YouTube: that was my passion! I never expected anyone to pay me. If my sole reason for being on YouTube was to make money, then I wouldn’t have been able to make YouTube videos from 2011 to 2017 for free. I would have found something else to do with my life. However, it was my passion for editing that kept me going and loving what I did. Some may say I was just lucky to sign with the NBA Playmakers, but I believe that my “luck” was the many years of preparation that met the opportunity of signing.

If you want to stand out, you have to have a burning desire for what you do and stay consistent.

VD: That I’m my own boss! I get to choose when I upload and I get to choose when I edit my videos. It gives me an enormous amount of freedom that I am very fortunate to have. I try to cherish that every day because I know most people unfortunately are not as privileged. I also love the fact that I get to read comments and can connect with my viewers! It is very gratifying to know how many people have watched my videos, but it’s even more gratifying to read all the comments, even if it’s criticism. It’s important to get feedback for your viewers because it helps you grow!

VD: I don’t exactly know what’s in store for me, honestly. All I know is that I still have a burning desire to make YouTube videos, and I want to keep staying consistent with my craft! I love to entertain, and seeing how big Golden Hoops is getting by the day, I’ll continue for as long as I possibly can!