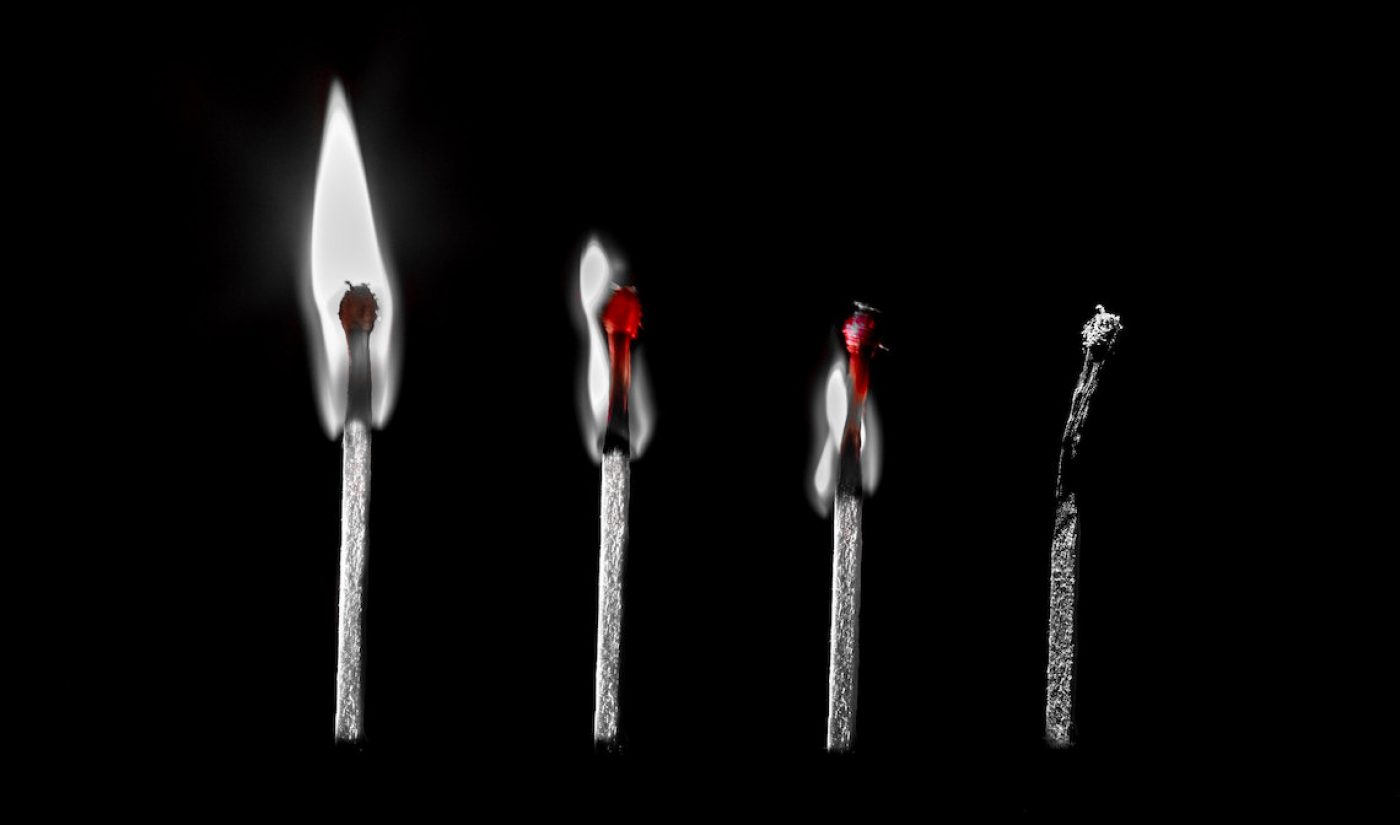 It’s better to burn out
Than to fade away

– My My Hey Hey (Out of the Blue), By Neil Young and Jeff Blackburn

Neil lied. His 1977 song was written after the drug-fueled deaths of bandmate Danny Whitten and rock’s founding superstar, Elvis Presley. But Young himself never burned out. At 73, he’s still making movies and music and noise. Not everyone burns out, though these days, it sometimes seems that way.

Burnout Is Now A Thing

His song came to mind this week, in part because the World Health Organization officially declared that job-related burnout is A Thing, a substantial work-related medical condition that merits serious attention. The WHO declared it to be “a syndrome conceptualized as resulting from chronic workplace stress that has not been successfully managed.” With all due respect to the WHO, no duh.

This week also brought news that Game of Thrones star Kit Harington checked into a Connecticut “wellness” facility for a month, right after he finished shooting the concluding episode of TV’s biggest show. In a bit of Iron Throne irony, Harrington said his darkest time came when his star was shining brightest, as he became GoT’s increasingly pivotal central character.

“It wasn’t a very good time in my life,” he said in a recent interview. “I felt I had to feel that I was the most fortunate person in the world when actually, I felt very vulnerable. I had a shaky time in my life around there — like I think a lot of people do in their 20s.”

It’s a sentiment many online influencers likely can sympathize with. Burnout seems particularly widespread among a group that is, routinely, the focal point of audiences every bit as big and passionate as Game of Thrones. And unlike an actor on a big show, influencers must do pretty much every role on theirs, performing, producing, writing, editing, posting on social and more. And if they don’t show up on “set,” they’re not making money.

The pressure to produce can be a brutal grind. Even “Superwoman” had to take a break last November from her punishing creative schedule. The formidable Lilly Singh dumped her Superwoman moniker, and a demanding twice-a-week video-production schedule, to focus on her mental health in 2019. Kudos to her, as usual, and an example for many others, as usual.

Influencers such as Singh are, in many ways, this era’s rock stars (she just got a talk show on NBC). They’re the ones with the Promethean ability to generate and command vast audiences out of nothing more than their creativity, will and ability to constantly, constantly churn out new material for YouTube, Facebook, Instagram, Twitter, and other platforms.

But to reach that audience, they’re lashed to the giant hamster wheels of social-media algorithms that dictate better visibility for the creations of those who post more regularly. Feeding those algorithms is a brutal, Sisyphean battle that’s wearing out more and more creators.

On Wednesday, I moderated a panel at Soul Pancake‘s “Four Conversations About One Thing” event, part of the site’s broader initiative around Mental Health Awareness Month. My panel on work and career issues featured, among others, long-time friend and Internet star Shira Lazar, who now has a syndicated radio talk show. During the panel, Shira spoke movingly about her own personal journey to a more centered daily spiritual practice, which she credited with helping her navigate major changes in her life and work.

Lazar and other panelists talked about the challenges we’re all facing, but especially in high-pressure, high-visibility jobs in entertainment, tech and social media. More importantly, they talked about ways to step back from the precipice, to find balance in our work and personal lives, and maybe find a way to keep doing interesting work, online, on air and elsewhere.

Dr. Habib Sadeghi, a Los Angeles-area integrative medicine specialist who’s written two books on healthier life practices, said we need to create more “headspace,” The term, now the name of a guided-meditation app popular in Silicon Valley, originally referred to the empty area inside a bottle of wine. That space is carefully calibrated; get it wrong and the wine either turns to vinegar or blows the cork. It’s a useful metaphor for humans, too.

“How can we create that headspace when we’re working with patients?” Sadeghi said. “We have to cultivate it, create it. People think that more is better. It’s not. If you don’t leave enough space, you blow the cork off.”

Writing Your Way To Sane, Stable, And Sustainable

Sadeghi (you can hear my Bloom in Tech podcast with the doctor here) suggests working on such standbys as finding a positive spin on even negative things, developing self forgiveness and gratitude. But he also emphasizes a practice of stream-of-consciousness writing for 12 minutes a day, a routine designed to purge the emotional negative charges we build up inside ourselves each day. His full prescription is much longer than that, and his approach is certainly not the only option. In fact, as a writer, the last thing I want to do at the end of the day is write more. But he suggested that finding a creative expression of emotion and introspection can be done with sound, music, or art too.

There are tiny reasons for hope that the technology world is starting to grasp the mess it  has made. Instagram said recently it may stop publicly showing like counts on posts, which may ease one source of what’s known in 12-step programs as Compare and Despair.

And YouTube this week announced that it will longer show exact follower counts, which will force Pewdie Pie and T-Series (not to mention their weirdly motivated fans) to find something else to do. But it too may also ease another source of one-upmanship among creators that seldom has positive effects.

As panelist and actor Romany Malco (A Million Little Things, Weeds) put it when we talked about the impulse so many of us have, especially on social media, “Comparison is career kryptonite.”

By that, he means constantly comparing your perceived progress and success will eat you up, particularly if you’re using the perfected, typically not very representative visions of  other people’s lives that are created in social-media feeds. A little less specificity in public analytics may help.

Counting Less Could Count For More

But if YouTube, Facebook and the rest want to really show they’re building a better Internet experience for more than their shareholders, they have plenty of work  ahead. Frankly, I’m not counting on people such as Mark Zuckerberg to show up on this issue anymore than he did for the Canadian Parliament this week.

For instance, I have talked in the past with former Google executives who tried to get the company’s engineers to tweak the algorithms that reward constant posting, to ease the pressure on influencers to constantly produce.

But the engineers pushed back, they said. More posting drives more engagement, and more engagement is important to company success. Besides, they were told, it’s not one algorithm, it’s multiple algorithms that interact in difficult-to-anticipate ways. And double besides, there are always more influencers if the current ones burn out.

That disposable attitude toward people is exactly what’s wrong with the online world we have today. Organizations such as the actors union SAG-AFTRA are trying to organize influencers, their managers and agents to push for better conditions. It’s an uphill battle, but a worthy one I strongly support.

In the meantime, the World  Health Organization is including “burn-out” in the next edition of its handbook of recognized medical conditions. See if any of these apply to you:

If that’s you in your work, it’s time to pull back, and make some headspace for yourself before that cork of yours blows, or your emotional wine becomes vinegar. The internet has unlocked many wonderful things,  and allowed many creative people to showcase their wide-ranging talents.

But it comes with some downsides, and social-media platforms’ inhuman approach to the humans who make them popular destinations must evolve. And so do we, as we find healthier ways to move forward and be all that we are.