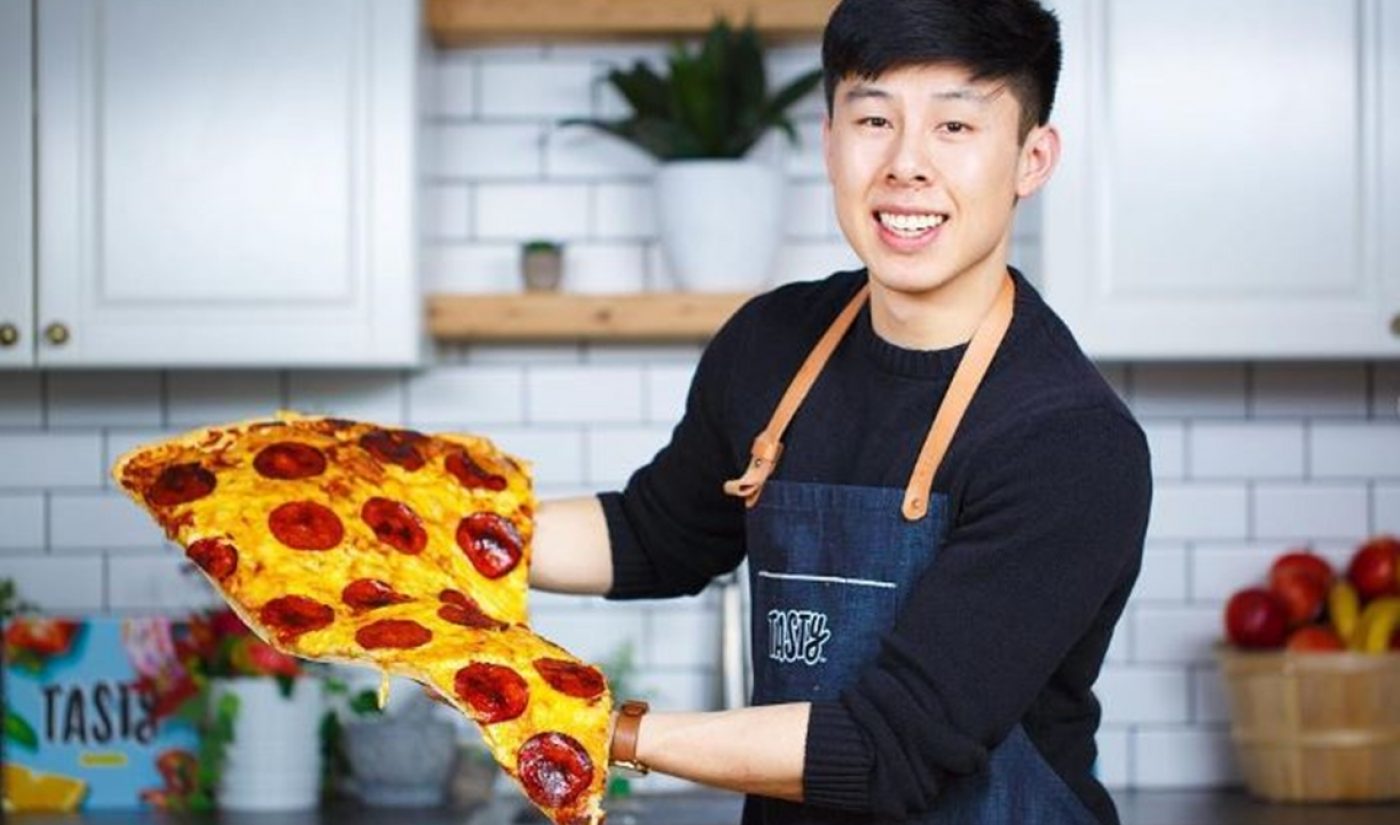 BuzzFeed’s viral food brand Tasty is continuing its foray into long-form programming with a new show and returning hit arriving on YouTube this weekend. Both shows are part of BuzzFeed’s broader strategy of creating more episodic series across Facebook and YouTube this year.

“Tasty revolutionized food media by popularizing the short-form top down recipe video format,” says Jody Tixier, Tasty’s supervising video producer. “While top-down recipes continue to dominate our viewership on platforms like Facebook and Instagram, long-form shows bring in the majority of views on YouTube, and have shown promising performance across all of our platforms.”

The latest addition to Tasty’s long-form slate is Making It Big, premiering on Saturday at 11 am ET. On the show, producer Alvin Zhou (pictured above) will endeavor to concoct giant-sized versions of go-to eats, from chicken nuggets to an omelette consisting of 100 eggs. Zhou joined BuzzFeed in 2015, and is behind some of Tasty’s most viral outings to date, including I Made A Giant 30-Pound Burger (17 million views, see below).

“Nothing makes me happier than cooking for my friends, so I thought it would be fun to surprise them with huge versions of their favorite foods,” Zhou tells Tubefilter of the inspiration behind Making It Big. Zhou adds that one of his favorite episodes from the forthcoming season features a sumo wrestler who is challenged to consume one of his creations. “I didn’t think a human being would be capable of such hilarious facial expressions; his reactions in Japanese had us collapsing on the floor in laughter.”

Additionally, this Sunday will see the return of Tasty’s I Draw, You Cook, in which two Tasty chefs are tasked with bringing a children’s drawing to life. Season one counts more than 70 million views, and season two will be themed around mythical and fantasy creatures. Episodes range in length from roughly eight to 13 minutes.

Both Making it Big and I Draw, You Cook will comprise six episodes. And they arrive on the heels of other long-fiorm bids by Tasty, including the Hannah Hart-hosted Edible History, a Facebook Watch series where Hart chats food historians in each episode and attempts to recreate ancient recipes with period-appropriate techniques. Edible History will roll out to additional platforms this year.

Other long-form Tasty shows include: Tasty 101, which teaches viewers new food skills through tutorials; Eating Your Feed, where non-chefs are challenged to take on viral food hacks; and Behind Tasty — a behind-the-scenes look at the Tasty kitchen. Each of the aforementioned series are available on YouTube, Hulu, and Amazon Prime Video. Tasty also produces Made By Hand (on YouTube and Amazon Prime) and the American Express-sponsored Friend In Town, which explores notable eateries across America.

“We’ll be piloting multiple new shows over the course of 2019,” Tixier says. “We’re also experimenting with new lightweight repeatable formats both inside and outside of the Tasty kitchen — like profiling amazing chefs, restaurants, and dishes in the Los Angeles and New York food scenes.”

“In just a few years, Tasty has transformed from an online juggernaut to a fully diversified leading global food brand,” Tixier says. “Beyond expanding into premium long-form creative content, Tasty now has best-selling cookbooks, a mobile app that helps our audience cook their favorite Tasty recipes, an ever-expanding kitchenware line at Walmart, and global CPG products like spices and ice cream with additional products and partnerships launching in 2019.”