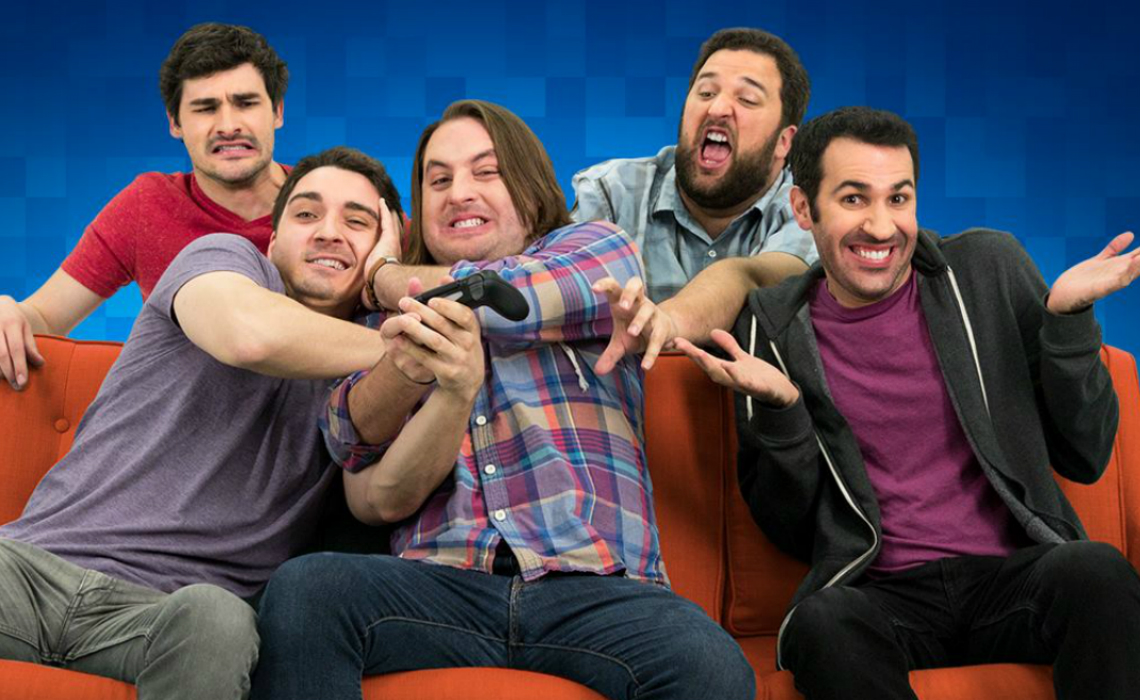 When Defy Media abruptly shuttered in November, it left dozens of creators, hundreds of employees, and millions of dollars stranded in limbo. Like most people who worked with and for Defy, the folks behind The Warp Zone (a sketch-and-musical smorgasbord for fans of all things geek) had no idea the company was going down until it was already gone.

Because Defy owned The Warp Zone’s intellectual property, and Defy’s bank had seized control of all its assets, creators Michael Davis, Brian Fisher, David Odom, Michael Schroeder, and Ryan Tellez were unable to make Warp Zone-branded content following the closure. They were also locked out of The Warp Zone’s YouTube account, and were only able to post one last video to let their 2.2 million subscribers know what had happened:

Now, five months after that video was posted, The Warp Zone’s situation has radically changed. That’s because, in February, fellow Defy channel Smosh was acquired by Mythical Entertainment — the production company owned by YouTubers Rhett McLaughlin and Link Neal.

While under Defy’s umbrella, Smosh and The Warp Zone frequently collaborated, and the creators behind both channels had become friends. So, when Smosh and Mythical were working out their deal, Smosh put in a good word, and Mythical took the opportunity to do some good in the creator space: it acquired The Warp Zone by counting it as one of Smosh’s assets…and then turned around and handed 100% control of the channel and its intellectual property back to Davis, Fisher, Odom, Schroeder, and Tellez.

Which brings us to now, one day before The Warp Zone’s set to launch its first new piece of content — an ironic video about what would happen if Batman lost control of Wayne Enterprises and had to crowdfund to keep his crimefighting operation going. They posted a short update video last week, letting fans know (in traditional musical style) that their homecoming is imminent.

Ahead of the video’s release, Davis, Fisher, Odom, Schroeder, and Tellez sat down with Tubefilter to give us the nitty-gritty details about how they went from losing control of everything they’d created to making a successful return to YouTube.

Tubefilter: Who are you all?

The Warp Zone: The Warp Zone is Michael Davis, Brian Fisher, David Odom, Michael Schroeder and Ryan Tellez. We met in a college film club in 2007, where we discovered a shared love for movies, video games, and making funny videos.

Tubefilter: What’s your channel all about? When and why did you start it?

TWZ: Fueled by our passion for filmmaking, in 2010, we all moved to Los Angeles, got production jobs at Maker Studios, and started The Warp Zone YouTube channel. The Warp Zone is a sketch comedy channel where we make funny videos about our favorite pop culture topics like video games, superhero movies, and TV shows. We started it as a hub for us to continue creating comedy videos together in LA after graduating from college.

Tubefilter: You originally joined Alloy Digital, which later became Defy Media. How did you end up with Alloy?

TWZ: In 2012 to 2013, we were working as full-time employees at Maker Studios in various jobs such as editing, technical directing, and optimization. The Warp Zone channel was a side project we worked on nights and weekends (it was also signed with Maker). Over a couple of years, we had built up a decent following and some momentum we wanted to capitalize on. We were feeling stunted by our job situation, though, and were unsure if Maker was going to be the best fit moving forward. The company had changed a lot during our time there. We literally saw them go from supporting 40 channels to 40,000 channels. So, we started looking at other multichannel networks with a more focused situation where we could get more attention.

Alloy Digital had recently acquired Smosh and was very interested in adding to their owned and operated brands, which also included Clevver and the Escapist. Hearing them talk about their focus on owning and developing a few brands they believed in sounded like the perfect situation for us. Though the idea of losing our intellectual property on the surface felt scary, the opportunity of working full-time producing videos alongside some of the biggest names in the industry seemed too good to pass up.

In the end, in exchange for The Warp Zone IP, we were offered full-time jobs with salaries and benefits, plus stock. Lots of companies were getting sold around that time, so the company stake seemed like an exciting prospect. Let’s just call that foreshadowing for now.

TWZ: Early on at Alloy Digital, things were going great. We were very warmly welcomed in and given access to amazing production facilities, resources, and people to help produce our videos and grow the brand. We were also pretty immediately collaborating with talent from Smosh and Smosh Games, who became fast friends of ours.

Then, three months in, without warning, Alloy Digital merged with Break Media to become Defy Media, and everything changed. Immediately, with the additions of bigger brands like Screen Junkies and Break, we were a low brand on a bigger totem pole, and it seemed like no one from the Break side really knew who we were. We had a meeting where we had to explain who we were and what we did.

The fallout was that they wanted us to work on other channels at the company besides just The Warp Zone. We were asked by the new head of programming to develop honest trailers for gamers, so we ended up writing and producing the first batch of Honest Game Trailers for the Smosh Games channel. To be honest, it was a bit of a bummer to be forced to work on stuff besides The Warp Zone three months after selling our brand under the premise of working on Warp Zone full-time, but it was good production experience, and we love both of those brands.

That period was challenging, but things smoothed out and after a good first year of growth and brand deals, the company let us go back to working on The Warp Zone full-time. However, still being the short stack at the company overall, we were mostly forgotten about. For the next couple years, we operated on an island within the company.

It wasn’t all bad, though. They gave us a healthy budget to produce content and a lot of creative freedom. We operated like a mini-production company within the company, and the autonomy was nice. We definitely would have liked more support to help grow the brand, but the experience of handling our own productions and finances was extremely valuable.

Every year we’d have check-ins where they would make sure we were profitable, and as far as we understood, we were, so they more or less left us alone. As the company started laying off employees and selling brands, we became increasingly concerned about our future, but the higher-ups kept saying everything was fine and heading in the right direction in company meetings. Concurrently, as the company got smaller, we were finally receiving more attention, and it was starting to feel like early Alloy again. No one had any idea how bad things really were…

Tubefilter: What happened when Defy went under?

TWZ: Like all other Defy employees, we had close to no warning before the shutdown. We were completely stunned, and that last day was one of the most surreal and bizarre moments of our lives. The rug was pulled out from everyone, and we didn’t just have to say goodbye to Warp Zone that day, we had to say goodbye to all the awesome Defy employees we had worked with for over five years there. It was emotional and chaotic. The office scene looked like that of an insanely over-the-top company closure you’d only see in a movie like Fun With Dick and Jane. It’s a surprise nothing ended up on fire!

Tubefilter: And what happened post-fiasco?

TWZ: Post-fiasco, our access to The Warp Zone YouTube channel and all other social media accounts was removed. It was such a weird feeling. For the first time in eight years, we couldn’t view anything on the back end of the channel. We were allowed to post one final “see you later” video, where we told fans we had to go on a forced hiatus and weren’t sure when we’d be back, but that was all we could do. The bank had seized Warp Zone.

After the initial shock, we were able to track down the firm handling the sale of Warp Zone and the rest of Defy’s assets. When they realized we weren’t going to be ones to help recoup the bank’s massive debts, they never spoke to us again. It appeared the future of Warp Zone was out of our hands.

Months passed, and we would hear rumors about the progress of the sale, but unfortunately we weren’t really in the loop. Eventually, we received word from Ian Hecox (Smosh) and the Mythical Entertainment team, and were absolutely blown away by how swiftly our fortunes changed. The Warp Zone was rescued by Mythical during their acquisition of Smosh, and in a miraculous turn of events, they offered us full ownership of the brand back!

It was an incredible and amazing gesture. We seriously can’t overstate how ecstatic and grateful we are for their efforts.

Tubefilter: Where do you go from here? What are your plans for the future?

TWZ: We’re incredibly excited that we have full control over The Warp Zone again. We feel creatively reinvigorated and plan to take our content back to its roots and really focus on our relationship with our audience, something that we unfortunately failed to do under Defy while we were focusing on views and making sure we were profitable.

We have our first new sketch coming out this Friday, April 5. The video is a Batman sketch that imagines Batman lost the funding of Wayne Enterprises, and had to pay for his crime-fighting ways independently through crowdfunding and odd jobs.

Along those lines, we’ve also started a Patreon and have some awesome new perks there to connect with our fans better than ever before!

Tubefilter: Anything else we should know?

TWZ: If you want to hear more about our Defy story, we have a tell-all video coming Tuesday, April 9.

Also wanted to mention that we have signed with Studio71, who we have been incredible partners so far. John Carle is our manager there. We shot our comeback video at their production spaces, and they’ve been a huge help during this transitional relaunch period.

All in all, it’s been a crazy few months, but we’re super excited for the rest of this year and beyond!