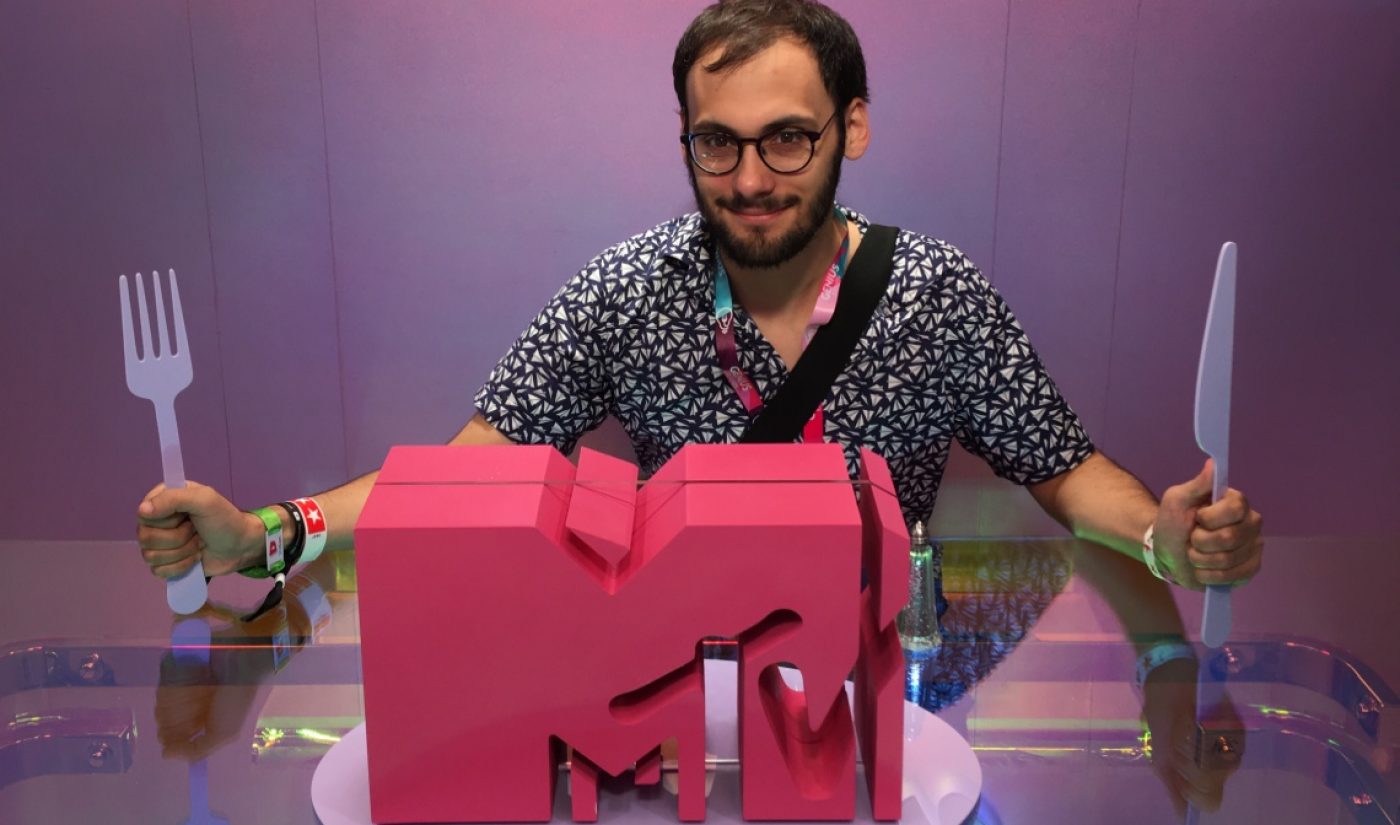 Earlier in June, we announced the launch of the Tubefilter Best In Show Awards, which honor the best booths and lounges at VidCon. Now, we’re doing that thing we said we were going to do. On VidCon’s exposition floor, I lolloped among merch tables, bubblegum-colored installations, and hordes of passionate online video viewers to discover the very best exhibitioners at the online video industry’s top yearly get-together.

As a reminder, the results of my exhaustive research are separated into three categories:

Meanwhile, on the internet, you all selected a fifth booth to receive the Audience Choice Award. The winners are listed below. 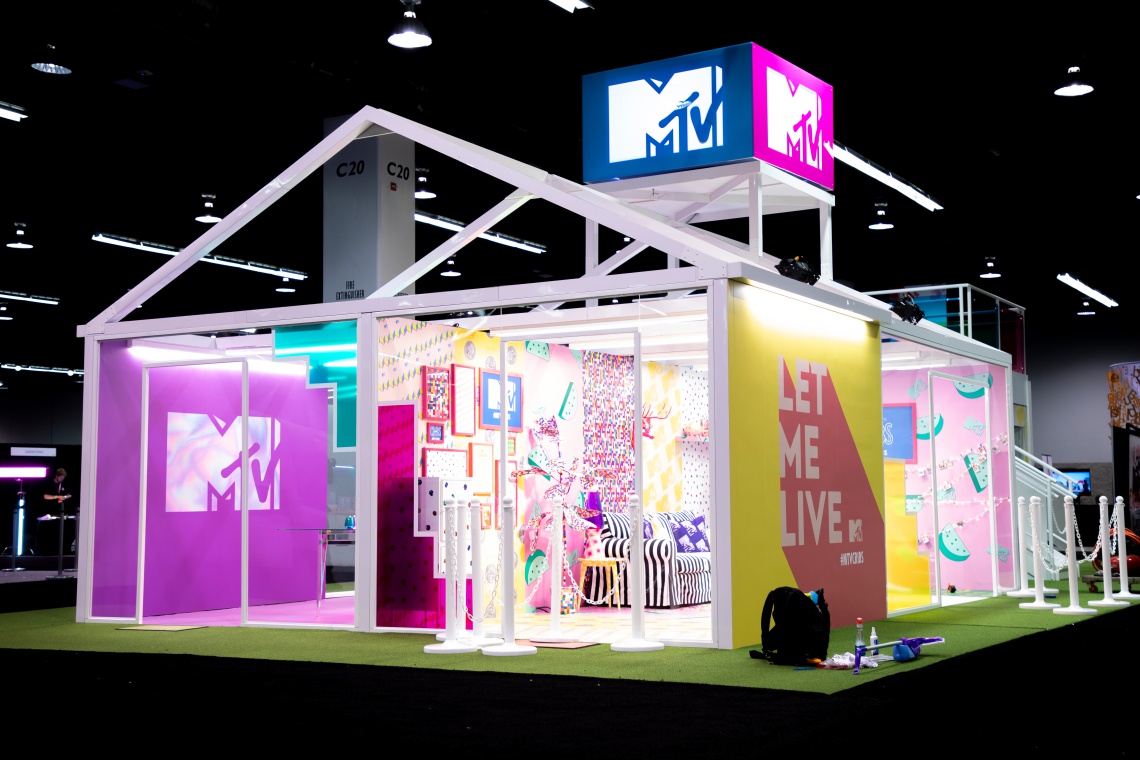 When media company Viacom acquired VidCon earlier in 2018, we were curious to see how the deal would affect future iterations of the annual event. One change that came to our attention regarded Viacom-owned MTV, which announced its plan to put together its first-ever VidCon.

And wow, did MTV ever pull out all the stops. Inside a spacious booth, the network delivered a stunning tribute to its classic show Cribs, which recently returned as a Snapchat Discover series. Like a voyeuristic viewer enjoying a televised tour through a celebrity abode, I relished the many interactive touches of MTV’s booth. There was a dining room where I snapped the pic you see atop this post; a false fridge that opened into a crimson-colored passageway; and a wall of singing bigmouthed bass that screamed “YAS QUEEN!” when activated.

Where MTV really won this award, however, is in the details. If you’re willing to adorn your salt and pepper shakers with matching colored designs, thus curating your VidCon experience down to the granular level, you’ve earned the “Wow Factor” for sure. 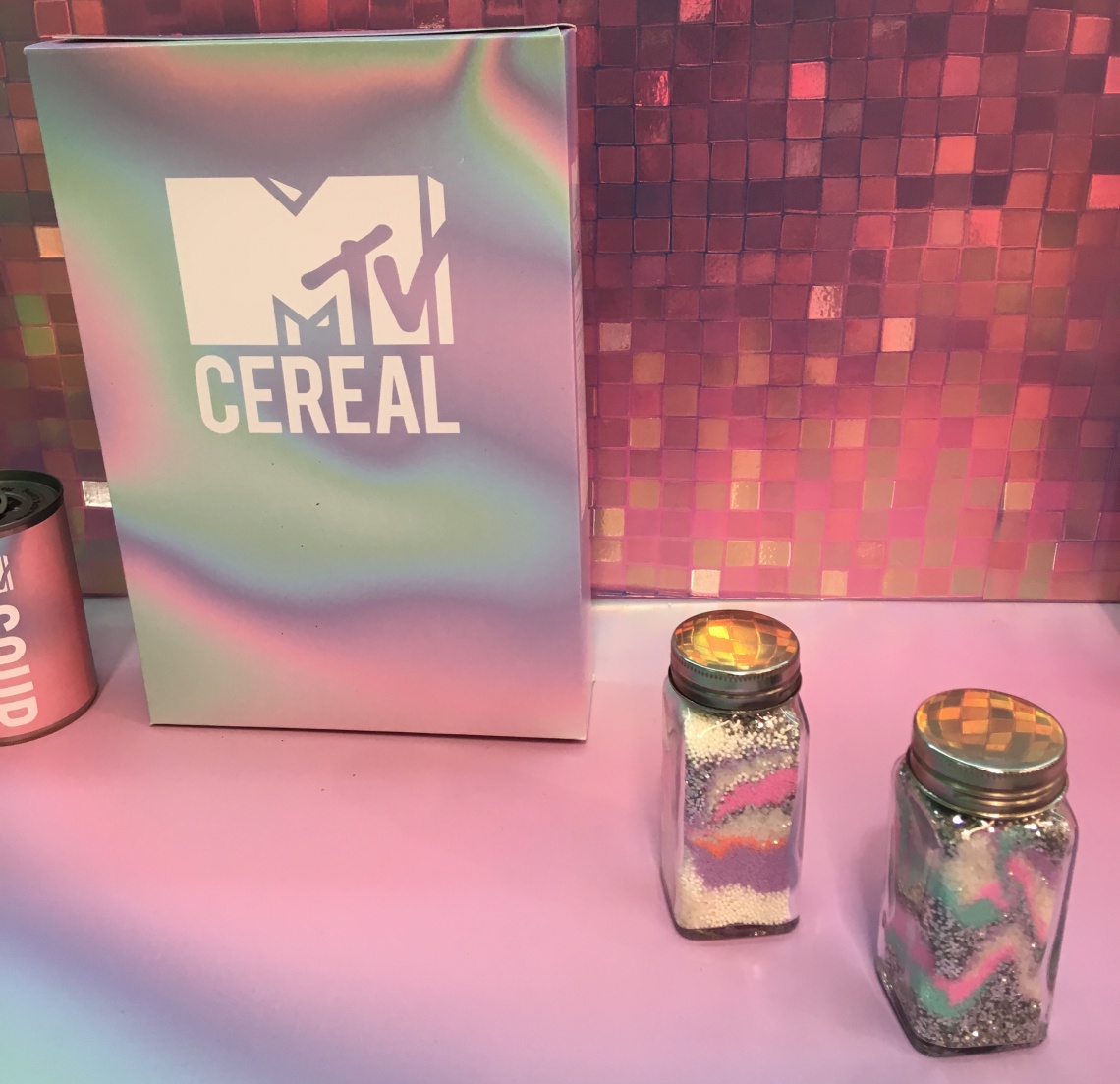 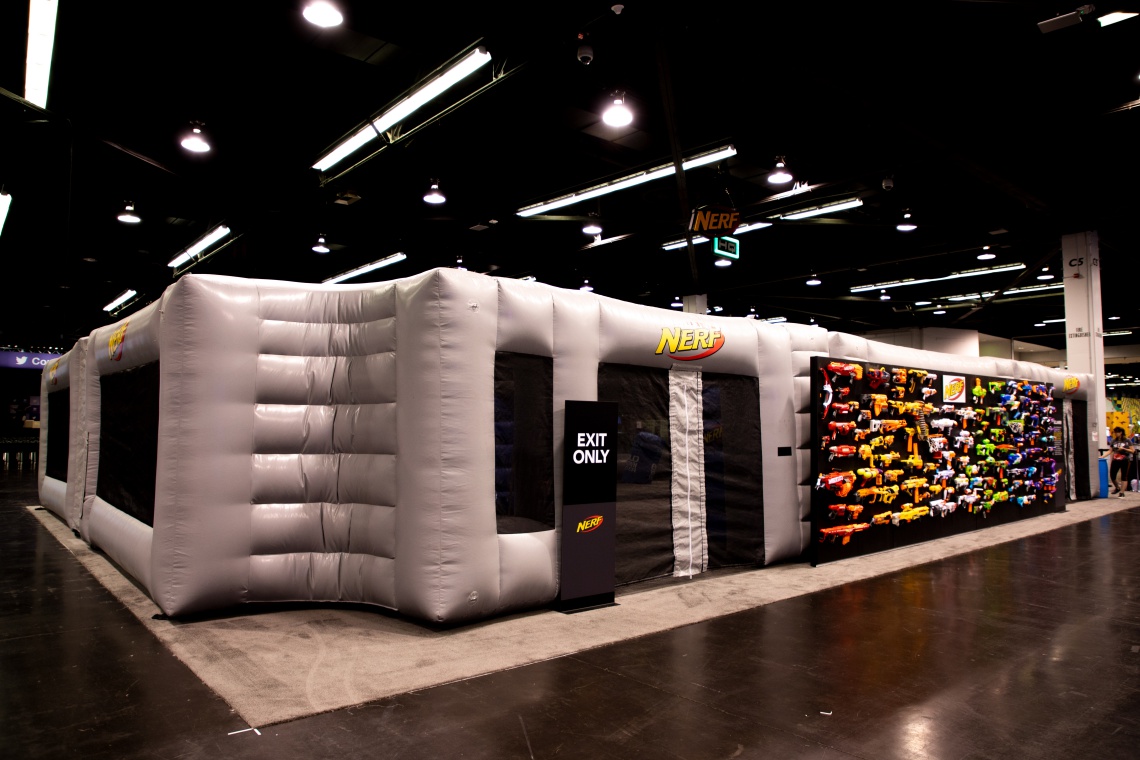 Each day at VidCon, thousands of Instagram Stories are shared, and enterprising brands are ensuring their booths get a piece of that action. To be sure, there plenty of booths that doubled as excellent Instagram content. Lego arranged some of its blocks into a rainbow pattern that spilled onto the floor in an artistic pattern (be careful you don’t step on it). Australian microphone company Røde brought a comic book-inspired design to its hub. And mattress company Serta provided attendees with a massive bed to flop down on.

But for me, no exhibitioner stirred up more fuzzy feelings than Nerf, which brought me back to my childhood with a massive, color-coded wall filled with its products.

Inside the toy company’s booth, a massive Nerf war was taking place, but I had no time for that, because I was too busy snapping pictures of this array. 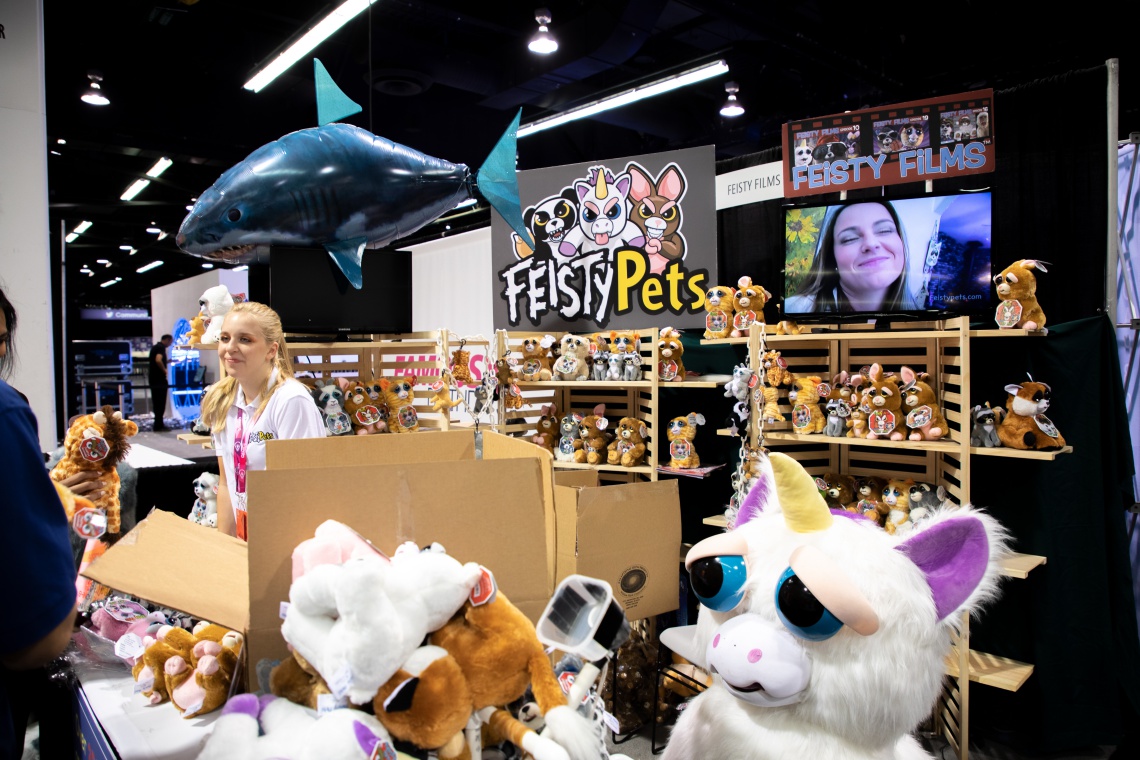 The Feisty Pets toy line offers plush animals that can change from cute to scary with a single motion. At VidCon, those toys were sold in a fitting manner. Visitors to the Feisty Pets booth could choose from a selection of adorable creatures to purchase.

The scary part of the experience was the manner in which these toys were delivered. After a plushy was purchased, it was loaded into a miniature catapult, which a Feisty Pets employee used to shoot the product toward its intended purchaser. Because, as we all know, toys are best when delivered via onager. And for me personally, the fear of dropping my new toy in front of dozens of onlookers is more terrifying than the grimace on any Feisty Pet. For that reason more than any other, I opted not to make a purchase. 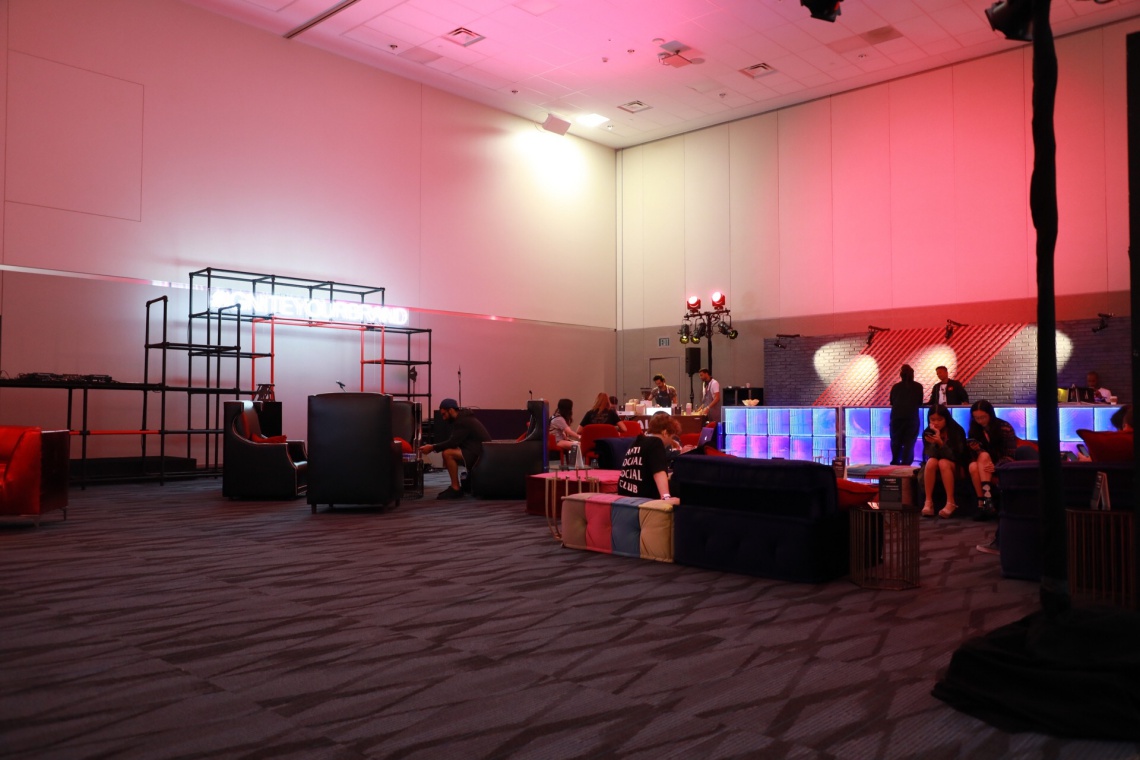 YouTube-owned FameBit usually serves as a matchmaker for creators and brands, but at VidCon, it also served as a refuge for beleaguered attendees. Its tastefully low-lit lounge offered all the typical accoutrements we’ve come to expect from VidCon lounges. There was high-end cold brew coffee via fellow VidCon exhibitioner Califia Farms, a good number of low-slung couches and chairs, and quite possibly hundreds of ports for charging phones.

What made the FameBit Lounge distinct was its ties to the YouTube community. Among other activities, attendees could use the space to play a game of “cupcake roulette” presented by The Icing Artist, pick up a nail look inspired by Gabby Morris, and snag a headshot from Misshattan. Visitors entered the FameBit Lounge feeling flat and worn out. They left energized and inspired by the work of the creative people featured therein. 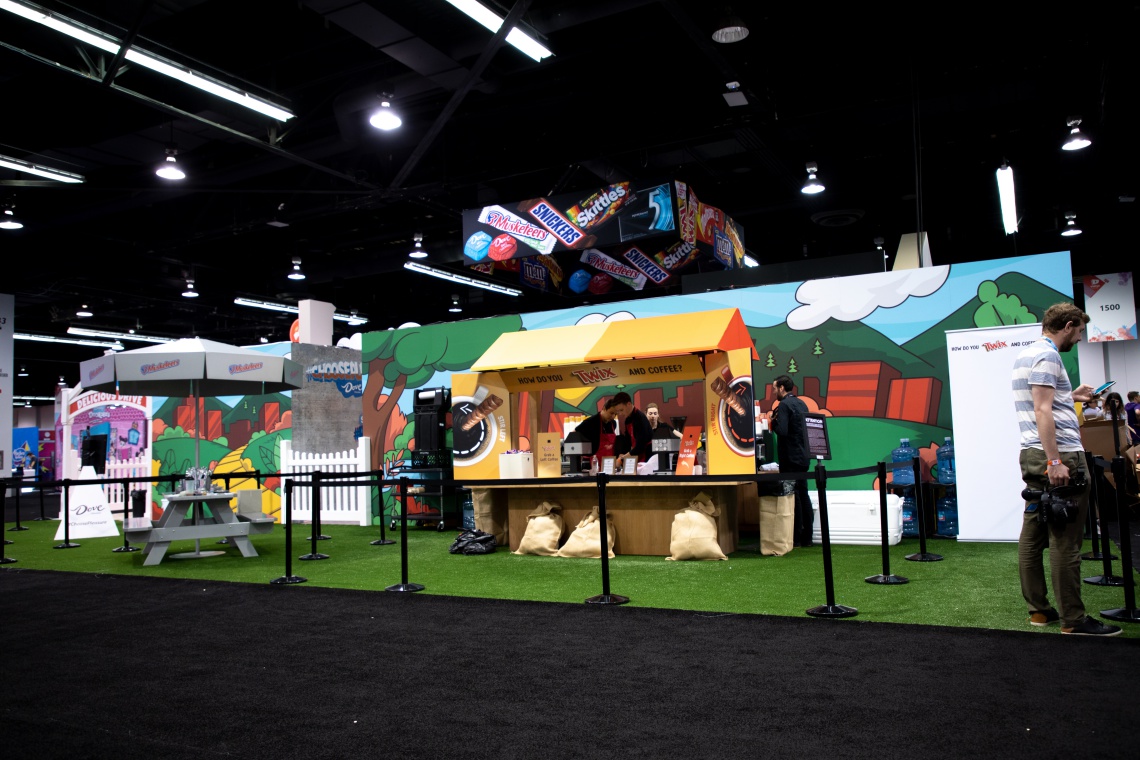 If you want to earn votes in a fan content, it helps to sweeten the deal. Mars, the candy company behind iconic brands like Snickers, 3 Musketeers, and Twix, delivered a VidCon booth seemingly pulled straight out of a Willy Wonka factory. The design was bright and cheerful, and the available activities were themed around sweet treats. Among other fun fare, visitors could check out a silvery 3 Musketeers-inspired installation, get a Snickers tattoo, and eat so much chocolate. Delicious.

A big congrats to the imaginative minds behind the booths above, as well as everyone who had a presence at VidCon. when not learning about behavioral psychology or ASMR videos, the expo floor was definitely a space to have a very good time.