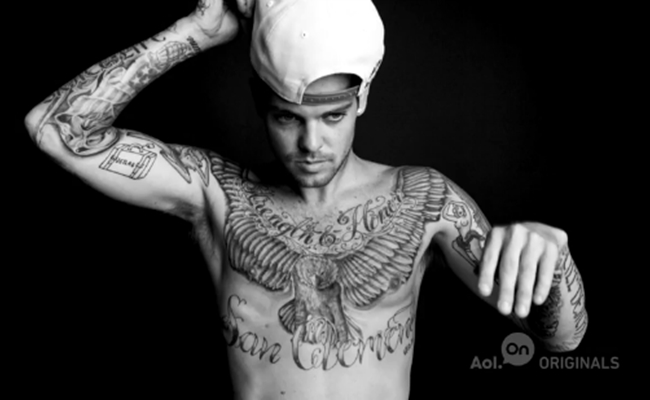 Athletes Show Off Their Sweet Tats In AOL’s ‘My Ink’

A new AOL web series examines the body art adorning the skin of professional athletes. It’s called My Ink, and it has launched with stories from six different athletes about the origins of their tattoos.

My Ink will reel in plenty of viewers with its celebrity appeal. The first guest is the Baltimore Ravens’ wrecking ball of a running back, Ray Rice, and the other five releases profile a wide array of top athletes, including skateboarder Ryan Sheckler, mercurial baller J.R. Smith, and women’s basketball standout Brittney Griner.

One of My Ink‘s recurring themes is the understanding that tattoos do hurt like hell, and that the way to best endure this pain is by being a super-strong athlete. The most interesting moment of the Rice episode comes when he receives three tattoos at the same time. Mere needles cannot stop him.

There are a lot of tattoo-related shows out there, with Sanctioned TV’s Tattoo Stories serving as My Ink‘s closest analogue. It’s unclear if AOL’s effort will rise above what could be its fatal flaw: its subjects are famous for their physical skill, not necessarily their verbal eloquence. As cool as these athletes are, you may leave wishing they workshopped their tattoo tales before telling them on camera.

There are still six My Ink installments still to air, so we may get some more interesting stories in the episodes in the back half. I’m holding out hope for one on Chris Andersen. A look at the Birdman’s tats would be fascinating and fun to watch over a few days. (Read: Chris Anderson has a LOT of tattoos.)