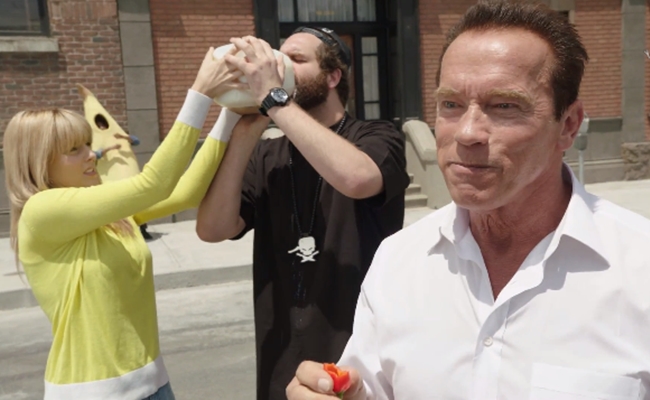 Arnold Schwarzenegger Pumps Us Up For YouTube Comedy Week

Pre-roll advertising has been a big part of YouTube’s strategy regarding YouTube Comedy Week, as the site has created several short spots featuring some of the big names who will be featured at the event. After creating eight short videos starring funny people such as Sarah Silverman, The Lonely Island, and Rainn Wilson, YouTube has released its biggest ad yet, featuring none other than the Governator himself, Arnold Schwarzenegger.

Ahnold reveals in the spot that he is a big comedy fan and gives his endorsement for YouTube Comedy Week, all while acting way cooler than all of the girly men on YouTube. He swats away Kyle from Good Neighbor‘s pitiful attempt at a picture, Terminates the Harlem Shake, and shows Harley from Epic Meal Time that a true manly man doesn’t need Daily Grace to pour milk into his mouth in order to handle the spiciness of a ghost pepper.

JASH, which produced the video, also offered a behind-the-scenes video on its buh channel, where all the various YouTubers swoon at the opportunity to meet Schwarzenegger and his huge muscles.

Comedy Week’s slogan is “this better be good”, and given the star power and resources the site has sunk into the project, I feel very similarly. Comedy Week videos will be hosted on a currently inactive channel, with a “Big Live Comedy Show” kicking things off this coming Sunday at 8 PM EST. We can’t tell until then whether it will be good (though the lineup suggests as much), but if the endorsement of the world’s most famous Austrian bodybuilder is any indication, it will at least be big.