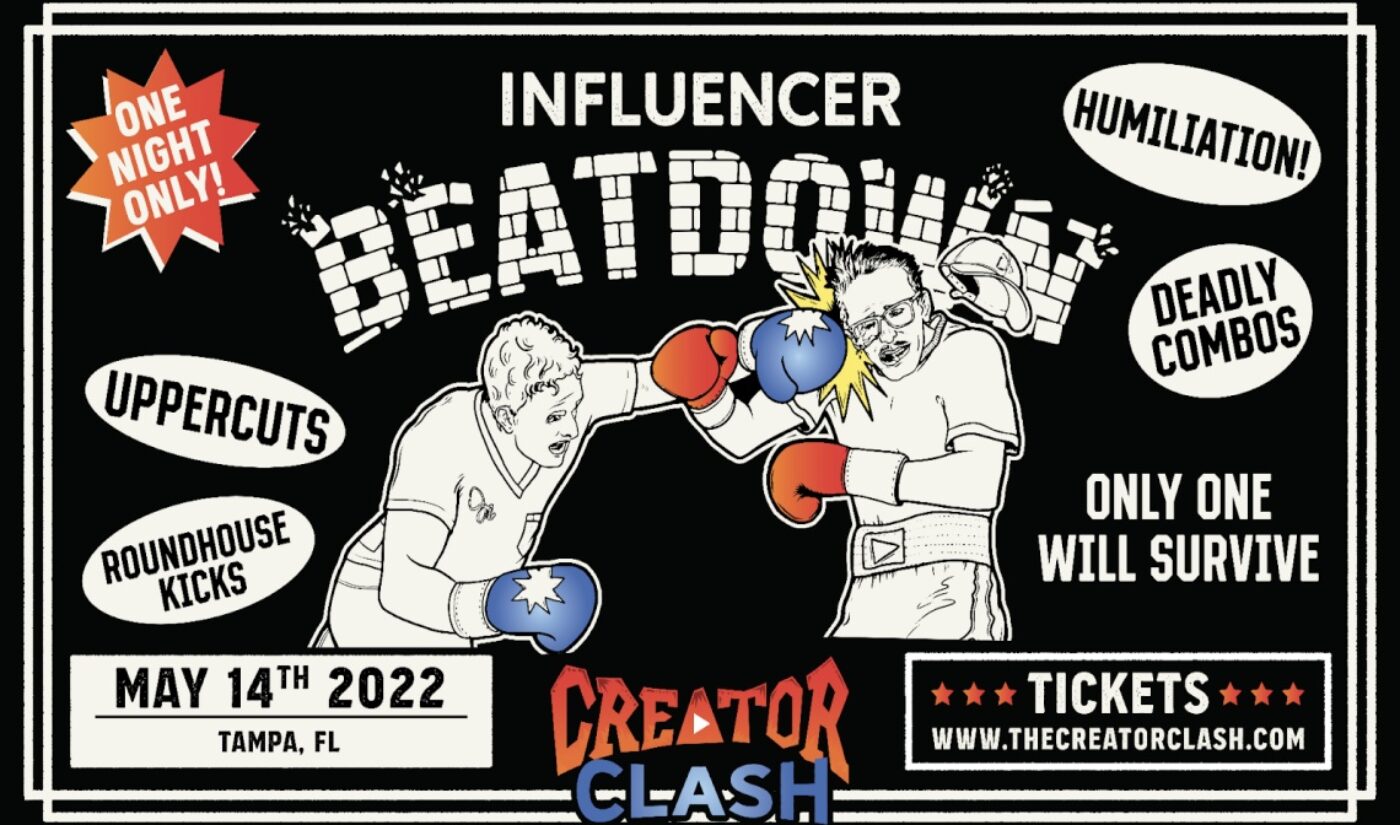 Creator vs. creator boxing matches have grown in popularity since KSI and Logan Paul fought to a draw in 2018, and an upcoming event figures to be a defining moment in the world of influencer combat. On May 14, Tampa will play host to the Creator Clash, a charity boxing event organized by the outspoken YouTuber iDubbbz.

iDubbbz is certainly pugnacious, and at the Creator Clash, viewers will find out if he is pugilistic as well. He is one 16 creators who have been confirmed to fight; the other 15 are Alex Ernst, Arin Hanson of GameGrumps, H3Podcast producer AB, DAD, Doctor Mike, Graham Stephan, Epic Meal Time sauce boss Harley Morenstein, Hundar from Muscle Party, I did a thing, Justaminx, Michael Reeves, Odd1sout, Matt Watson and Ryan Magee of SuperMega, and Yodeling Haley. A “choose your character” screen on the Creator Clash website has room for 22 fighters, which suggests there will be 11 matchups in total. According to a press release, the as-of-yet unknown participants will be announced at a later date.

The event’s website also lists a few of the specific matchups that are slated for the upcoming Clash. The undercard includes a bout between female stars Justaminx and Yodeling Haley as well as an old-school YouTube battle between Harley Morenstein and Arin Hanson. The main event, however, will pit iDubbbz himself against the hunky physician Doctor Mike. When iDubbbz first thought up the idea for this gathering, the so-called “content cop” wanted to take on frequent target RiceGum, but as he explained in an October 2021 video, the controversial YouTuber ultimately dodged his challenge.

One would think that Doctor Mike has a significant advantage over iDubbbz based on physique alone, but all of the boxers-to-be are training hard and are preparing for the Clash in their own ways. iDubbbz said he got LASIK eye surgery so that “my contacts don’t roll to the back of my head when I inevitably get punched in the face.” Morenstein, meanwhile, accidentally punched himself in the face while going through his sparring regimen, and Matt Watson dropped a diss track about his opponent Nathan “DAD” Barnatt.

“These creators want to show respect to boxing, while putting on an entertaining show that reflects their personalities,” iDubbbz said in a statement. “It was really important to us that the creators took this experience seriously, and let me tell you – they absolutely have. They have been training for months, and we can’t wait to show you what they can bring to the table. Influencer boxing has previously been very money-driven and our goal is to bring attention back to the sport, while delivering fun and interesting personalities for an all-around great show for some great causes.”

The “great causes” iDubbbz speaks of include the American Heart Association, which will receive some of the proceeds from the pay-per-view event. Ultimately, the plan is to deliver the Creator Clash’s profits to charity; additional beneficiaries will be announced closer to the May 14 showdown.

Access to the Creator Clash will be gated by Moment House, which gives influencers the infrastructure they need to monetize their live events. The production of the pugilistic party is supported by Real Good Touring. Those two companies previously worked together on the premiere of How Did We Get Here, a documentary about popular gamer Jacksepticeye.

Early bird tickets for the Creator Clash are now on sale via the Moment House website. The early bird price, which will be available for two weeks, is $19.99. After that period, tickets will cost $24.99 until the day of the event, when the price will rise to $34.99.