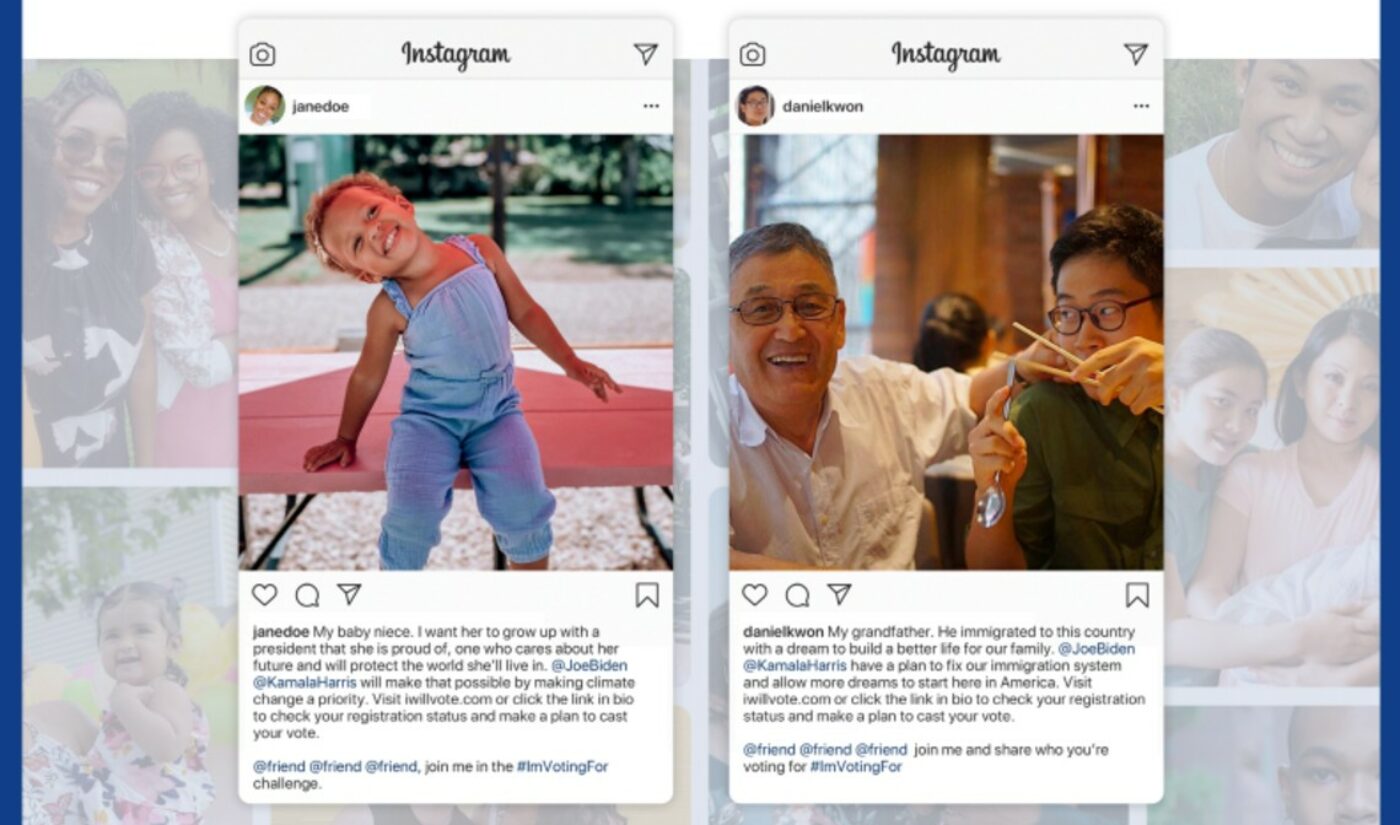 Portal A, a digital studio noted for its work with YouTube, its original productions, and a portfolio of high-profile branded content endeavors, has been tapped by Democratic presidential nominee Joe Biden for a social media campaign dubbed #ImVotingFor.

The aim of the campaign, launched Oct. 6, is to put the stakes of the 2020 election in human terms, Portal A says, and to get people to share their personal motivations for voting. #ImVotingFor lives on Instagram and Twitter, where upwards of 100 digital creators and traditional celebrities were asked by Portal A to share the hashtag with their tens of millions of followers, while concurrently encouraging them to nominate followers to participate as well.

The influencers — including political luminaries like Barack and Michelle Obama, as well as YouTube stars like Claudia Sulewski, Mr Kate (see below), and Mari Takahashi — each shared photos of a loved one or someone whom they deeply admired, and described why their vote in the upcoming election is dedicated to them. The influencers also encouraged voters to verify their registration status and formulate a voting plan, directing followers to do so at IWillVote.com.

Thus far, the campaign has generated 85,000 posts with the #ImVotingFor hashtag across both Instagram and Twitter, as well as 6.2 million engagements, and has reached 158 million total combined followers, Portal A says. On Twitter, the campaign became the No. 2 trend nationally, and has clinched 531 million total impressions thus far.

“In an election that will define the future of our democracy, our team is proud to be launching a social media campaign that will reach tens of millions of voters and put the stakes of November in the most human and personal terms,” Portal A co-founder Zach Blume — who formerly served as political campaign consultant before founding the firm — said in a statement.

When I think of explaining to Moon what a President is, what that role means to him, to us as a family and to the future of this planet, I’m hoping for a role model who I can confidently say, CARES about women, Black people, our planet, etc. all the issues @joeyzehr and I are passionate about as parents and people. That is why I will be voting for @joebiden and @kamalaharris . Visit iwillvote.com to check your voter registration status and make a plan to cast your vote. @zoeydeutch @daniellamonet @whitneyleighmorris join me in the #ImVotingFor challenge