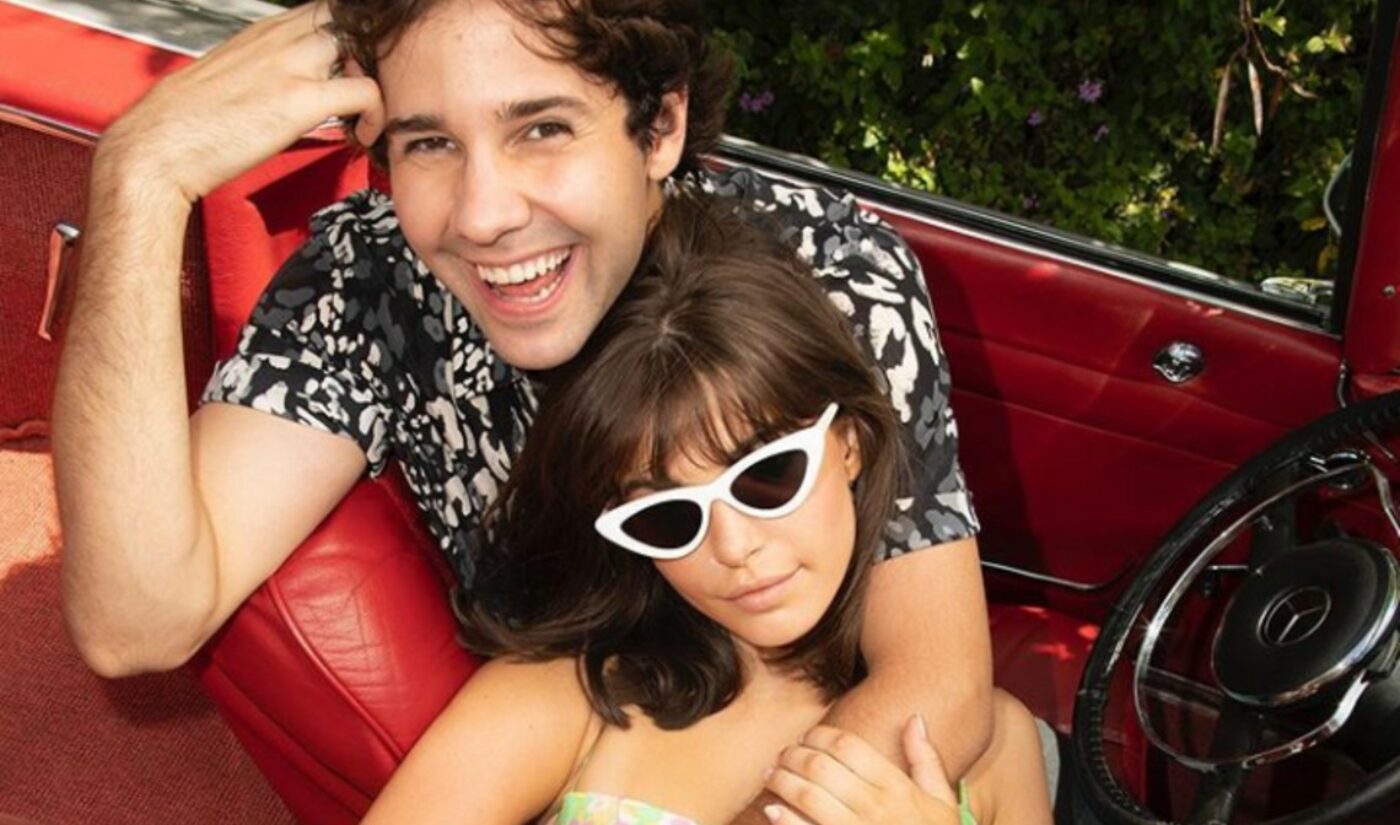 Like Tana Mongeau and the Dolan Twins before him, David Dobrik is the latest YouTube megastar to try his hand at scent entrepreneurship.

On Instagram, Dobrik announced the Oct. 2 release date for his new fragrance brand, David’s Perfume — per an Instagram account of the same name whose bio reads, ‘Elegant yet unexpected’. Dobrik also shared a campaign image for the forthcoming scent collection, which sees him snuggled up in a Mercedes convertible with the model and influencer Charlotte D’Alessio (above).

Two fragrances — each priced at $60 for 2 oz. — are now available on the David’s Perfume website, where fans can also sign up for more information, including future release events and products announcements. Both scents ship for free in the U.S. In a video for GQ, Dobrik shared that the venture comprises two scents at launch: Amber And Cashmere and Grapefruit And Sandalwood. Dobrik also said that the packaging for David’s Perfume was inspired by iPhone boxes.

David’s Perfume marks the first launch from a brand new scent startup dubbed Flower Shop Perfumes, which was founded by the entrepreneur Isaac Lekach. The boutique, direct-to-consumer perfume company was established in Sept. 2019. Lekach previously worked with Katy Perry and Adam Levine on their own signature scents at fragrance upstarts Gigantic Parfums and ID Perfumes. Prior to that, he worked on the Paris Hilton, Ed Hardy, Guess?, and Ocean Pacific fragrance licenses at beauty firm Parlux.

“David’s enthusiasm for life and magnetic personality makes him a perfect candidate for this product category,” Lekach said in a statement. “Working with him on designing the packaging and finding olfactive notes reflective of his spirit was a singular and entirely pleasurable experience — one his fans, and fans of fragrance, will appreciate.”

Even as his vlog remains on hiatus due to the coronavirus pandemic, Dobrik has continued to pursue myriad ventures this year, including a record-breaking Tesla giveaway to drive voter registrations, naming the first hires for his ever-evolving Dispo startup, launching a Twitch channel, and hosting a dodgeball competition series on the Discovery Channel.

Dobrik joins several fellow influencers who have launched fragrance brands to date, including Tana Mongeau, who says she sold out of the initial run of her Tana By Tana (priced at $48) in 76 minutes. Ethan and Grayson Dolan, meanwhile, are the co-founders of a fragrance brand call Wakeheart, which has released several scents as well as candles.

You can check out the campaign video for David’s Perfume right here: