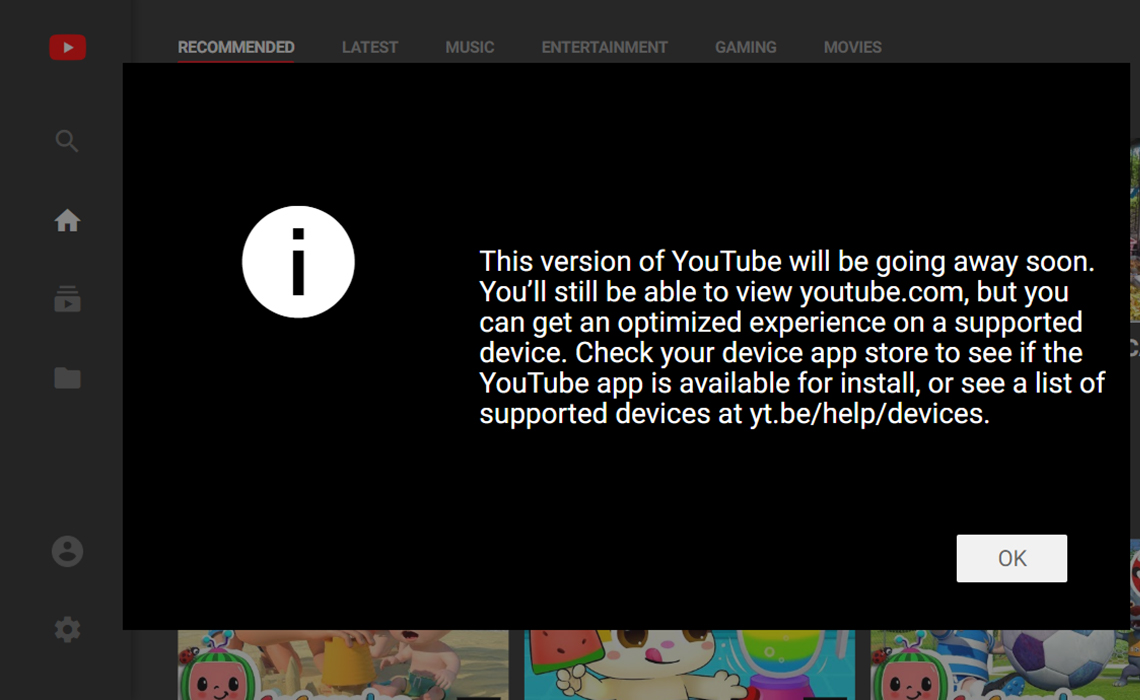 YouTube To Shutter Its TV-Optimized ‘Leanback’ Feature On Oct. 2

YouTube will shutter its nine-year-old browser interface early next month. The TV-optimized, minimalist Leanback feature was originally designed to mesh YouTube’s recommendation algorithm with traditional TV by serving up a never-ending stream of high-definition, autoplayed videos a viewer might be interested in, based on what they’d already watched/liked on its main site. So, that viewer could ostensibly “lean back” and watch programming — much like your average couchgoer might watch a night of sitcoms on a network.

A person familiar with the matter told Variety that YouTube’s main reason for axing Leanback is because it wasn’t meant to be used on “uncertified devices,” as those devices apparently can’t support all of Leanback’s features. A new notice on Leanback’s landing page also mentions devices, telling users, “This version of YouTube will be going away soon. You’ll still be able to view YouTube.com, but you can get an optimized experience on a supported device.”

As Variety points out, Leanback has been employed as a workaround by people who watch with devices made by companies that haven’t agreed to host YouTube’s official app. Folks have used Leanback to stream videos from browsers on computers, smart TVs (like Amazon’s Fire TV, before Amazon and YouTube made up in April), and other internet-connected devices where navigating YouTube’s main site might be tough, or the videos might show up as low-quality.

It’s tough not to see this as a move to put pressure on device makers that haven’t brought in YouTube’s official app. But whatever the reason for the shutdown, one thing is clear: On Oct. 2, YouTube will be taking its Leanback and going home.