Temperatures in New York broke triple digits at least two times this week. The humidity is bumping 80%. After walking a few blocks, enduring the most offensive heat wave to hit the City in the last decade, all you want is the soft, cooling kiss of your air conditioner, the relaxing comfort of your couch, and something good to watch on TV.

In these cases, when even a few mouse clicks seem like hard labor, internet television simply won’t do. The inherent interactive nature of the web demands too much of someone who just wants to lean back and be entertained. 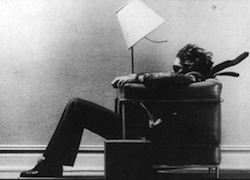 Enter YouTube Leanback. The just-launched feature from the world’s largest video-sharing site aims to mimic the east of the TV viewing experience while using the power of online social recommendations to deliver clip after clip of content you actually want to watch.

The navigation system for YouTube Leanback is stupid easy. You scroll to different videos in your feed by using the right and left arrow keys, the down arrow brings up different channel options, and the up arrow key reveals player controls and a search bar. Like a remote for traditional television, Leanback’s controls are relatively intuitive and have an extremely low learning curve. Play around with the feature for only a few minutes and you’ll already feel like a veteran user.

To say YouTube Leanback is game changing would be premature and somewhat of a hyperbole, but it certainly has the potential to be. Joseph Tartakoff notes how the recommendation engine doesn’t always make the best choices, though that will certainly improve in time. And a couple botched suggestions by no means renders the service unusable.

On the contrary, Leanback is the closest online approximation to channel surfing I’ve seen in years of frustrated, failed attempts. It’s an excellent discovery tool, perfect for those times when you know you want to be entertained, but you’re not quite sure what you want to watch. Sit back, relax, turn on the computer, tune in, and let us know what you think.