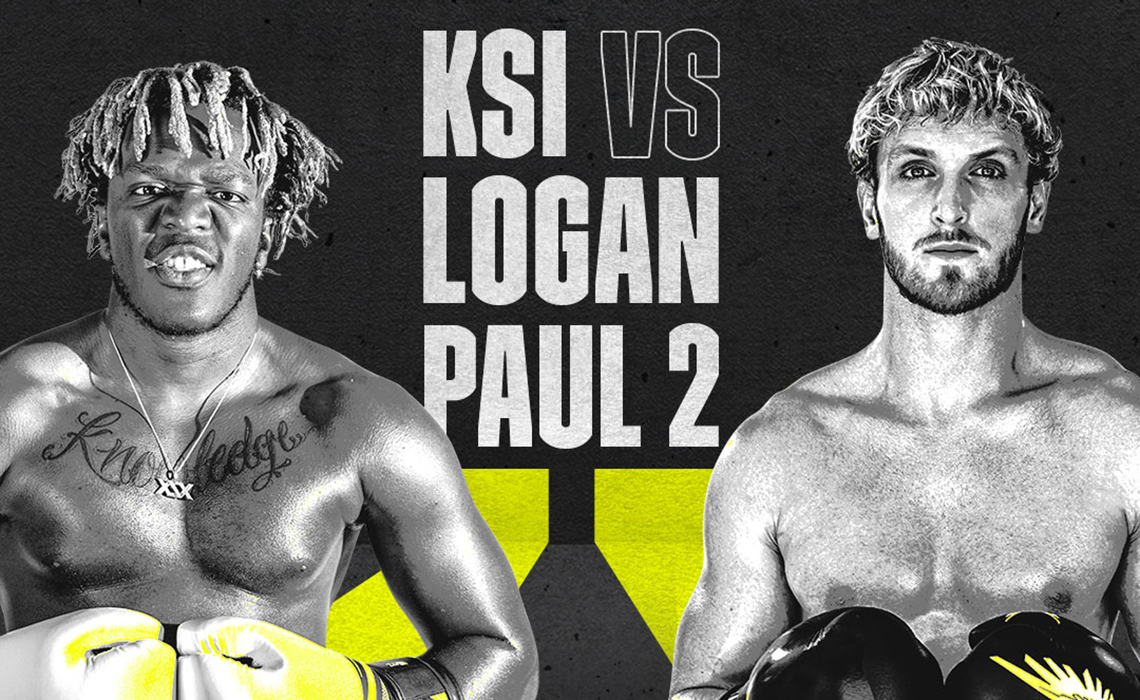 Weeks before Logan Paul and KSI stepped into the ring at Manchester Arena for their self-described “YouTube world boxing championship,” the duo had already begun teasing their audience about a potential rematch. And when their much-hyped three-minute match ended in a draw, it seemed perfectly poised to whip fans’ second-fight fervor into a frenzy.

Now, an official date has been announced. Paul and KSI (whose real name is Olajide Olatunji) will duke it out Saturday, Nov. 9, at Los Angeles’ Staples Center. The event will broadcast live exclusively on DAZN, which is “basically the Netflix of contact sports,” Paul said in a YouTube upload revealing details of the fight.

Paul’s video (below) also highlights one major change from last year’s fight to this year’s. The rematch will be set up as a pro match, meaning neither fighter will wear protective headgear, and both will be outfitted with lighter 10-ounce gloves — the standard glove used by amateur fighters who weigh less than 152 pounds. Last year, both boxed in 12-ounce gloves, used for fighters over 152 pounds.

“Finally, after over a year since our rematch, I get to enter the ring once again to fight Logan Paul,” Olatunji said in a statement. “If I’m being honest, I didn’t fight well at all in the first fight, and even then, I still managed to draw against him. This time I won’t make it so close.”

In his own statement, Paul (continuing the first round’s tradition of occasionally nastily dissing one another) said, “I’m excited to ruin JJ’s face and I want to thank DAZN for giving me the platform to do so. Last fight, KSI couldn’t beat me with only three months of training under my belt. For the past year, while JJ has been wasting his time trying to become a rapper, I’ve been training every single day.”

There’s one more change for this year’s fight, aside from locale and pro-level parameters, and that’s how fans will be tuning in to the match. Unlike last year’s fight, where (some) viewers paid between $8 and $10 to watch on YouTube pay-per-view, round two won’t be on the world’s largest video sharing site. Instead, folks who want to watch will have to subscribe to DAZN, which broadcasts major sporting events in partnership with organizations like the NFL and MLB to viewers in the U.S., Canada, Spain, Brazil, Italy, Austria, Germany, Switzerland, and Japan.

In the U.S., a month of DAZN costs $19.99, but it’s possible fans won’t have to pay that, as DAZN does offer a one-month, cancel-anytime trial. That means folks will apparently have a legitimate way to watch the fight without paying anything.

Tubefilter reached out to OP Talent, which manages Olatunji and produced last year’s fight, for more details about whether there will be an SVOD version of the fight available for purchase after its live broadcast, and how much tickets for live viewing at the Staples Center will cost. A representative said live ticket prices aren’t yet set, and added that OP is currently working on securing a platform to air the fight in the U.K.

Accessibility for viewers and pricing was a major concern for both YouTubers’ teams when it came to planning the rematch. Paul and Olatunji’s first match was heavily pirated, something Olatunji discussed earlier this year, and even people who paid to watch the fight on YouTube seemingly didn’t put that much money in the organizers’ pockets.

“I realized straight after the KSI vs Logan fight that we didn’t need to host the rematch on YouTube PPV,” Liam Chivers, founder and managing director of OP Talent, said in a statement. “Not just for the lack of promotional support and high fees, but because people will have to click a link to order the fight regardless of where it is hosted.”

Working out a deal to stream the match on DAZN took 10 months of negotiations, Chivers added. He said they settled on DAZN because its subscription model “was clearly the best option of all” and that, because of DAZN’s other sports offerings, “the value to fans isn’t matched anywhere else.”

As for who else fans can expect to see at the rematch, that’s another fuzzy detail. Last year’s large undercard featured a number of YouTubers, including both Paul and Olatunji’s younger brothers, who ended up drawing the event’s peak number of concurrent viewers.