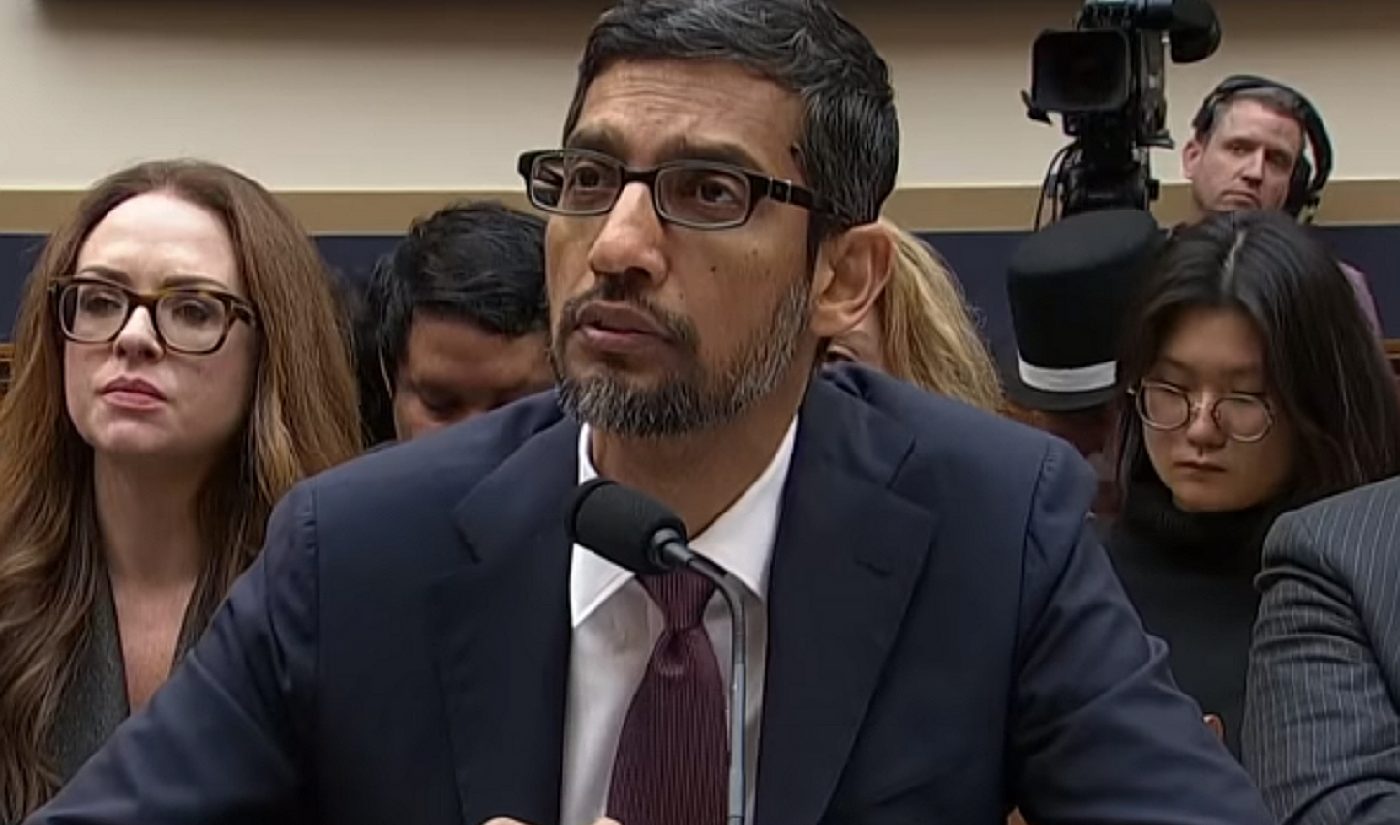 The spread of unchecked conspiracy theories on YouTube is once again in question — and this time, those questions are coming from the United States Congress.

Like other tech giants, Google is grappling with the challenges of keeping users’ data safe and keeping information on its platforms accurate. (Worth noting: Larry Page, CEO of Google’s owner Alphabet, was noticeably absent from Facebook and Twitter‘s Congressional hearings about similar issues in April and September, respectively.) Questions about potential search results bias stemmed from reports that searching for ‘idiot’ in Google Images pulls up images of Donald Trump. Pichai explained that what is pulled up in search results depends on more than 200 different ‘signals’ — “things like relevance, freshness, popularity, how other people are using it.”

During Pichai’s testimony, Democrat representative Jamie Raskin brought up YouTube, mentioning a recent Washington Post report alleging that YouTube is still “allowing racists, anti-Semites and proponents of other extremist views to use the platform as an online library for spreading their ideas” — despite multiple attempts on YouTube’s part to curb conspiracy content and content with misinformation.

Raskin’s questioning centered on rising conspiracy theory ‘Frazzledrip,’ which The Post reported is the subject of “dozens” of videos with millions of views circulating on YouTube. Frazzledrip claims Hillary Clinton and other (generally liberal) public figures murder young girls in devil-worshipping rituals and consume their flesh and blood. (Frazzledrip is related to the debunked #Pizzagate theory, which alleged Clinton et al were involved in a child sex ring operating out of the basement of a Washington, D.C., pizza parlor.)

“Is your basic position that this is something you want to try to do something about, but there’s just an avalanche of such material, and there’s nothing really to be done, so it should just be buyer beware when you go on YouTube?” Raskin asked, per The Verge.

“This is an area we acknowledge there’s more work to be done,” Pichai said. “We have to look at it on a video-by-video basis, and we have clearly stated policies, so we’d have to look at whether a specific video violates those policies.” He added, continuing to stay fairly nonspecific, that YouTube is “committed to doing better as we invest more in that area,” which isn’t really anything new — it echoes earlier sentiments from YouTube CEO Susan Wojcicki.

Wojcicki most recently addressed conspiracy content in October, saying that YouTube was overall in a “much, much better place” — though noting that the platform is still working on improving its algorithms, and is also focused on building out functions it introduced this year, like ‘Information Cues’ and its ‘Top News’ section, that offer users factual information from trusted sources.

She also explained that YouTube has no plans to enter into risky territory by trying to editorialize users’ content itself. “We don’t want to be in the business of saying: This is true, this is not true,” she said.