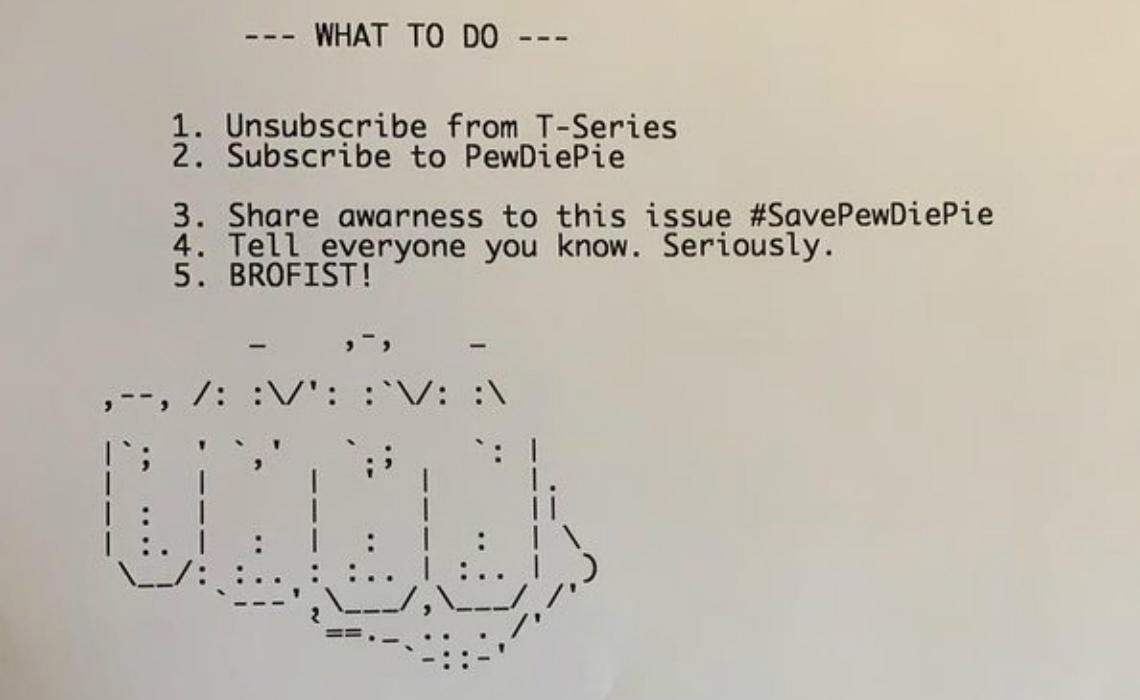 A number of printers in Canada and the U.K. are spitting out notices telling people to aid top YouTuber PewDiePie in his struggle to remain the most-subscribed-to creator on the platform.

Over the past few days, people have posted photos of the notice, many of them saying it popped out of their printers at work. The printout gives readers a brief rundown of the fact that Bollywood record label T-Series is coming ever closer to overtaking PewDiePie’s subscriber count. It then asks recipients to unsubscribe from T-Series, subscribe to PewDiePie (whose real name is Felix Kjellberg), and rally on social media with the hashtag #SavePewDiePie.

The hacker claiming responsibility for the army of pro-PewDiePie printers calls themself ‘@HackerGiraffe‘ on Twitter. “Spread the word with your friends about printers and printer security!” they tweeted. “This is actually a scary matter. Will tweet everything about this entire #PewDiePie hack later to explain to everyone exactly what went down. Also @PewDiePie please notice me.”

My work printer was hacked today! This message printed out on our cheques… 🤣✊ @pewdiepie pic.twitter.com/UW07hx7Tpv

@pewdiepie I work in IT around Brighton and our Printers are being hacked….is this your propaganda? pic.twitter.com/xIRCGEQoNB

@grandayy @DolanDark @pewdiepie ok so basically a printer at a friend’s workplace got hacked. not complaining pic.twitter.com/DcNGrKlbXj

So this just randomly printed on one of our work printers. I think @pewdiepie has hacked our systems. pic.twitter.com/wSG9cprJ4s

@pewdiepie this just came through the ticket printer for the police station next door #savepewdiepie pic.twitter.com/7cGX3VmUIt

They also explained that the hack was surprisingly easy to pull off. “Basically I used a website called https://shodan.io and did a search for devices with port 9100 open. I downloaded that list,” @HackerGiraffe said. “After that, I used a tool I found called Pret (find it on GitHub) which allowed me to connect to these printers, print my PDF, change the display to hacked, and then quit.”

While the stunt obviously touts pro-PewDiePie messaging, @HackerGiraffe also intended to raise awareness about the dangers of printer hacking. “Honestly, if I don’t do this, no one will know how serious this is.”

Kjellberg has not yet commented on the hack.