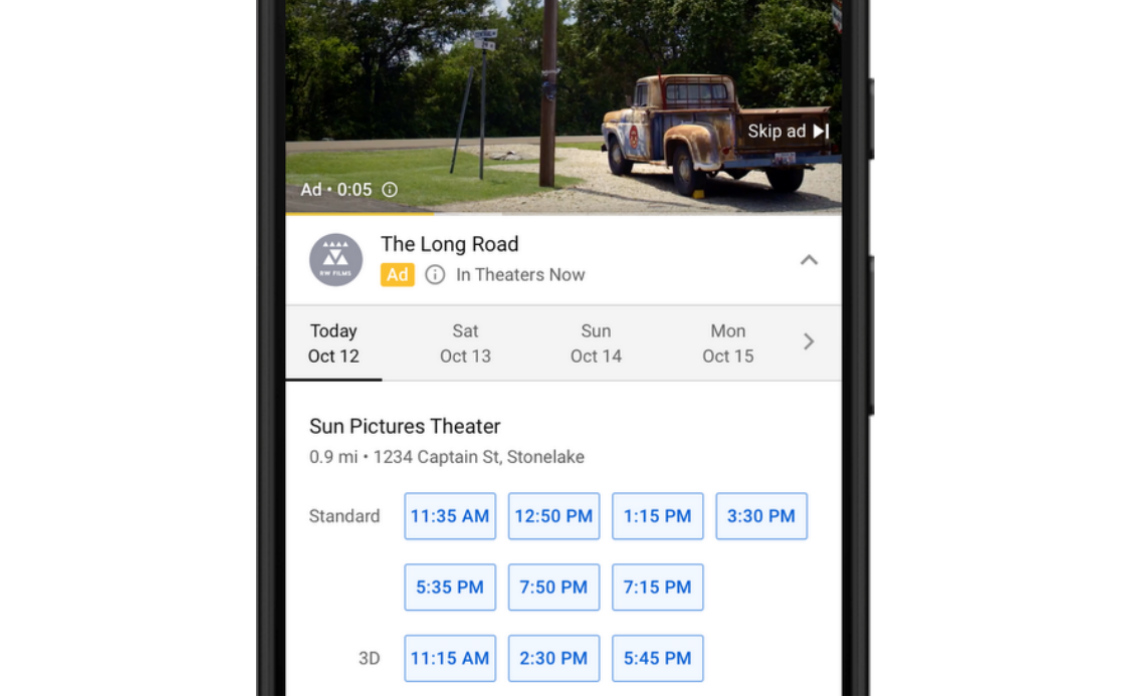 YouTube’s advertising engine is about to get even smarter. Google, YouTube’s parent company, announced at Advertising Week today that it will be introducing sale-closing tools called “ad extensions for video” that, in some cases, could allow users to purchase third-party goods like movie tickets without ever having to leave YouTube.

The company also said these ads will be targeted based on users’ viewing habits and searches on the site. So, if someone searches for or watches trailers for the new Venom film, they may see a shelf of local showtimes below the videos they watch. Other examples include a viewer searching for an app review and being served a link to download that app, or a viewer searching for vacation vlogs and seeing a shelf with flight and hotel information.

These extensions are adding to a small stable of other ad-improving extensions currently being beta tested by YouTube, including ones that allow people to search for the location of a business and submit their contact details to companies within an in-stream ad, AdWeek reports.

Vishal Sharma, vice president of product management for YouTube Ads, explained in a Google blog post that tools like these are meant to push viewers to “lower-funnel actions” — or, actions that end in a sale for advertisers — rather than simply putting those advertisers in viewers’ minds.

Tara Walpert Levy, YouTube’s vice president of agency and brand solutions, expanded on that, telling AdWeek, “I think our clients have always wanted to achieve both their brand goals and performance goals simultaneously. At the end of the day, they have one budget and one customer that’s the same person who’s not splitting their head into ‘You know what? I [would] like to be made aware,’ or, ‘I would like to buy something today.’”

She added that further marrying Google’s search capabilities into YouTube is logical because, in audience studies, 60% of people Googled a product, then looked it up on YouTube before buying it. The number of people doing that has doubled year over year, Walpert Levy said, which means “YouTube has an interesting straddle between entertainment and information, which is pretty unique in the marketplace.”

YouTube is also bringing in marketing research company IRI to beef up campaign performance metrics for advertisers. With IRI, YouTube will be able to give brands a number of lifted users, or people influenced by an ad, as well as the specific cost per person it took to snag those users — vital numbers in a market where billions of advertising dollars are spent each year.