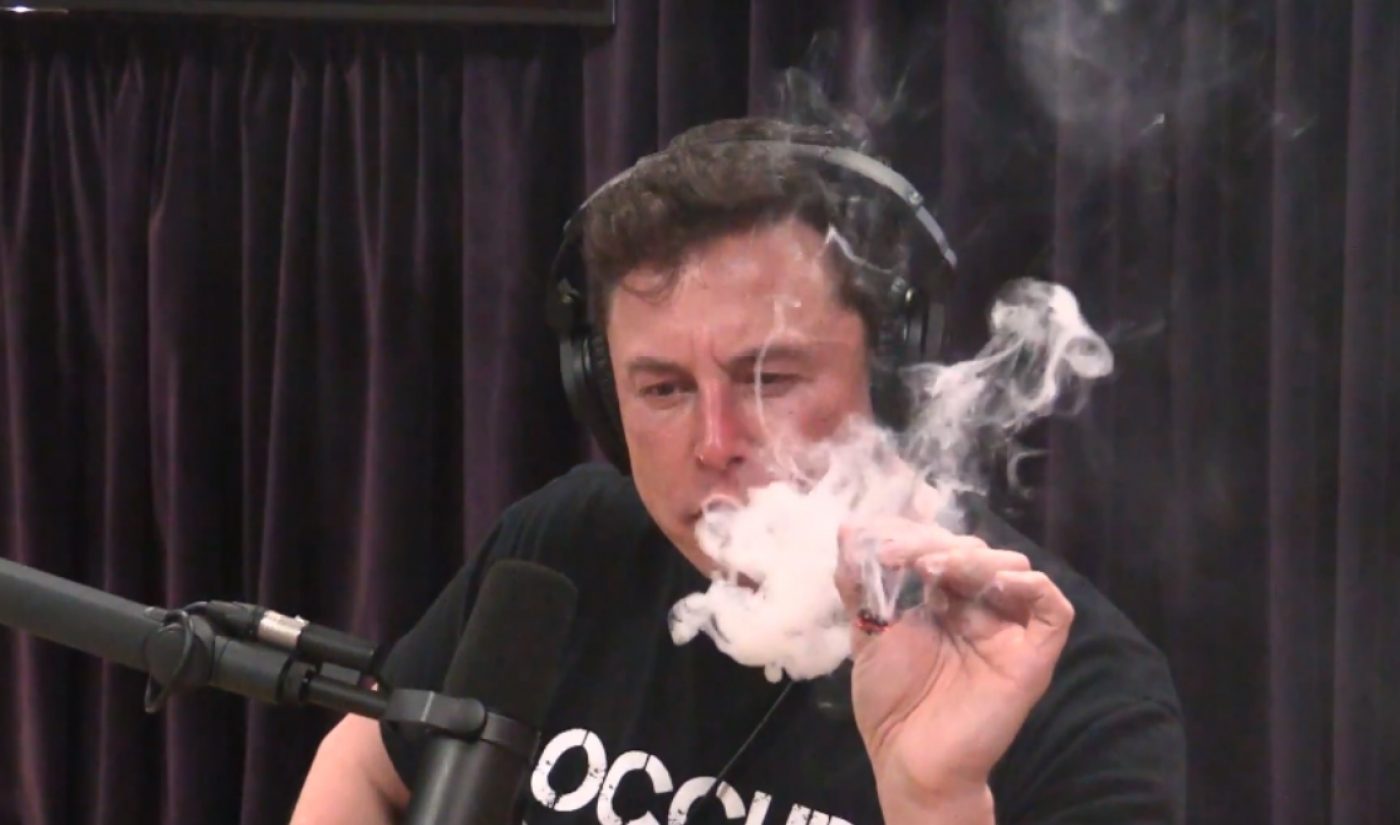 Tesla’s stock dropped significantly and two senior executives parted ways with the company after its founder and CEO Elon Musk smoked marijuana on The Joe Rogan Experience. a podcast that also counts a substantial YouTube following. Host Joe Rogan shared a tobacco-and-marijuana joint with Musk during their livestreamed three-hour interview, during which they discussed — among other things — social media and the future of artificial intelligence.

“You probably can’t because stockholders, right?” Rogan said, after Musk asked what he was smoking.

“I mean, it’s legal, right?” Musk replied. (Yes, it is, as The Joe Rogan Experience is filmed in California.)

While Tesla may have dropped in response to the episode, The Joe Rogan Experience is booming. The crystallized video of the livestreamed interview has been trending all day, and at time of posting is at No. 6 on YouTube’s trending page, with more than two million views in 15 hours.

Also, per internal Tubefilter data, Rogan’s YouTube channel, PowerfulJRE, has gained nearly 30,000 subscribers today. He currently has just north of 3.3 million. Rogan regularly gains new subscribers in the thousands per day, but the number pouring in right now is roughly 250% larger than his average daily gain.

As for viewership, The Joe Rogan Experience videos always garner hundreds of thousands of views, but those viewcounts can vary dramatically when Rogan hosts a notable guest. A recent ‘Best of the Week’ episode with no guest netted 156,000 views, while an interview Rogan did two weeks ago with Neil deGrasse Tyson has 3.2 million.

Musk has proven himself good for YouTubers’ viewership and subscriber counts in the past. Galileo Russell, creator of the YouTube channel HyperChange TV, was called upon by Musk during Tesla’s now-infamous first-quarter shareholder call this past May. After Russell (who is a Tesla shareholder) questioned Musk, HyperChange TV saw a spike of nearly 10,000 subscribers.

And just this past month, while embroiled in investigations resulting from a tweet saying he’d take Tesla private once shares reached $420, Musk brought YouTuber (and Tesla owner) Marques Brownlee to Tesla’s Fremont, Calif., headquarters factory for a lighthearted chat about potential future Tesla products. Since the interview on Aug. 20, Brownlee, aka ‘MKBHD,’ has gained more than 120,000 subscribers.