Hulu delivered over one billion ads in October. That was headline news yesterday after comScore released the latest incarnation of its monthly U.S. Online Video Rankings. But what else can we take away from the internet marketing research company’s online video charts? With a calculator and eighth grade algebra, you can figure out a handful of great statistics.

How about how often viewers see video ads?

That may seem like a lot of advertising, but the number isn’t all that surprising. Your regular, 22-minute television sitcom schedules an ad break roughly once every six minutes. Most Hulu users visit Hulu to watch on-demand TV. The timing of commercial breaks inserted into television shows stays constant, regardless of the viewing platform. So, it makes sense for you watch an ad on Hulu about as often as you see a commercial break on TV.

What makes less sense is how often you view a video ad on YouTube.

The average YouTube viewer watched 271.6 minutes of online video in October. During that time, YouTube delivered 170 million ads at a frequency of 4.1 ads per viewer. Take those stats and you find your everyday consumer of YouTube watches one video ad every 66 minutes and 14 seconds. That’s not a lot of advertising! 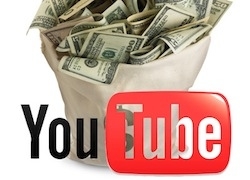 The advertising frequency gap between Hulu and YouTube has a lot to do with a financial problem YouTube’s struggled with since its inception: amateur content.

Unless you’re an uploader who is part of YouTube’s Partner Program, ads aren’t going to appear within your videos. The vast majority of the 35 hours of content uploaded to YouTube every minute comes in the form of homemade movies shot by amateurs, against which YouTube can’t advertise. To be the biggest online video site in the world means having a helluva lot of inventory that doesn’t make you money.

Hulu’s the exact opposite. All of its content comes from premium providers and is advertiser friendly. The same brands comfortable advertising on broadcast NBC also feel okay throwing ad dollars Hulu’s way.

Long-form videos also comprise the majority of Hulu’s inventory and present more advertising opportunities. People who watch installments of The Office on Hulu are going to tune in until they’re finished, and suffer through the two or three commercial breaks it takes to get to the end of an episode. An episode of The Guild lasts nine minutes on YouTube, and you only have to watch one commercial when it starts.

Looking at these numbers it’s no surprise Hulu’s been able to turn a profit within its first year of operations while YouTube’s still not quite in the black. I realize there are many idiosyncrasies involved with running a multi-billion dollar media corporation, but if Eric Schmidt and company can focus on increasing the frequency that YouTube viewers watch video ads, it may be the quickest way to help the company’s bottom line.