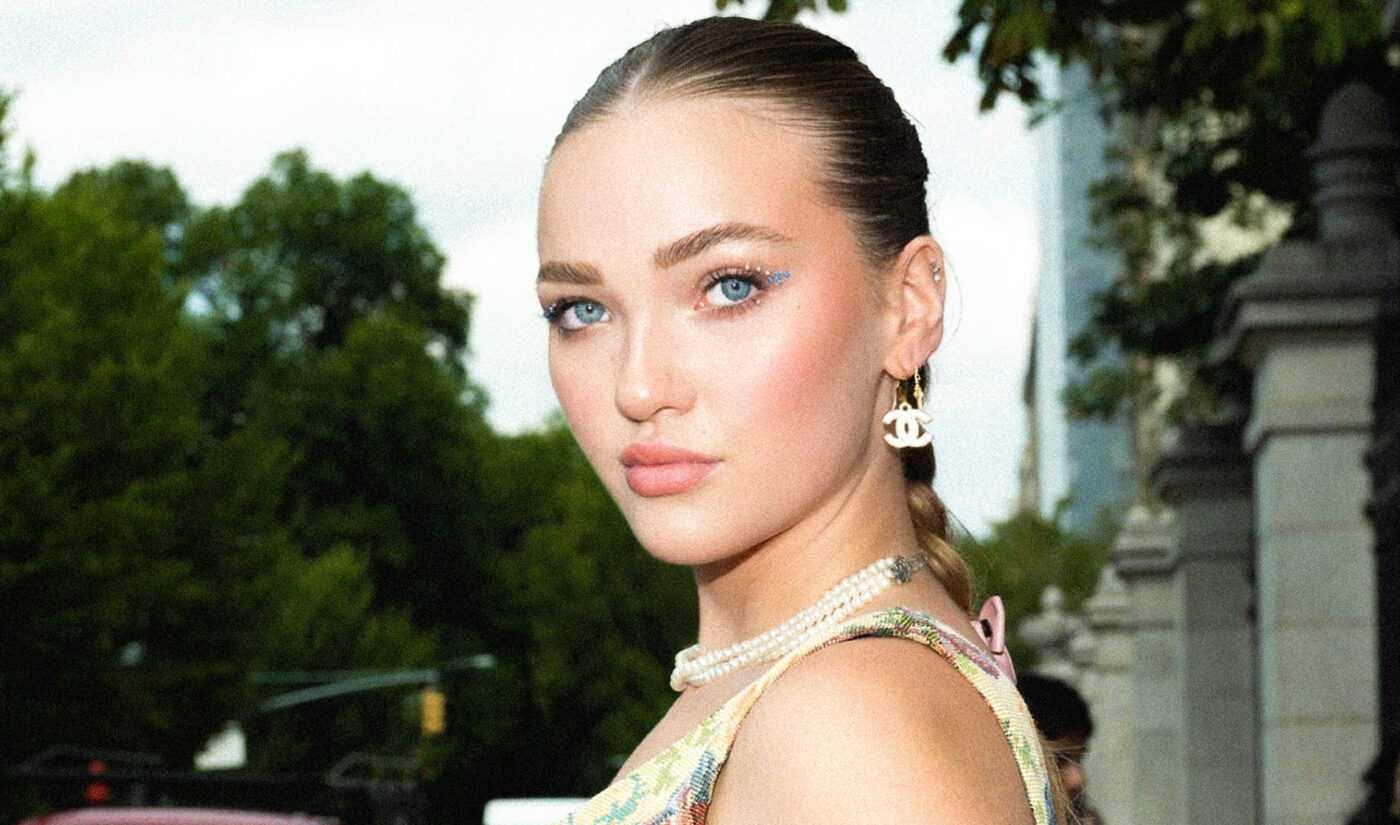 For Alyssa McKay, the rich girl started as a wish.

McKay, who’s 22, grew up a foster kid. Things were tough, money was tight, and life overall was not incredibly glamorous.

McKay found comfort in iconic late 90s and early 2000s movies like Clueless and Legally Blonde. She idolized Cher Horowitz and Elle Woods–witty, popular, self-confident women with bougie backgrounds and attitudes to match. Cher and Elle made things happen. McKay wanted to do that, too.

Already in love with acting, McKay channeled her Cher-and-Elle energy into creating “the rich girl”–an alter-ego that serves both as wish fulfillment and character practice. “She has everything I didn’t, growing up,” McKay says. “She’s things that I aspired to be, things I wanted to have.”

When McKay’s in character as the rich girl, she’s a ditzy blonde with a mean talent for diss tracks. Out of character, she’s hoping her rich girl videos (which have brought her one million subscribers on YouTube and nearly 10 million followers on TikTok) will serve as a showcase for her acting talent, and help bring her roles on the big screen.

Tubefilter: How does it feel to be approaching a million subscribers?

Alyssa McKay: I’m really excited. It’s been like a dream of mine to be on YouTube since I was really little. I honestly never thought I’d hit a million when I was younger. So it’s really exciting for me.

Tubefilter: How did you end up on YouTube? What made you start a channel?

AM: I started my YouTube channel quite a bit ago. I actually was posting YouTube videos when I was really, really, really young. I was like 12 years old, putting together little music videos and stuff. That kind of transcended into my young adult life when I started doing social media full-time. Of course I had to continue with YouTube, but YouTube was actually the first platform I ever posted on.

Tubefilter: How did it become a full-time thing for you? Was there a trigger point where you were like, “Okay, this is what I’m gonna do”? When did you start gaining enough traction that you knew that this was gonna be a career?

AM: Probably two summers ago. I would say when I started doing a lot of my “rich girl” content, as well as “rich girl raps” is when my career in social media started to take off. I was actually working at a frozen yogurt shop, and I got to quit that job in August of 2019.

Tubefilter: Obviously, as you said, you’ve been posting on YouTube for a long time, but what drew you to posting on Shorts and did Shorts change things for you?

AM: A lot! The content that I was creating was specifically for short-form. So when the Shorts beta launched, Brian [Mandler, of The Network Effect] put me on it immediately and I started making content there. I really enjoy it. I feel like now I’ve gravitated more toward short-form content and producing more of that than long-form.

I think that’s what drew me to Shorts. I’ve always loved YouTube and I love the community aspect of YouTube, and to be able to post my short-form content onto Shorts—whereas before it was more so exclusively long-form—was really exciting.

AM: Yeah, absolutely. I think that short-form’s awesome. It allows for a lot of creativity and a lot of different styles of content that didn’t really exist before. Especially now, I feel like with people’s attention spans getting shorter and shorter, I think that short-form content is truly the way to go. I mean, for me now, I consider…if I’m watching a long-form YouTube video, I feel like three to five minutes is kind of what I would consider long-form now. Whereas, when I was growing up watching YouTube, a lot of long-form videos were between 10 and 20 minute minutes long.

Tubefilter: If somebody’s reading this and has never seen your content, what can people expect when they tune in to one of your videos?

AM: The Rich Girl—it’s a character I do. Then there’s the raps I do from the perspective of the Rich Girl, which I feel is very unique content.

Tubefilter: How did you come up with her?

AM: I drew a lot of inspiration from some of my favorite movies—Clueless, focusing on the main character Cher, and then Legally Blonde with Elle Woods. I really related to those characters growing up. I was actually a foster kid. And so I kind of used the Rich Girl as my alter-ego, in a way, because she has everything I didn’t, growing up. She’s things that I aspired to be, things I wanted to have.

I think it’s very fun for me too, because not only am I acting in the videos, but I also write out my script for the videos. I’m the one putting shots together and editing it and doing all that stuff. It really gives me a lot of experience with more production because I’m primarily an actor. So I get to mess around with scriptwriting and filming and editing, which is really fun.

Tubefilter: Can you walk us through your process when it comes to creating a video? How much time goes into the average video for you?

AM: It really depends. Like, with the raps, I have to write them down. Obviously they have to rhyme. I have to find a beat. I would say it takes at least an hour. Sometimes it could take a little bit longer depending on how much the creativity is coming to me. On average I’d say a little bit over an hour. I have to sit down and first thing’s first, find the beat, then write all the lyrics. So it adds a little bit of time to my content.

Tubefilter: How has your content evolved over the past couple of years, since you buckled down on short-form?

AM: When I first started off with the Rich Girl is really when I kind of found the content that was going to be specific to me. Because before then I felt like I didn’t really have a niche. The Rich Girl kinda started off as just POVs, and also she was moreso of a mean girl than she was like this ditzy girl. Now her character is evolved into being more of a likable, lovable character. More of an airhead versus a mean girl.

Then I went from doing POVs…I still do the POVs, but that kind of expanded into her doing diss tracks and her doing raps from her perspective, like her first day of high school and stuff like that. It’s definitely evolved, is definitely changing. And even now, me and my management team at The Network Effect, we have calls every single week where we strategize our content plan, and we’re always talking about the Rich Girl and how we can evolve her even more.

Tubefilter: How has working with your management team helped grow your presence?

AM: They literally helped me with every single aspect of my career and my life. There’s Brian Mandler, and he helps me with all the numbers. He’s the one that put me into the YouTube Shorts beta, he’s the one where we’re always first for everything. At least that’s what we try to be. So when Shorts first came out, of course we were like, “Alyssa needs to be on that.” They’re good because they have their relationships with all the different platforms and that helps us be early on their new betas for Shorts and stuff. He also helps me with the number side of things.

Then Brian Nelson is kind of my day-to-day contact. He helps me manage my content every single day and what I’m going to be doing. Nelson’s more of the talent management side. They just help me with everything on my day-to-day.

Tubefilter: I know you’ve been in a few projects as an actress. Is that something you want to keep pursuing?

AM: Yes. Acting is my passion. I’ve been acting since before I was on social media, so it’s definitely something I want to pursue. That’s why I try and center a lot of my content toward the Rich Girl, because it’s acting. I get to produce, write, direct, and it’s really fun.

Tubefilter: What else do you get up to outside YouTube and acting? Do you have any hobbies?

AM: Well, I have a dog. I spend a lot of time with my dog. Her name’s Ayla, she’s a miniature dachshund. She’s really cute.

I just moved from Oregon. I was born and raised in Portland, Oregon, and I just moved across the country, me and my puppy, we moved to New Jersey, like an hour away from New York City. I’ve always wanted to live in New York City, but I chose New Jersey so I can get a backyard for my dog and stuff. It’s amazing. I’m having the best time ever. So my hobbies right now consist of unpacking my home and exploring my new space.

Tubefilter: Are there any future plans you can talk about? Any goals?

AM: My biggest goal right now is to hit a million on YouTube, which we’re quickly approaching. I’m very excited about that. So that’s in the near future. That’s what I’m really focusing on is just pushing YouTube very heavily.