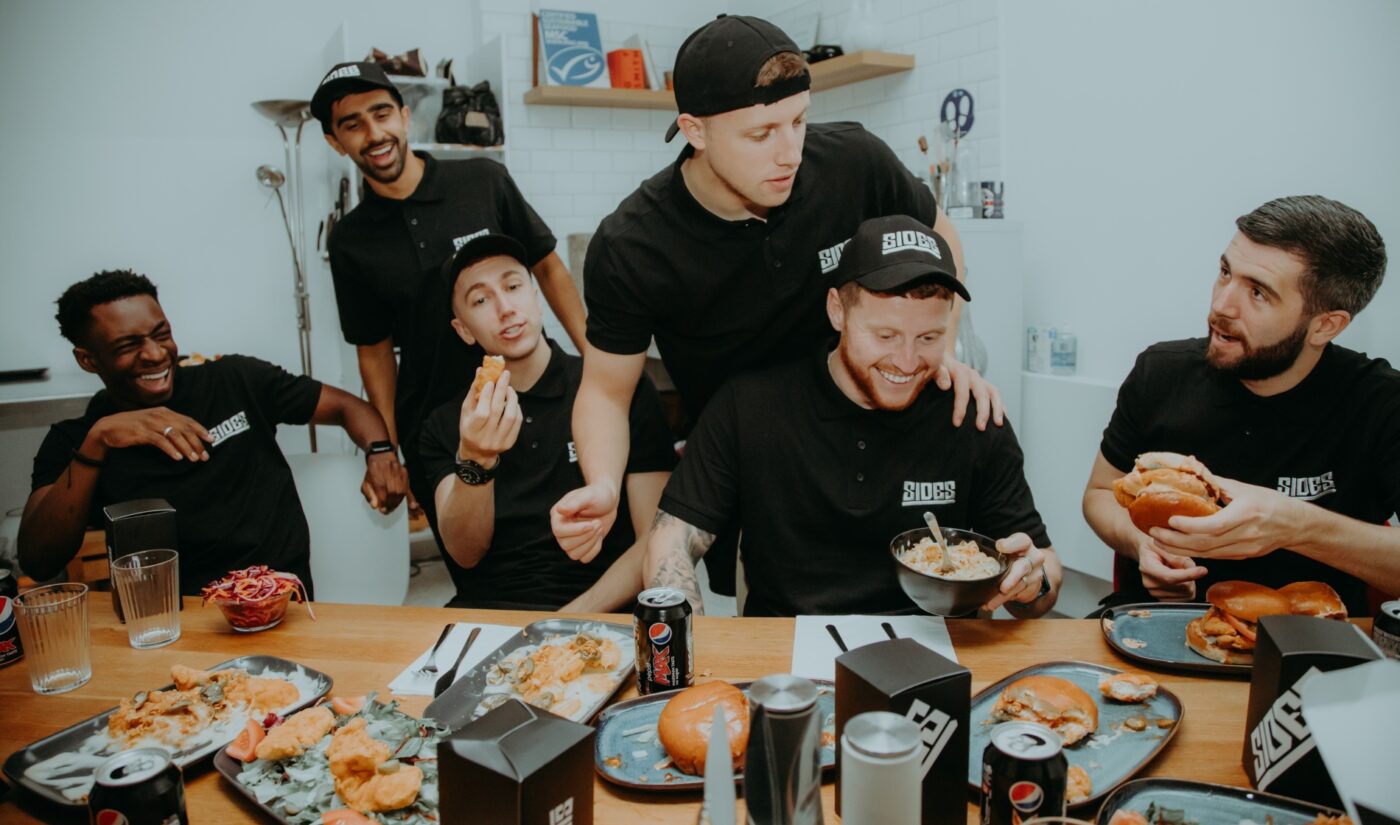 Jordan Schwarzenberger first met the Sidemen at one of their charity soccer matches. Immediately, he was taken in by the “One Direction-level madness” that surrounded the supergroup. Schwarzenberger had previously worked with high-profile clients in the music industry, but in this septet of YouTube-famous Brits he saw unparalleled potential.

“They have the best shot at anything they want to do,” Schwarzenberger told Tubefilter. To play his part in their growth, he signed on as the manager of the Sidemen. He teamed with Sam Ewins and Aaron O’Neill, and they launched Arcade Media in 2021.

The forward-thinking management firm is helping the Sidemen launch the next phase of their career. Once known for their boyish whims, these seven creators — KSI, Miniminter, Zerkaa, TBJZL, Behzinga, Vikkstar123, and Wroetoshaw — are maturing. They are now using their shared star status to age up their content, launch new products, and reimagine corporate structure. Their company might just be future of creator-facing businesses — and it’s definitely selling a lot of fried chicken.

These soccer-loving lads have gone from boys to men

The Sidemen first came together in 2013. Six members joined the group then, and Wroetoshaw made it seven a year later.

From the group’s early days, its content had the tone of an after-school hang. The boys played video games and soccer against one another. Roughhousing occasionally ensued. Millions of subscribers flocked to the Sidemen YouTube channel. The videos there were full of masculine energy, with an audience to match. Currently, about 81% of the Sidemen’s fans are male.

In those days, the Sidemen were a swaggering bunch. They mostly kept things playful, but they hadn’t yet grown into the adults they are today. KSI (real name Olajide Olatunji), who is the most recognizable member of the Sidemen internationally, was a controversial figure before joining the group.

Nine years later, the Sidemen have new priorities. Some of them have gotten married and started families. They began to start thinking about how they can “leave a legacy that’s much bigger than the Sidemen,” as Schwarzenberger put it.

YouTube has matured, too. These days, there’s a multi-billion-dollar creator economy — nobody was really using that term when the Sidemen first started on YouTube. To get a piece of that pie, the Sidemen transformed their channel into a full-fledged business, complete with org charts, job listings, and boutique management courtesy of Arcade Media.

“They’re trying to do things that are less immature,” Schwarzenberger told Tubefilter. “Everything they want to do is of the best quality.” He said that the group strives to “appreciate excellence,” and that mission informs their work as entrepreneurs. They want to be “CEOs rather than boys in their bedroom making videos.” Their ultimate goal, Schwarzenberger says, is to build “Disney for Gen Z born from YouTube.”

Vikkstar123, whose real name is Vikram Singh Barn, sees a clear progression in his approach to creation. “Having a long career on YouTube has enabled me to massively grow as a person and has given me so many incredible opportunities,” he wrote in an email to Tubefilter. “I think we’ve all evolved so much and are learning every day, especially with these businesses launching in industries I’d never thought I’d be involved in.”

Bringing MrBeast across the pond

The industries Barn speaks of include food, drink, and fashion. Across a 90-day span, the Sidemen launched three different brands: A fried chicken concept called Sides, an alcoholic beverage venture named XIX Vodka, and Side+, a membership club for the group’s most devoted fans.

The results have been exceptional. Three XIX Vodka “drops” all resulted in sellouts, and Sides now has more than 300,000 followers on Instagram. The Sidemen audience has ballooned, and the group now reaches more than 33 million followers across YouTube, Instagram, TikTok, and Facebook.

These ventures have been made possible by the passionate organizational culture the group has implemented. Schwarzenberger described the Sidemen business model as “corporate gold without the corporate bad stuff.” Instead of combing through CVs and analyzing college degrees, the Sidemen team likes to hire people who are familiar with their brand and committed to its growth.

Schwarzenberger noted that Norway is one of the top Sidemen markets, and many of the young company’s employees are Scandinavian. “Fan first is a really good approach because then you get the passion,” he told Tubefilter. “These people don’t just care about the job, they care about the Sidemen brand.”

That strategy has also been utilized by a creator who operates thousands of miles away from London, in Greenville, North Carolina. The Sidemen and Schwarzenberger are big fans of Jimmy “MrBeast” Donaldson and his partners at Night Media. “We’re trying to execute our brands at the highest level in the U.K. and Europe, and as they’ve achieved that in the U.S.,” Barn said. “It’s amazing to learn from them and their approach.”

The Sidemen emulate MrBeast in multiple ways. They use their identity as creators to inform their corporate decisions, but they also take cues from his content, too. Barn told Tubefilter that “getting older has made us more attracted to bigger ideas,” and he and his mates now produce videos with big budgets, massive scale, and large, round-number monetary prizes — just like MrBeast. Barn cited a recent escape room video — “our most expensive to date” — as a good example of a modern Sidemen release.

These over-the-top productions have been made possible by the team the Sidemen have put together and their creative evolution. “We couldn’t dream about making content at this level a few years back,” Barn said, “so to be able do this now, at this huge scale, is an immense privilege.”

For creators who are active on YouTube, looking up to MrBeast is nothing special. But the Sidemen are an interesting case, because they must implement their entrepreneurial ideas in a non-American culture.

“In the States, the culture is different,” Schwarzenberger said. “It’s a different landscape for consumerism and products and brands.” The Sidemen manager described America as a “culture of entrepreneurs” that has bred a strong influencer market. Meanwhile, the U.K. is a “more modest culture.” For the Sidemen, breaking out of the “U.K. bubble” to become “international creators at the top stage” presents challenges.

To move beyond the restrictions presented by their home culture, the Sidemen position their products as credible market ventures, not “merch.” Sides, which includes vegan and halal options, had a staggered rollout that first brought it to the U.K. and U.A.E. Naturally, the septet released videos to promote their new chicken spot.

Moments like these test the maturity of the Sidemen. Launching an international food brand requires them to engage with audiences who aren’t as devoted as their typical YouTube subscribers. “When you create content you’re 100% able to manage the final product right,” Barn said, “but when launching businesses with complicated products like food and using third parties and franchise partners, it takes a second to get used to that lack of control.”

Though expansion into some global markets is tricky, viewers in the U.S. seem to be digging the Sidemen’s business-savvy approach to their content. Right now, about 30% of their viewers come from America, which is about the same share as the group’s U.K. audience. In the near future, those Stateside fans will be able to order Sides, too.

Coming to America is great, but Schwarzenberger admitted that the Sidemen must not lose track of who they are: A group of fun-loving boys from Britain. Though their style, personalities, and approach to content have changed dramatically over the nine years they’ve spent together, they still display the same passion and camaraderie that made them YouTube stars in the first place. Only now, they have a whole group of coworkers who love the Sidemen just as much as they do.