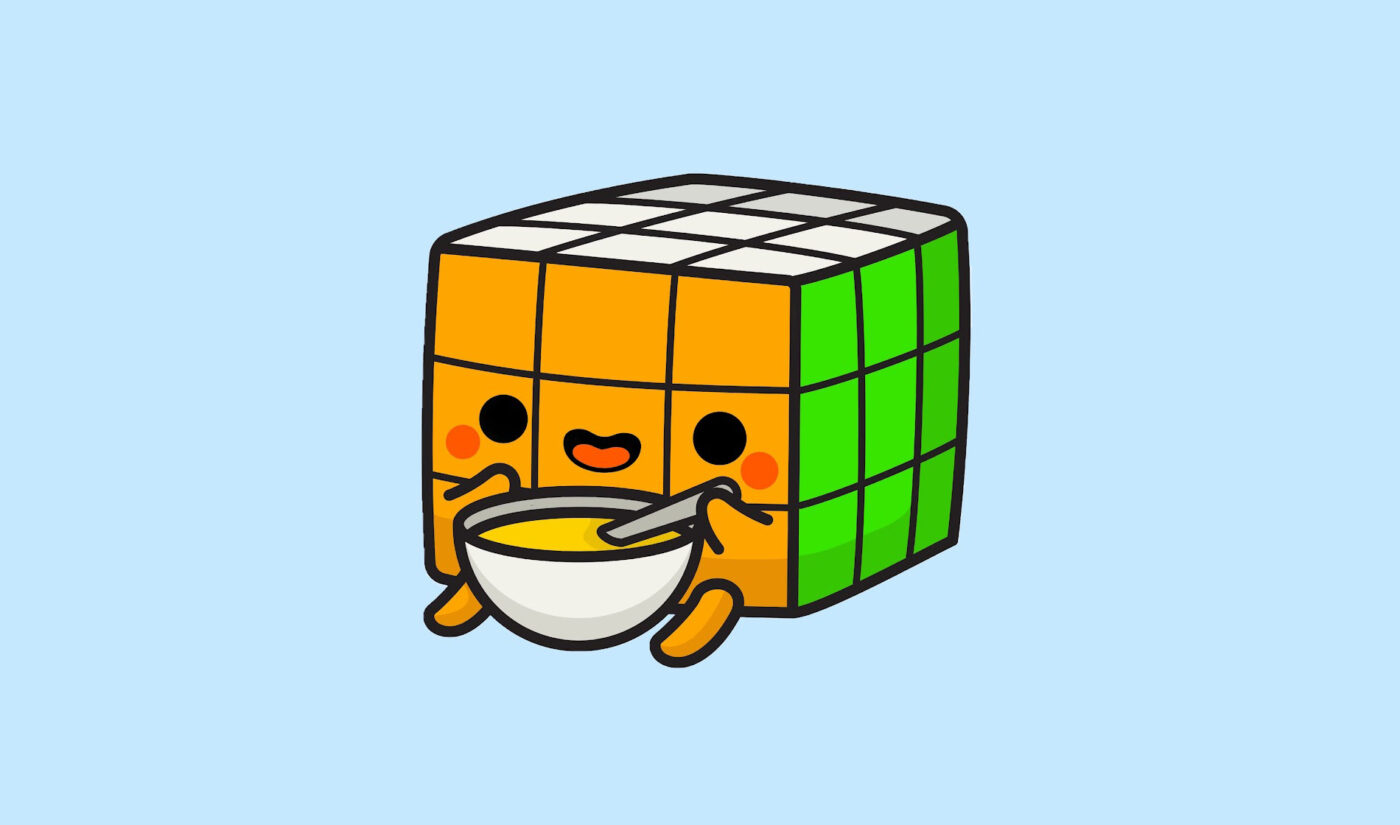 SoupTimmy is serious about Rubik’s Cubes.

But at first, he was like most of us: He got a cube when he was a kid, tried a few times to solve it, and when he couldn’t, he set it aside and forgot about it.

The first time he figured it out, it took him three days. Then two days. Eventually he drilled down into just a couple of minutes. Now, years later, his record for the traditional 3×3 Rubik’s Cube is a wild 8.79 seconds.

If you tune into his YouTube channel, you’ll see his solving speed for yourself–but solving isn’t all he does with Rubik’s Cubes. He also makes art with them by arranging their faces in a specific order to show specific colors. One of his top pieces, a portrait of Tanjiro from the anime Demon Slayer, involved laying out 1,200 individual cubes. And in one of his most recent pieces, he used those same 1,200 cubes to create a memorial to late Minecraft YouTuber Technoblade. That video has more than 30 million views to date.

SoupTimmy (aka Timothy Huynh) also uses his channel to explore other combination puzzles, like this $1,000 21×21 cube, this glowing, ultra hard mode “AfterLife” cube (where the cube’s colors don’t show up until they’re put in the correct place), and this master pyraminx.

Tubefilter: Who are you, where are you from, and how did you get into Rubik’s Cubes?

Timothy Huynh: So my name is Timothy Huynh, and I’m from Tampa, Florida. I started Rubik’s Cubing because when I was nine years old. I had a Rubik’s Cube, but never got the chance to solve it. I wasn’t dedicated enough. Five years later, when I was in 10th grade, probably 15 years old, I picked it up again and forced myself to learn it during a summer.

Tubefilter: How did it escalate from there? Did you aim for shorter times?

TH: Yeah, only 30. And then, so this is around 2019, I had 30. Then when the pandemic hit, it was around October, a few months after everyone was on lockdown, I decided to buy 1,200, because I wanted to make some bigger art. There wasn’t much to do, so I’m like, let me get a new skill. And yeah, that’s how it happened.

Then I started posting. My first picture was Kobe Bryant, because it was trending at the time and it was easy to make. I took like 13 hours unboxing the cubes and placing them on the floor before I got my own frames.

Tubefilter: Did you do art as a kid?

TH: Oh yes, I did art. Yeah. I did art, but not that type of art at all. I built with, I liked playing with LEGOs. So LEGOs was also the inspiration for combining my two hobbies.

Tubefilter: What else are you up to outside of Rubik’s Cubing? Is content creation your full-time job? Are you in school?

TH: Content creation is my full-time job. I do other, like, I showcase weird puzzles, like 21×21. I buy very expensive puzzles and I think that’s what sets me apart from other Rubik’s Cubers. I’m willing to put the money down and get like crazy puzzles and stuff.

Tubefilter: How much have you invested? Like you mentioned buying 1,200 at once…

TH: Yeah. I’ve sold some as well. I made one for David Dobrik. He flew me out because he saw my art and he’d bought a new house, so he wanted a picture of Buzz Lightyear. So I made him one.

Tubefilter: Walk me through the average day for you nowadays. Do you have a specific publishing schedule? How often are you filming?

TH: So my publishing routine, or habit, is like, you know in January, February, March, no brands are watching content really. So for me that’s the perfect time to test out content and see what’s working and what doesn’t work. Then around March time is when I figure out strategy and combine everything I learned throughout those three months of trial and error. It grew up from there instantly. I think gained a million subs in like four or five months, six months, after that trial-and-error stage.

So my publishing routine, like habit. So like, you know, January, February, March has been like no brand and like watching content really? Yeah. So like for me that’s like the perfect time to test out content and then see what working and what doesn’t work. And then around that March time is when I figured out our strategy and then I just combined everything I learned throughout the three months of trial and error and just grew up from there in instantly. I think I hit them. I gained a million stuff in like four or five months. Six months. Yeah. After like, after that trial and error stage.

But my daily routine, I wake up, I go to the gym. Usually up I’m from like 10 a.m. to 3 a.m. every day, working. So two hours at the gym, where I am at right now, and after that I eat and I plan out my day. So today I have to make a brand-new picture for my university today. I gotta work on that and then I have to write some scripts, do the voiceover. Figure out how I’m gonna plan it out.

That takes up most of the day, till like 8 p.m. Then I also teach as well, Rubik’s Cubes, like private lessons. I’m very small on that. It’s just a thing I do to relax and get my mind off content and just help other people. So that’s another thing that takes up my day, like maybe one or two hours a day.

After that I brainstorm at night, and then I practice my speed cubing. And for example if I buy a puzzle I have to practice it before I do a video. So one right now is the Megaminx, which I know sounds really boring, but I’m practicing it now because I have to showcase it soon.

Tubefilter: How does the planning process work for your videos? Because a lot of people making Shorts can just think of an idea, pick up their phone, and make a Short, and an hour later it’s posted. I feel like you can’t really do that with yours.

TH: So the art side, I plan and prototype and then I will make the image out in real life. The one that takes the longest actually isn’t my art. The one that takes the longest is my showcase videos. Those take me like 10 hours to edit. I’m making sure everything is engage, I make sure it’s perfect before I publish. And I have to practice the puzzle as well. So about 10 hours, sometimes 10 hours at most. Then I write the script as well, I don’t just pick up my microphone and do a voiceover. I script and make sure they’re good, engaging talking points. Then I make sure the clip has some interesting shots.

Tubefilter: Do you have any thoughts about making short-form versus long-form?

TH: Yeah. So I recently did a long-form video, my first one in over 10 months or something, and it has 4 million views. That really boosted my confidence. I’m like, “Oh, I can go into long-form now.” I have a little formula, I might figure it out. Maybe. I’ve only done it once so far. But I’m gonna replicate it again very soon.

TH: Yeah. That’s kind of how I am right now. I want to go into long-form. I want to vlog. I’m also testing long-form strategies as well. Like I did a vlog recently just as a testing for analytics and I think the audience engaged well with it, but it had a huge, like, retention issue. So I gotta work on that.

Tubefilter: What else are you focused on for the next year or so?

TH: Long-form is definitely my biggest priority right now because that’s such a significant revenue increase from Shorts. That one long-form video made so, so much more than my Shorts. But yeah, definitely focusing on long-form, traveling more. I’m making content with ZHC. We’re gonna make a video together on his channel.

TH: Yeah. So that’s my other deal. I like traveling, meeting other creators, and learning as much as I can. I’m so new. I’ve only been doing YouTube for like a year, and TikTok for two years.

Tubefilter: What made you come over to YouTube after you started on TikTok?

TH: Um, this is by accident. I was takng a nap one day and I’m in this group chat for Rubik’s Cubers. They’re not big on YouTube besides this one guy, he has like 200,000 subs and he was the biggest of all of us. So he told everyone in the group chat, “Post on YouTube Shorts right now, like immediately.” I was like, “Yeah. I’m listening.” And I’m the only one who took his advice, and I’m the only one who blew up out of the group chat.

Tubefilter: People who see that early stuff are amazing. I’ve heard from a few other creators, mainly cooking creators, who got similar advice from friends and also blew up.

TH: If it wasn’t for him, I don’t think I could be doing social media content full-time.

Tubefilter: Are you focused equally on TikTok and YouTube? Do you make the same content for both platforms?

TH: It depends. So if you check right now, it is kind of the same. Because brands, they want me to post on TikTok rather than Shorts. So I have some brands posting on TikTok and then some posts on Shorts that are not on TikTok, because of the audience. I have a much more engaged audience on Shorts than TikTok, so some content I actually get away with on Shorts, on TikTok it’s not gonna do well.

The reason why…It’s kind of hard to explain. There’s more Rubik’s Cube on YouTube than on TikTok, so it makes sense to tailor it to that side. But I do want to experiment, just post like the one that I think won’t go on TikTok and just see how it does again. I haven’t touched like a month.

Tubefilter: Is there anything else you want to talk about or feel like readers should know?

TH: Pinterest is the nicest community ever. I’ve posted some videos there and they blew up.

TH: Yeah. They have their own thing, it’s kind of like Reels. It’s called Idea Posts, and it’s pretty cool. You get exposure. I think that’s an untapped thing no one goes into.

Tubefilter: I was going to say, I don’t think I’ve talked to any other creator who regularly uses Pinterest.

TH: Yeah, I experimented a bit because someone told me I should start working on Pinterest. I’m like, “Okay, let’s try it now.” And then yeah, I blew up on there too.

Tubefilter: You mentioned it’s a very supportive community. Can you talk more about that?

TH: They’re very engaged with the content, and as opposed to like…I think out of any other platform, like Instagram Reels, Shorts, TikTok, Pinterest is probably the most engaged in terms of positivity and pointing things out. Like if I make an art post, there would be hundreds of comments reflecting on the picture. So I think it’s cool to engage with them on a deeper level of interest. Then you can probably transfer that off to YouTube and they’ll maybe be a long-term fan.