Creators On The Rise: Wendigoon’s YouTube career is the tip of an iceberg 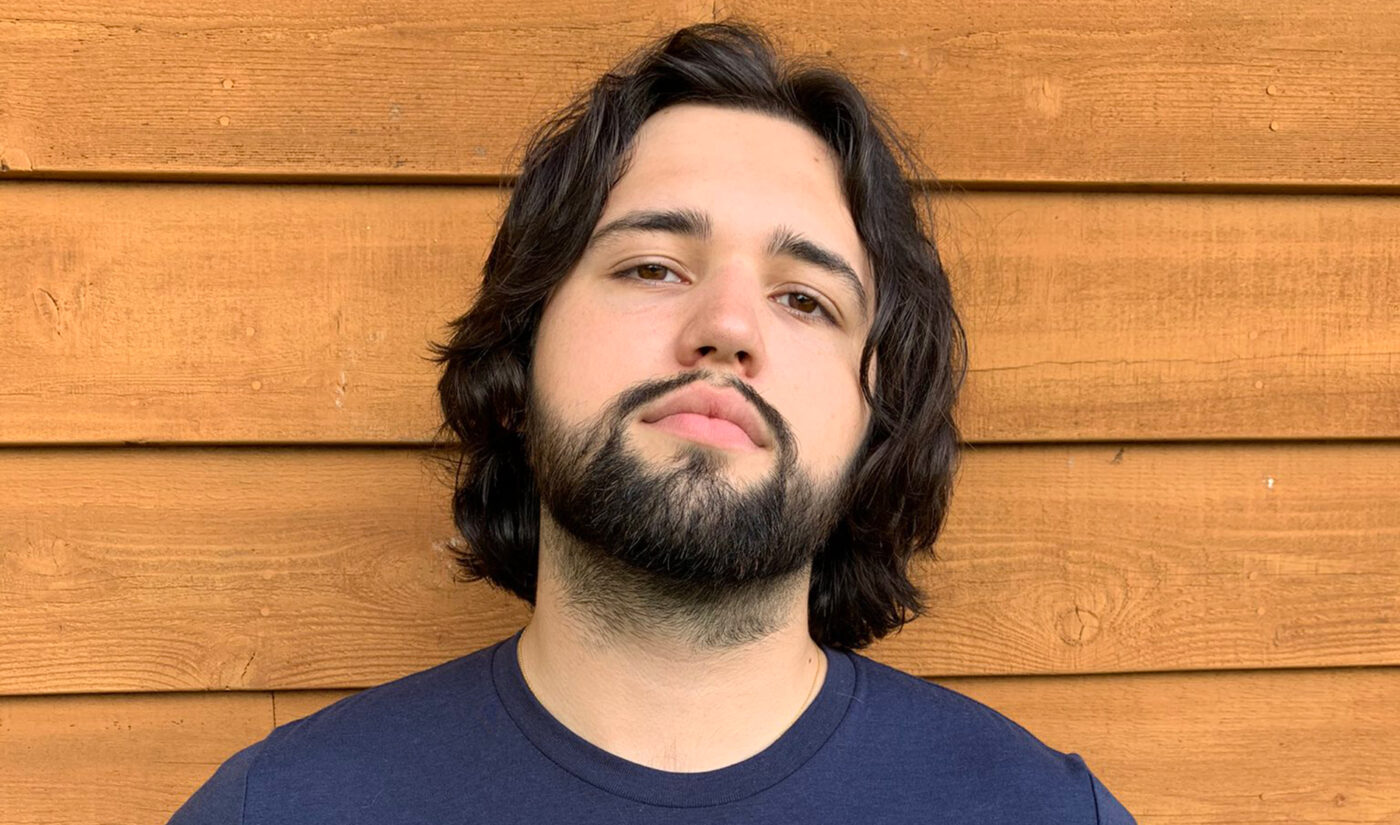 Wendigoon grew up surrounded by legends.

As a kid living in the curl of the Appalachian Mountains that stretches along the eastern edge of Tennessee, he would hear stories about the wendigo–a cannibalistic creature of Native American and First Nations myth–and other dwellers of the deep woods. Things that, his grandfather told him, were to be both feared and respected.

As he got older and YouTube rose to popularity, Wendigoon’s childhood interest in the unexplained led him to content creators whose entire channels revolved around everything from ancient myths to urban legends to debunking conspiracies and untangling rumors.

His original career plan was to get into the medical field, and in 2020 he was three years into a pre-med biology degree (and finding it wasn’t quite as good a fit as he’d expected) when he “just decided,” he says, that he was going to take a crack at starting his own channel.

It’s a big commitment, leaving pre-med for a moonshot at making it on YouTube. And, to be fair, Wendigoon’s first few videos didn’t do so hot. He made about a dozen from September to November 2020 that got “10 or 20 views” each in the days after they were posted (though they’ve grown beyond that now).

Then, on Nov. 20, 2020, he posted a video that changed his channel’s trajectory: The Conspiracy Theory Iceberg. Wendigoon explains what iceberg charts are below, but the short version is that the tip of an icerberg is something everyone can see, and almost everyone knows. It’s only when you dive further down that hidden aspects become apparent.

The iceberg method of looking at a topic proved popular with his viewers. That video was his first to cross 1,000 views. So Wendigoon stuck with it, making more and more until, a couple months later, he posted an hour-and-20-minute-long dissection of disturbing movies.

By the end of the week, that video had crossed a million views. 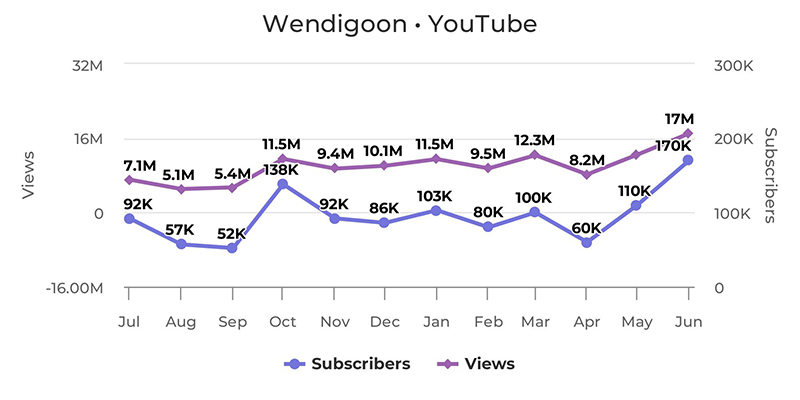 These days, Wendigoon’s channel is tipping up over 15 million views a month, and he gains well over 100,000 subscribers each month, too. He’s branched out a bit from conspiracy theory icebergs to cover historical subjects like failed company town Fordlandia and the Tokyo Rose propagandist effort.

He’s also branching out to creating his own original stories. He recently completed a short movie script with Evan Royalty, a YouTuber who makes fan films for collaborative horror writing project SCP, and the two plan to begin filming later this year.

Check out our chat with Wendigoon below.

Tubefilter: For someone who’s reading this and has never seen your videos and doesn’t know who you are, where are you from and how did you get into YouTube?

Wendigoon: I’m from eastern Tennessee. I’ve lived in the southern Appalachia region my whole life. I’ve been into YouTube ever since I was a kid. YouTube has been kind of the thing that has dominated my entertainment ever since I was a little guy, as soon as I was able to operate a computer. Especially when I was watching the early days of YouTube, in the early 2010s, I was so interested in the horror content, the YouTube personalities, and everything else you could find on the site, and when I got older I decided it was something I wanted to do myself.

So when I was in college I decided I wanted to take a shot and see if I could talk about weird stories and be like some of the people I look up to. I’ve been blessed to have it work out.

Tubefilter: You tend to produce really lengthy videos—like many of your video essays fall in the 30- to 40-minute range. That’s a lot of time to invest. What does your production schedule look like on the back end?

Wendigoon: It depends on the video. Normally most of my videos come out around an hour long, so depending on the topic, it’s normally like three or four days of research, a day of filming, and then a few days to edit. It comes out to about a week per video, which at my current rate of trying to do about three videos a month, it pretty much fills up all my time.

Tubefilter: Do you have anybody helping you?

Wendigoon: I have a friend who’s been editing with me, and just last week I asked if she’d like to go more full-time. But up until the last couple of videos it’s just been me.

Tubefilter: How old are you?

Tubefilter: Gotcha. Did you end up going to college at all, or what were you up to when you started the channel?

Wendigoon: So I worked a few odd jobs, but my main job was as a full-time college student. I was a pre-med biology major, so I had done three years in a biology degree. It was around that time that YouTube just blew up and I decided that’s what I wanted to do with my life. So I didn’t sign up for my fourth year of college, and just stuck with the YouTube.

Tubefilter: That seems like a big commitment. Clearly it’s working out for you, but it’s a daunting commitment to walk away from pre-med for YouTube.

Wendigoon: It was certainly a big deal for me. I’ve always been interested in stories, either telling stories or writing stories. I write a lot of like short horror stories and stuff like that on the side. That’s always been where my interest has been. And while I kind of enjoyed the biology route, after getting in it, I realized it wasn’t for me, or it wasn’t what I was thinking it was going to be initially. So whenever YouTube started to do well, for me it wasn’t really a choice between two different interests.

Tubefilter: Where does your channel name come from?

Wendigoon: So the wendigo is a creature that comes from northern Appalachian legend, specifically the Algonquin tribe. It’s the idea of a spirit that inhabits the souls of those who commit cannibalism. It’s an old kind of urban legend within the mountains.

My grandfather, as I was growing up, would tell me these stories about the wendigo, and he would treat it like a boogeyman kind of figure in the woods, but he also taught me that the wendigo is to be respected, because nature has nature’s place and humanity has their place. He taught me all these cool concepts of lore and learning and legends that, from a young age, drove me toward the interest I have now. So that’s always been a personal aspect to me.

And then “goon” has been a nickname for guys who do weird stuff like I do where you put on night vision goggles and you go running around in the woods at night like a maniac. So whenever it came time to decide a channel name, I just combined “wendigo” and “goon” and came up with Wendigoon.

Tubefilter: It’s been almost exactly two years since you started your channel. Aside from, like you said, bringing an editor on full-time las tweek, has anything else evolved with your content?

Wendigoon: Yeah, a lot. When I started YouTube, I used an iPhone and no microphone. So that was the level we were on from the get-go. [laughs] There’s been a lot of learning between now and then.

Thankfully I still have the same passion to make videos and make content as I did back then. However, you know, getting a microphone was a good step up. It’s changed from a technical aspect. And I’ve learned a bit more of how to cover topics as well. I look back at some of my old videos when I wasn’t as keen on how to do research or how to frame a narrative, and I feel like my storytelling ability has improved since then. But it’s always been me talking about weird topics that I think are cool.

Tubefilter: Your views have been ramping up over the past few months. Do you remember if there was a specific video that took off?

Wendigoon: In the beginning, I was getting like 10 or 20 views a video. The first video I remember that crossed 1,000 was when I covered the conspiracy theory iceberg. That gave me a step up on the channel. And then I remember I covered a couple more icebergs and they each went up. Oh, then the video that blew me up was the disturbing movie iceberg. That video hit a million views in a week. So going from a couple thousand videos to a million in a week was life-changing for me. That’s been the single biggest jump I’ve seen on my channel.

As of the last few months, it looks like it’s just been steady growth. My videos have been going from an average of 800,000 views to a little over a million views per video, and I’ve just seen videos across the entire channel grow. Since the disturbing movie iceberg, I can’t tell if there’s been a big spike in one video necessarily, rather than just videos across the channel doing well.

Tubefilter: Can you give us the tl;dr on icebergs for anyone who’s unfamiliar?

Wendigoon: An iceberg is a sort of info chart that floats around online and the way they’re structured is they start with—for whatever topic you’re working with—a series of relatively known or open secrets about a subject. But as you go down the chart, they keep getting more obscure or more unknown or more gruesome or whatever the topic of the chart dictates.

So for me starting out on YouTube, iceberg charts were a great way to cover a lot of information at once. The disturbing movie iceberg that shot up my channel is just that: a chart of disturbing movies. It opens with things that we’re all familiar with, like The Conjuring and The Texas Chainsaw Massacre. But as you go down, it starts to become more obscure or even illegal movies and eventually you get to the dreaded snuff films. So I covered that iceberg and that’s what shot the channel up. I covered several more after that that had a similar effect.

Tubefilter: Do you have any goals for yourself as a creator moving forward? Any plans for the rest of the year?

Wendigoon: I have a lot of plans coming up with videos. Several of them I can’t necessarily talk about because they’re collaborations with other creators. What I will say for now is that they’re more of a documentary style and they take place outside my little corner bedroom that all my videos have been made in. So hopefully some larger projects that may be interesting to people who like my content currently.

I also just finished writing a script with Evan Royalty. A lot of people know him online as the guy who made the SCP movies. He and I wrote a script and at the end of this year we’re gonna be filming a movie set within the S.T.A.L.K.E.R. universe.

Tubefilter: Is there anything else you wanted to bring up? Anything you feel like people should know about you or your videos?

Wendigoon: I will say I attribute all my success to God. I’m a Sunday school teacher as well. That’s, I guess you would say, like my day job. I try to be as much of a Christian in every way I can and I attribute this success and the privilege I have to talk about this kind of stuff to God, and I’m thankful for the opportunity he’s given me.