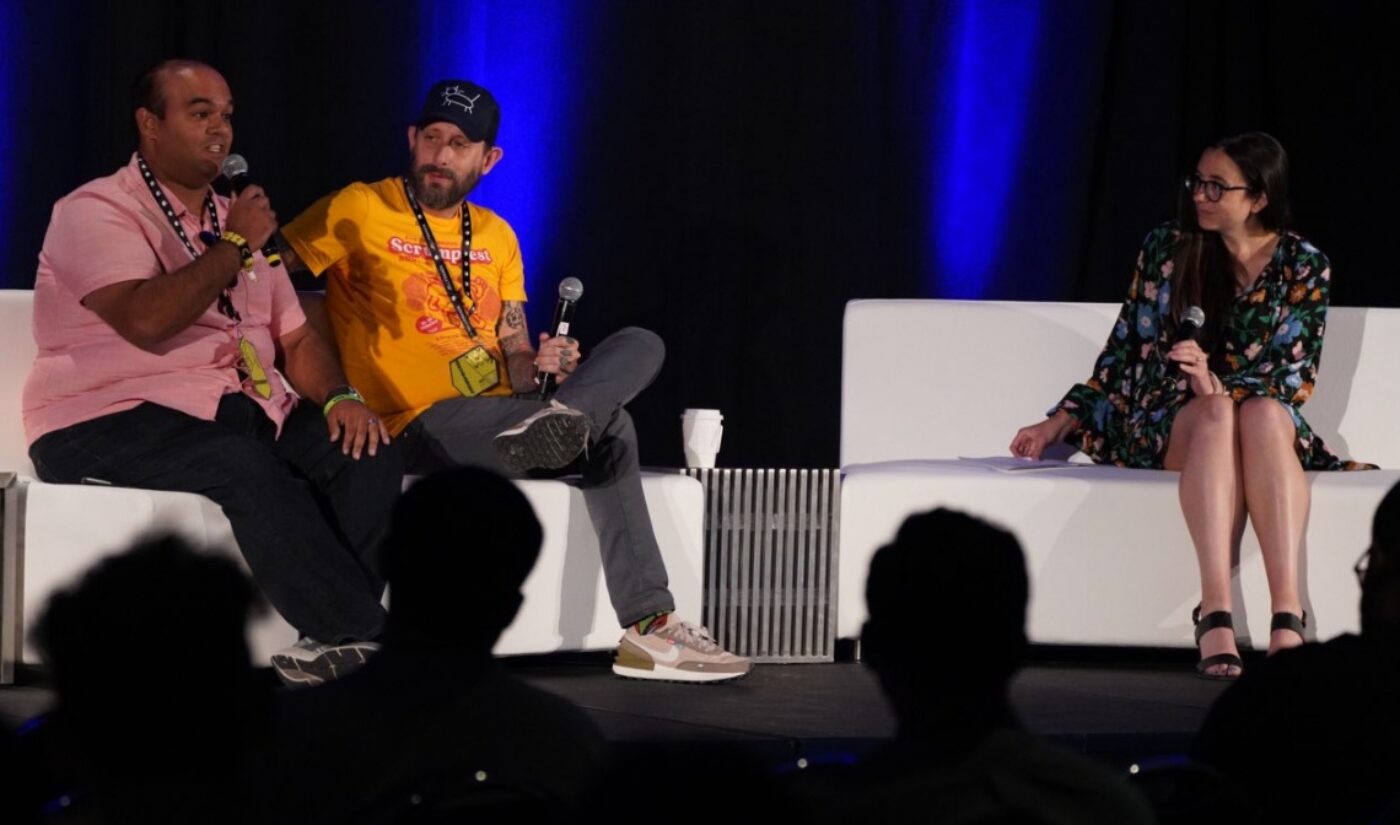 The podcast industry has evolved considerably since the last in-person VidCon in 2019. U.S. podcasting is now a $2 billion business, and one organization that has taken advantage of that shift in consumer attention is Rooster Teeth. Through its audio network The Roost, the Austin-based media company distributes podcasts from renowned creators, including Anthony Padilla, Grace Helbig, Mamrie Hart, and some of its own homegrown talent. These shows have collectively pulled in 87 million video views, according to The Roost’s website.

Given how heavily Rooster Teeth has prioritized podcasting, I was curious to see how the company’s execs would define “video podcasts” at a June 24 VidCon panel. The result was unexpected: Rooster Teeth co-founder Geoff Ramsey and podcasting head A.J. Feliciano claimed that a video podcast doesn’t need to incorporate video at all, and some consumers won’t even think of those videos as podcasts.

“A video podcast is neither a video nor a podcast” sounds like some Magritte-esque abstraction, but that idea becomes clear in the context of contemporary consumption habits. As Feliciano explained, young viewers “may see no difference” between a normal YouTube video and a podcast episode that has been uploaded and accompanied by a still image. The bottom line is that listeners will head to the platforms where they’re most comfortable, and if you want your podcast to reach as many people possible, it needs to follow consumers to their favorite platforms — even if those platforms seem unsuitable for long-form audio programming.

“Podcast consumption is a conditioned behavior based on who you’re talking to,” Feliciano said. Older listeners tend to prefer Apple Podcasts, while the younger set flocks to YouTube and Spotify. Gen Z consumers may not even describe an hour-long, audio-centric YouTube video as a podcast, even if an older viewer would see it that way.

In total, Rooster Teeth’s podcast programming can be found on 170 platforms, which reduces “the barrier to entry for your audience,” Ramsey said. The host of the F**kface podcast called himself platform agnostic. “I just want to be out there as a creator,” he said.

Even platforms that don’t offer long enough runtimes to house a complete podcast episode can be part of the marketing mix for an audio show. Feliciano called TikTok an “absolute must” on that front, as it can be used to share clips and “broad appeal moments.”

The assertion that video podcasts are less about the medium and more about the distribution strategy is in line with the philosophy that has driven Rooster Teeth through an ever-changing digital media landscape. Even when the company was dominating YouTube with its Let’s Play videos, it didn’t see its stars as gamers. Back in 2017, Rooster Teeth’s Jack Pattillo told Tubefilter that he and his colleagues are “improv comedians who use video games as our tools.” During the VidCon panel, Ramsey expressed a similar idea. He discovered that “our non-narrative content all gravitated around conversations.” It can live in any format and on any platform so long as it maintains that feel.

Rooster Teeth’s willingness to constantly rethink its approach to media has allowed it to stay relevant nearly two decades after it first released the groundbreaking web series Red Vs. Blue. As the company looks to the future, it is hoping to see a world in which podcasts have even more discoverability and cross-platform appeal. Feliciano said that YouTube’s ability to apply its algorithm to audio will help new podcasts get noticed. Added Ramsey: “There’s an audience for everything if you can connect with them.”