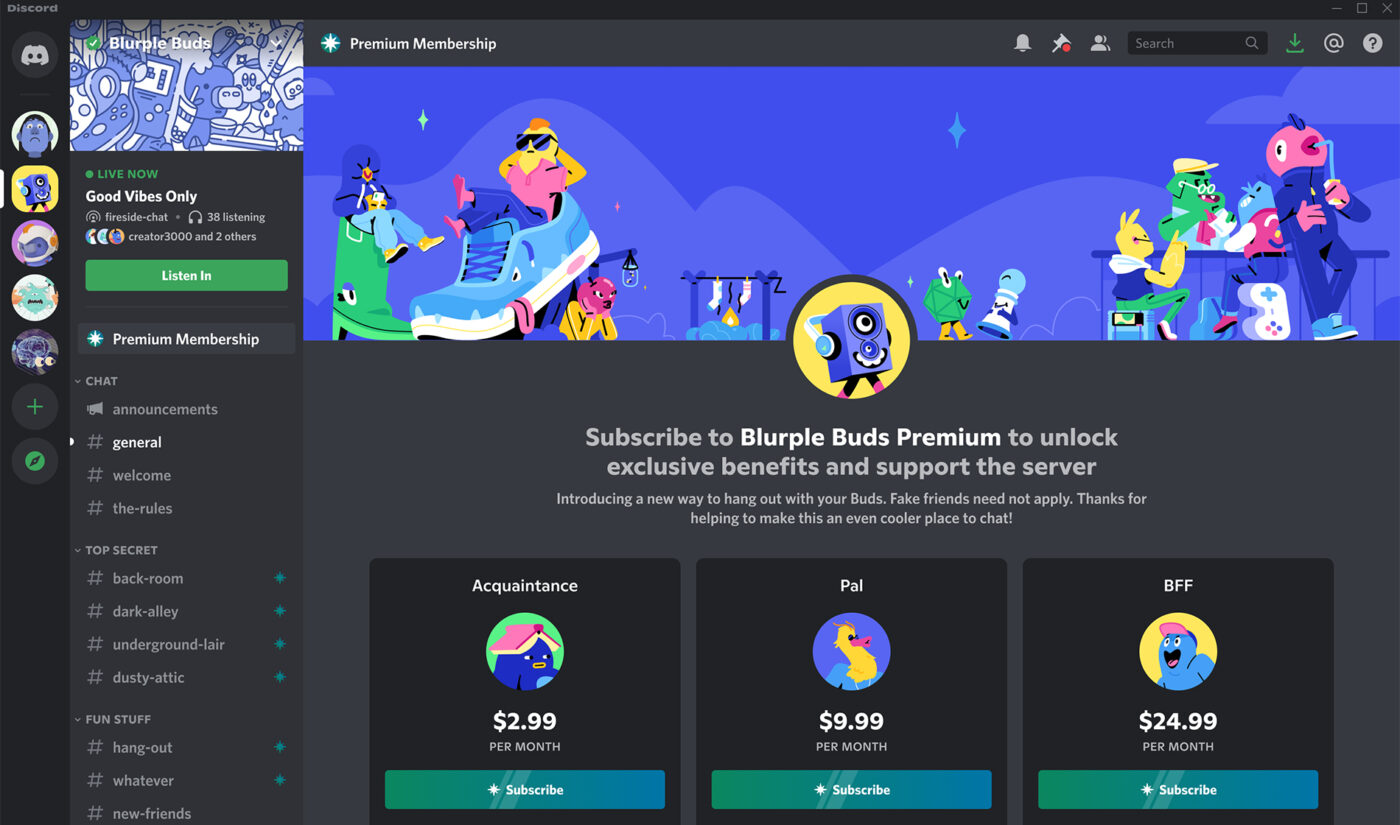 Discord is bringing premium memberships to “many” more servers this summer, it says.

The chat platform, which has more than 150 million monthly active users and has become a community-building staple for thousands of content creators, began testing memberships with a handful of servers late last year.

Discord’s premium memberships are similar to established subscription features on platforms like YouTube and Twitch. At their core, they let creators offer perks and/or extra content in exchange for a monthly fee. Creators can use memberships to do things like paywall their servers (or parts of their servers—think members-only channels) or just to dish out extra content, like access to VIP voice hangouts.

Creators can customize up to three different membership tiers, and charge subscribers anywhere from $2.99 to $99.99 per month. They get 90% of what they charge; Discord takes the other 10% as its fee.

Back when Discord revealed premium memberships would be a thing, it said it planned to test them with around 20 creators/server owners and their communities.

Now it says that, based on feedback from those testers, it’s adding a few things before premium memberships’ wider debut: a new analytics dashboard with “insights on revenue categorized by date, membership tiers, and more”; a free trial period for potential subscribers, which Discord thinks will help “drive higher conversion”; and a set of emojis that only members will be able to use.

The plan is to keep working with creators to develop more premium membership tools, Discord says.

It didn’t specify exactly how many servers will get access to premium memberships, or what the eligibility requirements will be. It did say this summer’s rollout will only include U.S.-based servers.

“Behind the Communities people love to call home on Discord, there’s often a team of moderators who dedicate their time to organize and foster spaces for users to find belonging,” Discord said in a company blog post. “As a server grows, mods and admins might find themselves dedicating an increasing amount of time to manually keep their server clear of unwanted behavior and content.”

AutoMod is intended to support server mod teams by using keyword filters to automatically detect and freeze unwanted or rule-violating messages before they’re posted, flag the users trying to post them, and ping mods with alerts about what’s up.

Discord has already programmed AutoMod with three starter lists that “cover certain categories of not-nice words or phrases,” it says, but server owners/mods can add up to three custom sets of rules specific to their communities.

AutoMod is available now on all servers.