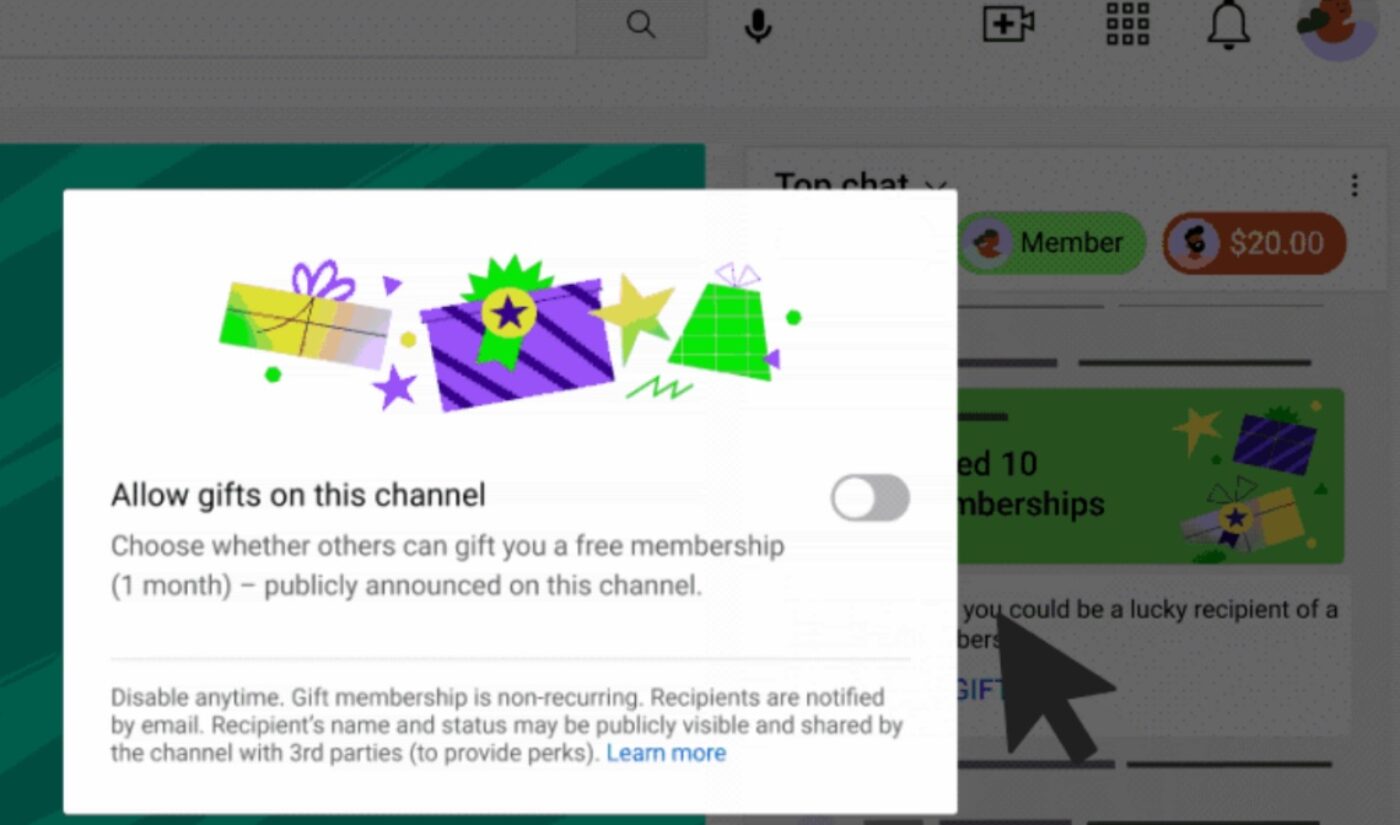 YouTube has given a present to live-streaming creators: Gifted Memberships.

As of May 11, YouTube’s Channel Memberships can be given as gifts. Live stream viewers buy the Memberships in bulk, and the purchased items are then given away to the most-engaged viewers.

To purchase a channel’s Memberships as gifts, you must already have a Membership for that channel yourself. If you do, you can click a dollar sign next to the live stream chat window to purchase additional Memberships as gifts. Viewers won’t be able to receive the free Memberships unless they choose to “Allow Gifts” via a pop-up menu. If they want to hit the jackpot, they can increase their odds of receiving a Gifted Membership by watching and interacting with the associated channel.

Memberships, first launched in 2018, followed up the 2017 introduction of Super Chats. Both features mimic monetization options found on Twitch; the former resembles Subscriptions, and the latter takes after Cheering. Twitch subs can be gifted too, and the arrival of this process on YouTube is good news for creators. It’s also a sign that YouTube — despite signing all the streamers who are leaving Twitch — is still catching up to its Amazon-owned competitor in terms of live monetization.

In a blog post, YouTube said that gifting a Membership will result in the same revenue split as a normal purchase. 70% of the resulting revenue will go to creators, and YouTube will take the remaining 30%. Members can purchase 5, 10, or 20 Gifted Memberships at a time.

YouTube announced Gifted Memberships last October, but the feature isn’t arriving for all live-streaming creators just yet. “Starting tomorrow, we’re excited to bring a beta version of Channel Memberships Gifting to a small group of creators,” reads an introductory blog post. “Over the next several months, we’ll be actively expanding the feature to even more creators.”

Users who want to try out Gifted Memberships can signal their interest via a request form. YouTube said it will try to provide access in the “next few months” for interested creators. And for now, Gifted Memberships can only be purchased from desktop devices. A mobile version of the monetization source is purportedly in the works.