YouTube Millionaires: Vlad SlickBartender wants to be the most-subscribed-to cocktail-maker on YouTube–so watch out, Ryan Reynolds 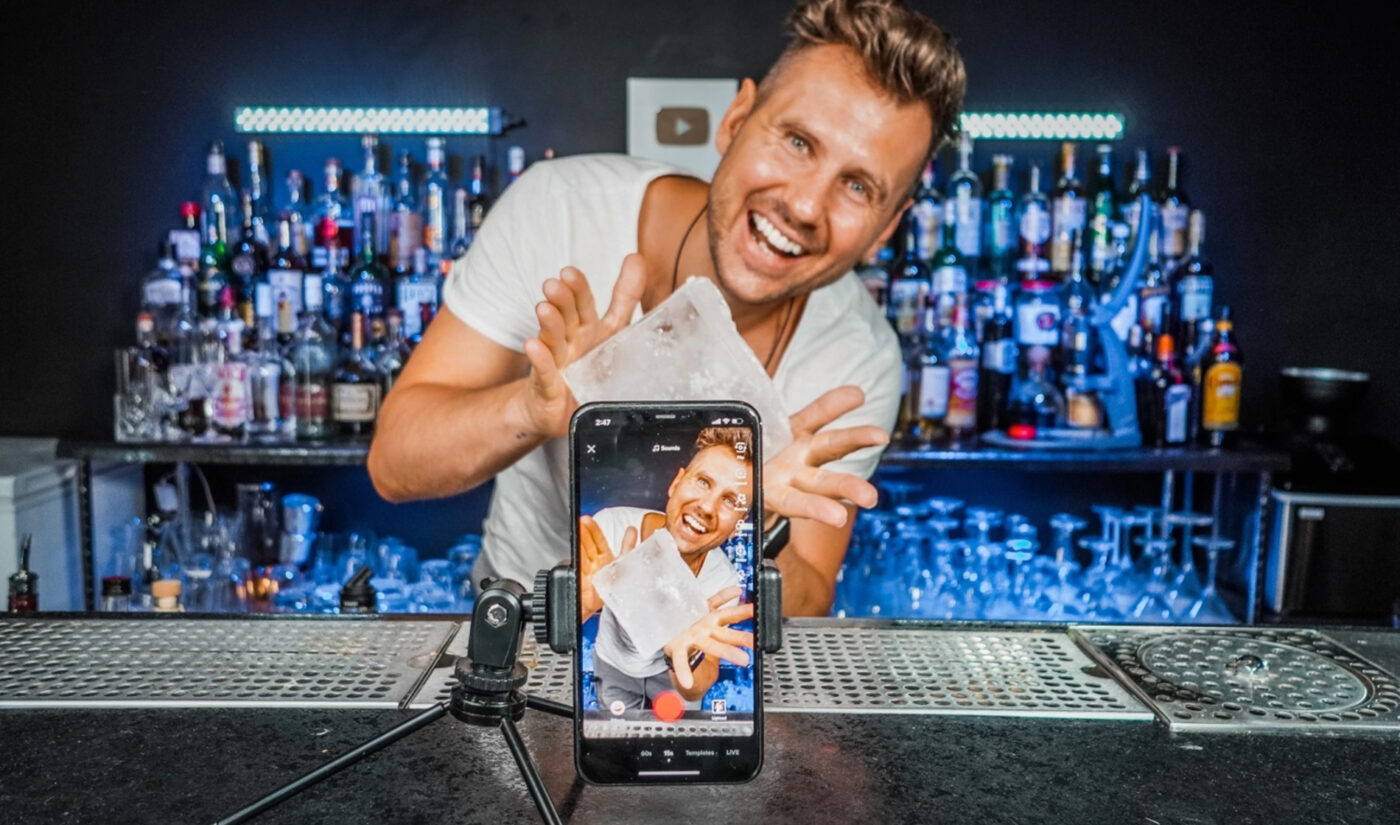 Vlad Buryanov is throwing down the gauntlet.

Buryanov is becoming a big deal on YouTube. We profiled him back in January for our series Creators on the Rise, after his channel leapt from a couple hundred thousand followers to 960,000, and from under 10,000 views per month to 72 million in December. Since then, he’s gained another 600,000 subscribers, and his viewership grew to 110 million views in January, 112 million views in February, and 92 million in March. He’s already at 50 million for this month, boosted by collaborations with creators like Nick DiGiovanni and Milad Mirg.

All of this is great for Buryanov, but he’s a competitive guy. After Tom Cruise‘s character in the 1988 film Cocktail inspired him to try flair bartending, Buryanov went on to win more than 50 competitions, including three world championships.

So while he’s happy to have hit one million subscribers, he’s already got his eye on surpassing another number: 3.66 million.

That’s how many subscribers Ryan Reynolds has.

Reynolds, as you may or may not know, owns a stake in Portland-based Aviation Gin. And since his YouTube channel is a motley mix of videos promoting his projects, he’s of course made multiple clips about Aviation–which, Buryanov figures, makes him the most-subscribed-to cocktail-maker on YouTube.

Tubefilter: So first, welcome back to Tubefilter, and congrats on hitting one million subscribers! Has anything changed since we spoke to you for Creators on the Rise? Have you gotten any cool new opportunities?

Vlad Buryanov: The opportunities that have come with hitting a million have been amazing. I got to collaborate with some great creators such as Nick DiGiovanni, Dylan Lemay, and Milad Mirg. Many content creators had the chance to get together and create content at the Beverly Halls’ house, which was incredible, and Shorts are still helping me grow. I already have over 200 million views on my main channel, which is really hard for me to believe most days. I also just recently signed with the management company Made In Network, so I’m excited to see what new opportunities they will help unlock.

For those who may not know you, give us a quick intro about how you got into flair bartending!

Probably like many other bartenders who were inspired after watching the movie Cocktail with Tom Cruise. Seriously though, I absolutely loved the flair bartending competitions that rewarded you for your creativity with new moves and tricks and your ability to entertain the crowd. I loved implementing flair behind the bar, because the more I was able to entertain my guests, the more I would be rewarded with tips. It was the most fun job I ever had before becoming a YouTube creator.

Tubefilter: What did it feel like to hit one million subscribers? Was that a goal you’d been working toward and something you hoped to accomplish?

VB: As a flair bartender, I traveled around the world competing in flair bartending competitions. I won more than 50 competitions, including some world titles. Winning world titles was an incredible feeling, but it doesn’t even come close to feeling as good as it does to hit one million subscribers. I really believed I would hit a million someday, but I figured it wouldn’t be for at least another five years.

But YouTube is like a snowball effect. The more you post, the better you get and you find ways to show your audience what they want to see and then you are rewarded with growth. Since it came so much sooner than I expected, I decided to challenge myself to bring enough value and entertainment to my audience on my SlickBartender Shorts channel and see how long it will take me to get another gold Play Button.

Tubefilter: How has your content-making process changed from the beginning of your channel to now? Do you have any advice for other creators trying to get their channels off the ground?

VB: In the beginning, I shared content with a lot of knowledge that I gained over the years, such as techniques and standard procedures I was implementing behind the bar. The more you create, the more excited you get, and you want to make your content better and more pleasing to watch. I also wanted to reach a global audience, and filming on my iPhone 4 in the garage with bad audio just wasn’t working anymore. I began watching to see what other creators were doing around me, and did my best to do it all better—including audio, image quality, editing, and telling an engaging story to bring maximum value to each episode.

The number one piece of advice I have for new creators is to make sure to start uploading videos, but also ask themselves if they will still be excited to upload in five or ten years in this genre, so they aren’t limiting themselves right away.

Tubefilter: We’d like a drink! What’s your favorite recipe at the moment?

VB: I’m simple when it comes to drinking. I prefer cocktails with a base spirit, a sweetener, and a sour. A whiskey sour is a good example, or anything with ginger is also good. I began experimenting a lot with spirit-free drinks this year, and I want to do more with that on my channel in the future and see how far I can take it.

VB: Right now I am mostly focused on YouTube, and I have been recycling content on TikTok. It’s a very similar audience, but mostly on TikTok it is younger people hanging out. Things are changing quickly, but on YouTube, I enjoy the more advanced analytic tools, the ability to cross-promote my other channels, better customer service, and support.

TikTok removes a lot of content that works on other platforms without any explanation, so it can be really frustrating and there is no one to reach out to. In fact, I had a second channel on TikTok and they deleted it for impersonating someone else (me!), and I was unable to get them to bring it back.

Tubefilter: You mentioned last time that you think Shorts has been great for creators. Do you have any updates there? Has Shorts continued to be a major growth factor for your channel?

VB: I still think Shorts are amazing and they keep getting better. I have no intention of stopping. They are so much more fun to create, and I believe the growth speaks for itself. I am also experimenting with different-length Shorts. Some are less than 15 seconds, and others are the entire minute. More creators are starting to create short content, and I have many fellow creators reaching out and asking if they should start uploading short content as well. It’s a great time to get into it, because there is great potential for more views, and advertisers are now being attracted to them.

YouTube recently added a tool that is mind-blowing. I no longer have to put products in the description. I can directly tag the products in the video. So that is currently my favorite form of monetization that was missing for a long time. I use this feature in almost every video now, and my audience can just click on the tag and be taken directly to the product page so they no longer have to search for it anymore. It’s incredible.

Tubefilter: How are your adventures in vlogging going? Why do you want to get into vlogging as well as doing bartending videos?

VB: Vlogging is something that gets me out of my comfort zone. It is great practice for learning new filming techniques, and it is giving me the opportunity to get better at talking on camera. It’s also a chance to reach a new audience or a way for my existing audience to learn more about me. It gets me out of my studio so I can travel more, show different places and products, and sneak peeks behind the scenes of my main channel as well.

It’s overall great practice and not niche-oriented, but I am excited that it will provide a backlog in the future so I can look back and see the memories of what I have accomplished.

VB: I used to be an instructor, and I was able to reach hundreds of people that way. I loved seeing the excitement on their faces when they learned something new from me. Through YouTube, I don’t get to see the smiles on their faces, but I can’t tell you how much I love getting feedback in the form of comments. It makes me extremely happy to see that I affected so many lives in a positive way, and through YouTube, I am able to reach millions rather than just a few at a time.

Tubefilter: Do you have any goals for the rest of this year, as a creator?

VB: MrBeast already dueted me on one of my TikToks, so it would be cool to interact with him on YouTube someday. I would also like to pass the current most popular cocktail-maker on YouTube in subscribers. He is also a somewhat well-known actor: Ryan Reynolds.