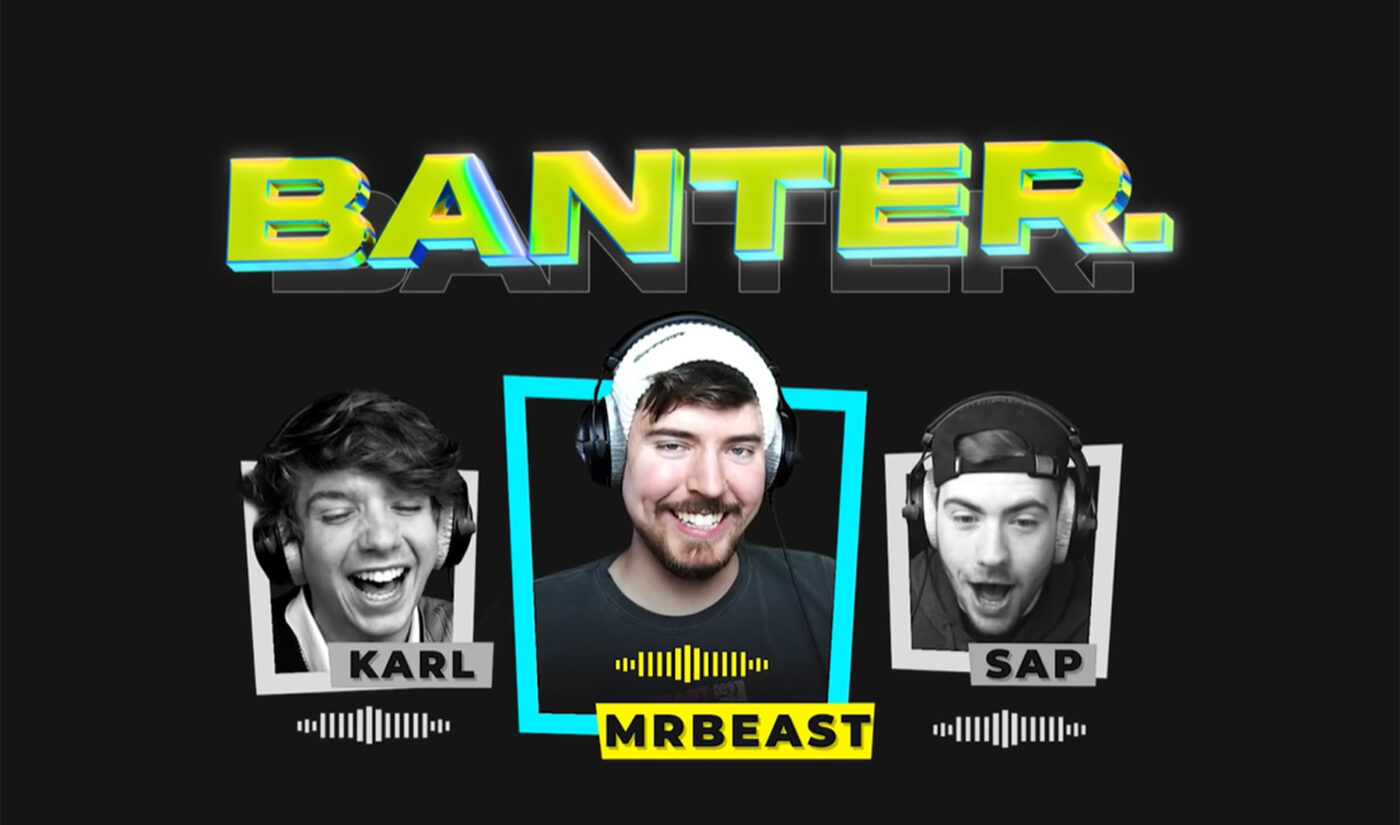 Banter, a new podcast from frequent MrBeast collaborator Karl Jacobs and frequent Dream collaborator Sapnap, managed to knock The Joe Rogan Experience from its No. 1 slot on Spotify’s charts.

The show is built around interviews with Jacobs’ and Sapnap’s well-known content creator friends. Both Jacobs–who got his start editing videos for MrBeast–and Sapnap are active Minecraft YouTubers, with 3 million subscribers and 4.11 million subscribers, respectively.

Banter’s first episode featured MrBeast himself (70.6 million subscribers) and was given the eye-catching title “How MrBeast Almost Died in a Car Wreck.” Its contents are pretty meaty: along with talking about narrowly escaping vehicular disaster, MrBeast goes back to his early days on YouTube and talks about where he thinks the platform’s heading now.

The 20-minute installment dropped Sept. 25 and swiftly overtook Rogan’s weekday series, which Spotify acquired for a reported $100 million in May 2020 and has talked up at seemingly every opportunity since.

Rogan’s show is back at the top now, as usual, but Banter is still in Spotify’s top five, likely helped by the fact that its second episode, released Oct. 2, features popular YouTube Gaming streamer and 100 Thieves co-owner Valkyrae (3.55 million) talking about “owning an eSports organization, being a face of YouTube streaming and potentially getting hired,” per the episode’s description.

We don’t have a lot of data to go on here. Spotify doesn’t often release performance metrics about podcasts, and though it publicly displays the amount of streams music tracks garner, it doesn’t do that with podcasts.

What we do know: one, Rogan has said his podcast reaches 200 million people per month; and two, an internal Spotify newsletter obtained by Business Insider said that, in its first month on the platform, The Joe Rogan Experience’s listenership accounted for 5% of all podcast streams across Spotify.

We also have some numbers for Banter outside of Spotify. Jacobs and Sapnap started a YouTube channel exclusively for the show, and to date, it’s brought in nearly 50,000 subscribers. “How MrBeast Almost Died in a Car Wreck” has 102,000 views at press time, and “Valkyrae Wants Us to Join 100 Thieves” has 17,000.

Prior to its departure from YouTube, The Joe Rogan Experience (between Rogan’s core channel and a “clips” channel) had more than 12 million subscribers and netted 240+ million views per month.