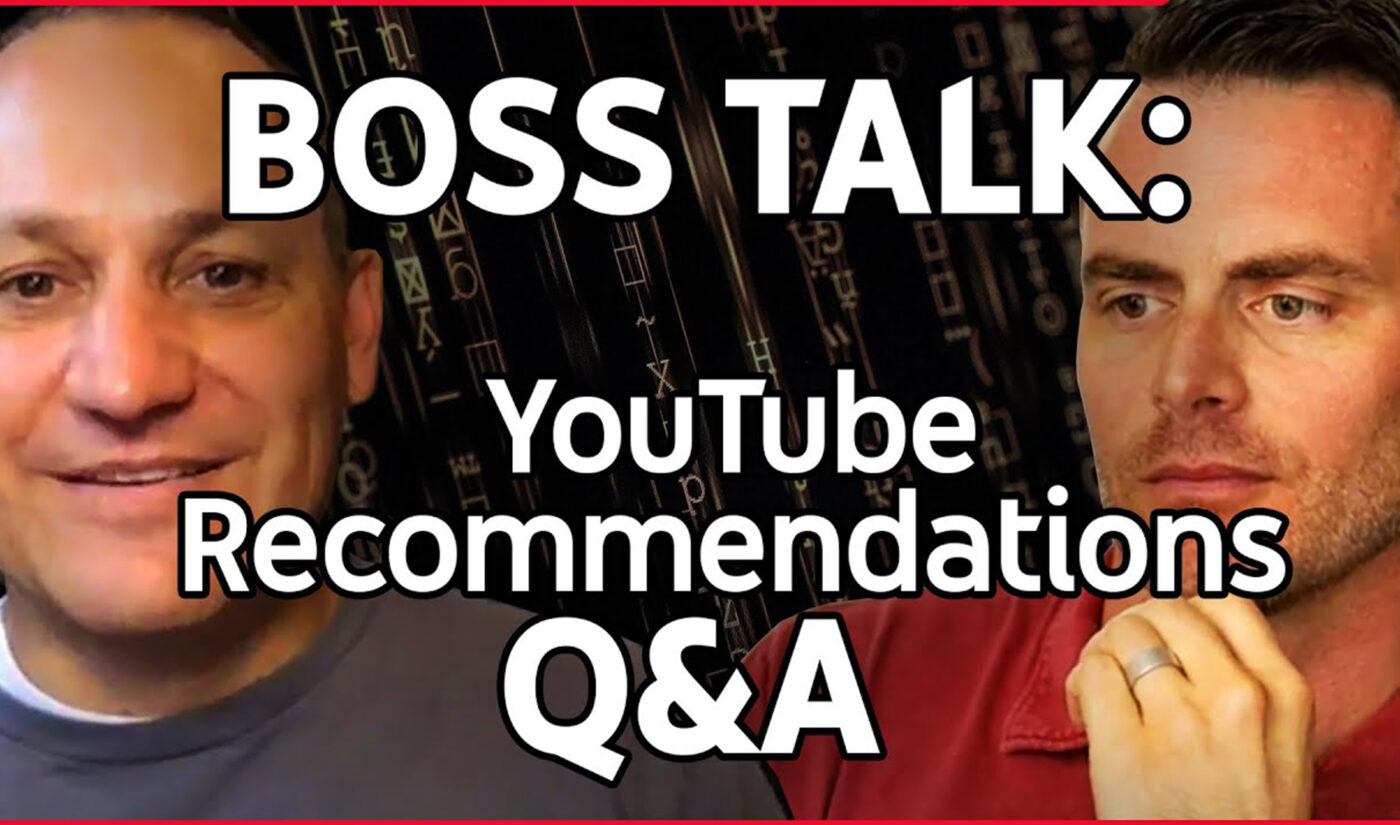 Out of all the features and facets of YouTube, its recommendation algorithm remains the most nebulous–and contentious.

In a new upload from Creator Insider, the platform pulled back the veil on its content surfacing systems, bringing in vice president of engineering Cristos Goodrow to answer a series of creator- and user-submitted questions about how and why YouTube decides to recommend certain channels and videos.

Chief among those questions was whether YouTube’s systems prioritze total overall watch time or individual user retention. The user who submitted the question posed an example: Is someone watching 50% of a five-minute video (2.5 minutes) better or worse than someone watching three minutes of a ten-minute video?

“I actually get asked this question once in a while,” Goodrow says. “After responsibility, the most important thing for the recommendation system is satisfaction. So it really depends on which of the two videos the viewer is most likely to find satisfying.”

He adds, “We find that, in general, people tend to be more satisfied when they watched more of the video–which is not a big surprise, of course.”

However, that’s not always the case, Goodrow says. Some users can watch small slices of videos and still be “satisfied,” according to YouTube’s systems. So when it comes to watch time versus retention, the recommendation algorithm considers each individual user’s viewing preferences, and might go with watch time for one, and user retention for another, depending on videos’ contents and the users’ previous behaviors.

How long does it take new videos to get picked up by the recommendation algorithm?

Another question came in from a creator who wanted to know how long YouTube’s algorithm takes to figure out content exists:

How long does it take on average for a video to be picked up by the recommendation algorithm? I’m sure it differs per video but for me it seems like my videos start getting suggested 8+ months after launch.

“Ideally, it would happen immediately,” Goodrow says. He explains that YouTube has “special pathways” for new videos “to ensure that they can get picked up.”

But there are still obstacles keeping brand-new videos from being recommended as regularly as older ones.

“The most important thing is also trying to figure out which viewers would be interested in these videos, and that’s something that’s especially hard for new videos, because we just don’t have as much information about them,” Goodrow says.

Some new videos are easy matchups with viewers–like a new Binging with Babish video, for example, might not have a tough time being recommended to someone who regularly watches cooking content. Other videos are dicier, and Goodrow says YouTube is cautious about potentially “getting it wrong” and recommending the video to an uninterested subset of viewers, which could negatively impact its traffic.

Why is YouTube more likely to recommend big channels instead of growing ones?

Next up, another frequent gripe: Why are users recommended videos from huge channels like PewDiePie, and not smaller channels?

“We actually try very hard to recommend videos from small channels,” Goodrow says. But once again, the issue with promoting small channel across the board is lack of information.

“With small channels, we have less information about who the audience is for that channel,” he says. YouTube works to combat this with “special projects” specifically dedicated to boosting growing YouTubers’ content–things like the New To You feature it rolled out in July.

Does a creator’s view to sub ratio matter?

Creators also asked how their “view to sub percentage”–aka the number of viewers their videos get who aren’t subscribed and don’t subscribe after watching–affects their chances of being recommended to other viewers. You might’ve seen a YouTuber or two (or three, or four…) you like pause during uploads to highlight what percentage of their channel’s viewership is subscribed to them–a figure that’s constantly displayed to them in Creator Studio.

“There’s no explicit formula of view to sub percentage that’s required,” Goodrow says. “And I imagine that if we looked across all the channels on YouTube, we’d find a wide range of that statistic for very successful channels.”

A daily vlog, he says, might have “a very high subscriber to viewer rate, because the audience is sort of reliable, subscribed, and comes back all the time.” How-to channels, on the other hand, could have a very low view to sub ratio, because loads of people are tuning in to their content once or twice to figure out how to tie a tie or fix a sink, not to keep up with the creator’s life.

“It is an important starting place. If a person is subscribed to a channel, then we know they’re at least familiar with that content, and all things being equal, it’s an indication to the recommendation system that this might be a person who’s interested in the video,” Goodrow says. “But relative to other things, like what have you watched recently? or what topics are you interested in? It’s not as important as other things.”

What’s one thing creators should keep in mind?

To close out, Creator Insider host Matt Koval (head creator liaison at YouTube and a creator too) asks Goodrow to share one thing he wished more creators understood about the recommendation algorithm.

“I think the most important thing to keep in mind is that the recommendation system is, for each viewer, trying to help that viewer find the videos that will be most satisfying to that viewer,” Goodrow says. “The only way to do this on YouTube, with billions of videos, is via personalization. So, you must keep in mind that everything about YouTube is personalized.”