Creators On The Rise: Austin Sprinz Uploads At Least 4 Videos A Day—And They’re Netting Him Nearly A Billion Views A Month 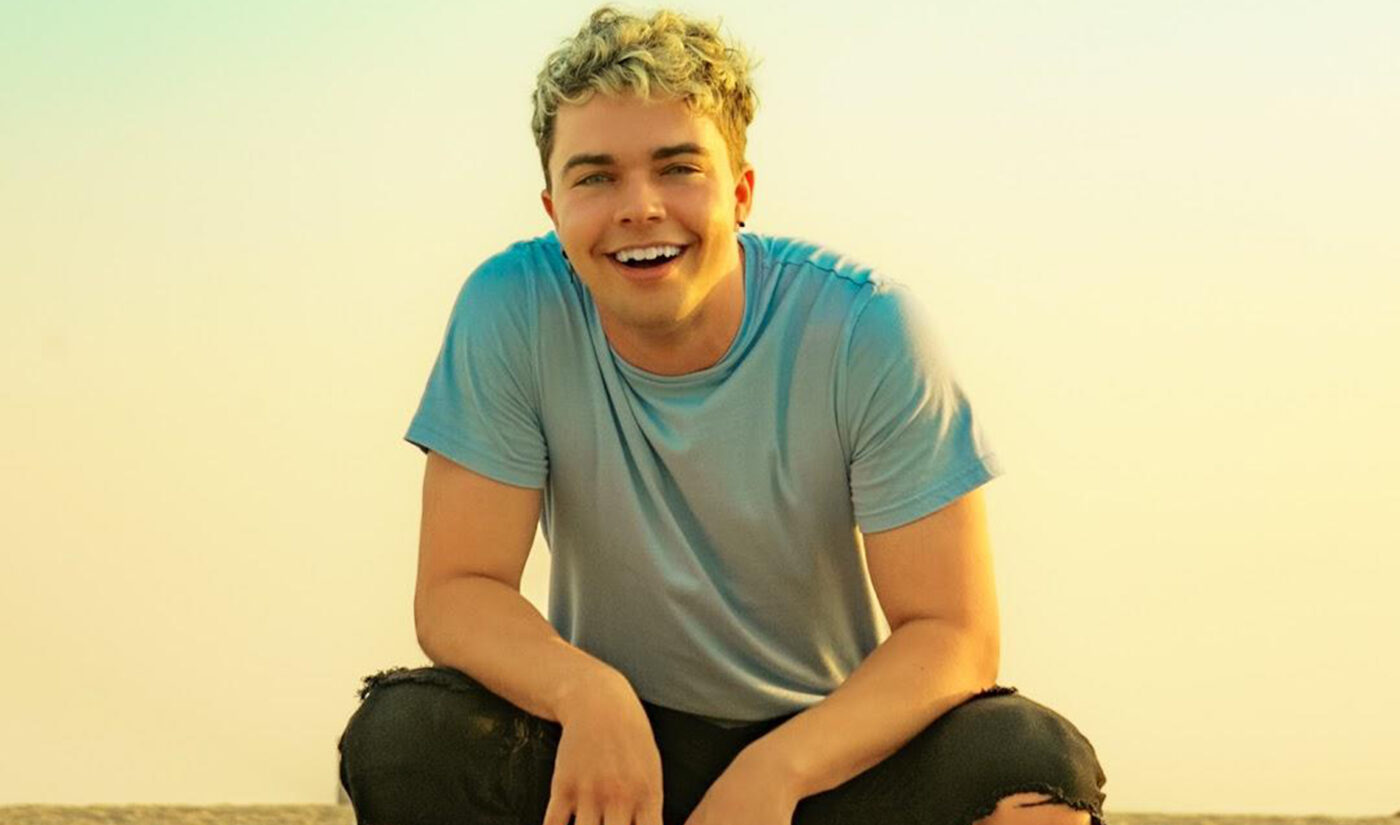 For Austin Sprinz, content creation is a family affair.

It was his sister who introduced him to his first platform, TikTok, in 2019. His earliest video appearances were in clips for her account–but when he struck out to make his own stuff, he wasn’t alone: his brother Jaden, whom we’ve previously featured as a Creator on the Rise, frequently guest-starred in his videos. Together, they came up with the mischievous challenge- and experiment-oriented content that has become a staple for both of them.

Like many of our other featurees, Sprinz didn’t set out to make a career out of content creation. But when he realized there was seemingly a method to the madness of TikTok, and that he could examine his audience’s responses to different videos and tweak future productions to perform better, he was determined to see if his findings (coupled with a regular upload schedule) could help him stake a presence on social media.

Over the past two years, Sprinz has made more than 5,000 short videos, he says. He’s uploaded between four and eight videos per day across accounts on TikTok (where he has 14.9 million followers), Instagram (830K), Snapchat (following the launch of its TikTok competitor Spotlight), and, beginning in February 2021, YouTube Shorts (2 million).

Sprinz dropped his first Shorts video Feb. 9, and since then has uploaded at least one new video every single day. His plan quickly paid off: his fourth video, a Valentine’s-themed clip uploaded Feb. 13, went viral, and to date has racked up 7 million views. His next video, chronicling his disastrous smoke bomb Valentine’s Day “gift,” also caught on, and has amassed 44 million views.

Things haven’t slowed since. Between February and now, Sprinz has uploaded more than 850 videos to YouTube Shorts, and nearly 50 of them have brought in 10 million views each. His top-viewed clip, another version of the Valentine’s Day smoke bomb video, has a whopping 237 million views, and his second most viewed–about the superviral jelly fruit craze started by his brother Jaden–has 204 million. 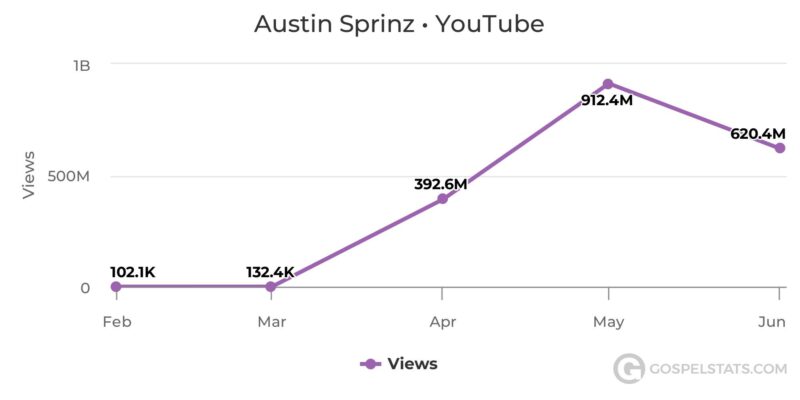 Sprinz’s channel took off after he began uploading content to YouTube Shorts in February. Monthly viewership data from Gospel Stats.

Sprinz says this success is a sign he’s on the right path. He still plans to stick to his multiplatform approach, but for now, Shorts is his main focus, and he hopes the visibility it’s giving him will provide a path to other creative pursuits, like podcasting and singing.

And, as he says in the description of every video, he also hopes his content will continue bringing new fans into the “Sprinz fam.”

Tubefilter: Tell us a little about you! Where are you from? What did you get up to before launching a TikTok account and YouTube channel?

Austin Sprinz: My name is Austin Sprinz and I am from Phoenix, Arizona. Before I did TikTok and YouTube, I was living with my mom and sister on the couch! I was working on a clothing company business that had not yet taken off. I have always been creative, and put my whole soul into everything I do.

AS: My sister found out about TikTok a couple years ago at school with her mates. She came home and was excited to try it out, and wanted me to be in the videos with her. It was a lot of fun–I loved creating video concepts that people resonated with. Not too much later, I created my own accounts and started posting tons of content. I loved building an audience and algorithmically figuring out why some things performed better than others.

Eventually I knew that creating content was what I wanted to do with my life. I had remembered that Vine shut down in the past when no one thought it would. I knew I had to diversify my content so I wasn’t solely on TikTok.

I started a lot of other platforms that had the same model as TikTok: Triller, Kwai, Likee, Vigo, etcetera. I posted actively on all of them, then added in Snapchat and Instagram, and grew there.

I feel that it’s easy to get comfortable in the social media industry working on one platform and a main kind of niche. Although, I believe being able to adapt is one of the most important traits as the social media realm is constantly adapting.

YouTube eventually released Shorts, and I saw it as another amazing opportunity to diversify and introduce a new audience to my content. I feel like it’s easier to connect with a audience on YouTube also, with all the options they have in place, like Stories, Community posts, and so on.

Tubefilter: Some your best-performing videos are challenge- and experiment-themed. How did you find this niche? Why do you think viewers enjoy it so much? How do you make your videos stand out?

AS: Creating shortform content has allowed me the ability to experiment with tons of different video concepts. I have created around 5,000+ shortform videos. Every time, I make small changes in the video, consistently testing different theories I have. I feel like doing this for so long has given me a good idea of what my audience enjoys watching. It also allows me to try new concepts that no one has done, before which help the videos stand out a lot also.

Tubefilter: Your YouTube channel has recently seen a noticeable boost in subscribers and views. Do you know which video or event triggered this increase?

AS: It really has been exciting to watch the channel grow! I don’t think it was a single video that made an impact on the growth. I believe that posting four to eight videos a day consistently had a big impact on my channel, and all of the videos that really took off had a fun storyline involved in them!

AS: YouTube Shorts has played a very big role in the growth of my account. There is a large part of YouTube that craves long-form content, but there is also a piece that likes shortform. It’s why apps like TikTok are so popular. I do feel it’s easier to grow an audience faster on YouTube Shorts rather than main–however, YouTube Shorts are not monetizable. Therefore, I recommend Shorts for any creator who is purely looking to build a connection with their fanbase and grow.

Tubefilter: What’s your production process like? How long does the average video take from conception to posting? How often do you post new videos?

AS:  My mornings are spent in deep thought working on new concepts and how to improve old ones. Have always been a fan of meditation. It allows me to clear my mind when I want to get into that creative flow. As of the moment, I have put most of my time and effort into Shorts, so the thought and creation process tends to be an almost full-day thing as of the moment.

AS: I didn’t have much growing up, and am beyond blessed to be at the point I am now, where I can make a meaningful impact on people. I hope that people watch my content whenever they are stressed or need a break, and can have a laugh. I also really hope that my content inspires people to create content of their own, if it’s something they are passionate about.

AS: The recent uptick has shown me that I am on the right path. I want to be the biggest entertainer in the world. Now that I am very active on YouTube with Shorts, I want to create more long-form content alongside it!

Content is full-time for me! I want to get into new realms very soon too! Podcasting, singing, and contribution are some areas I want to start putting a lot of time into.

AS: I love turning my content idea into a reality. I love the creation process of it, trying to decide how long to make it. What the different shots will be, how to piece it together, what the twist will be. What will my audience think of the twist? Then editing the video and watching as it’s made better and better until it feels perfect!

AS: I want to develop my brand more. I feel like long-form content helps a lot with that! I want to show people more of my personality and who I am, which is why podcasting has also really caught my interest. As of the moment, I’m spending so much time on shortform content that I haven’t been able to pursue some of these other options. However, that’s what I’m working on right now!

Five years from now, I would love to be the greatest Shorts creator on YouTube.