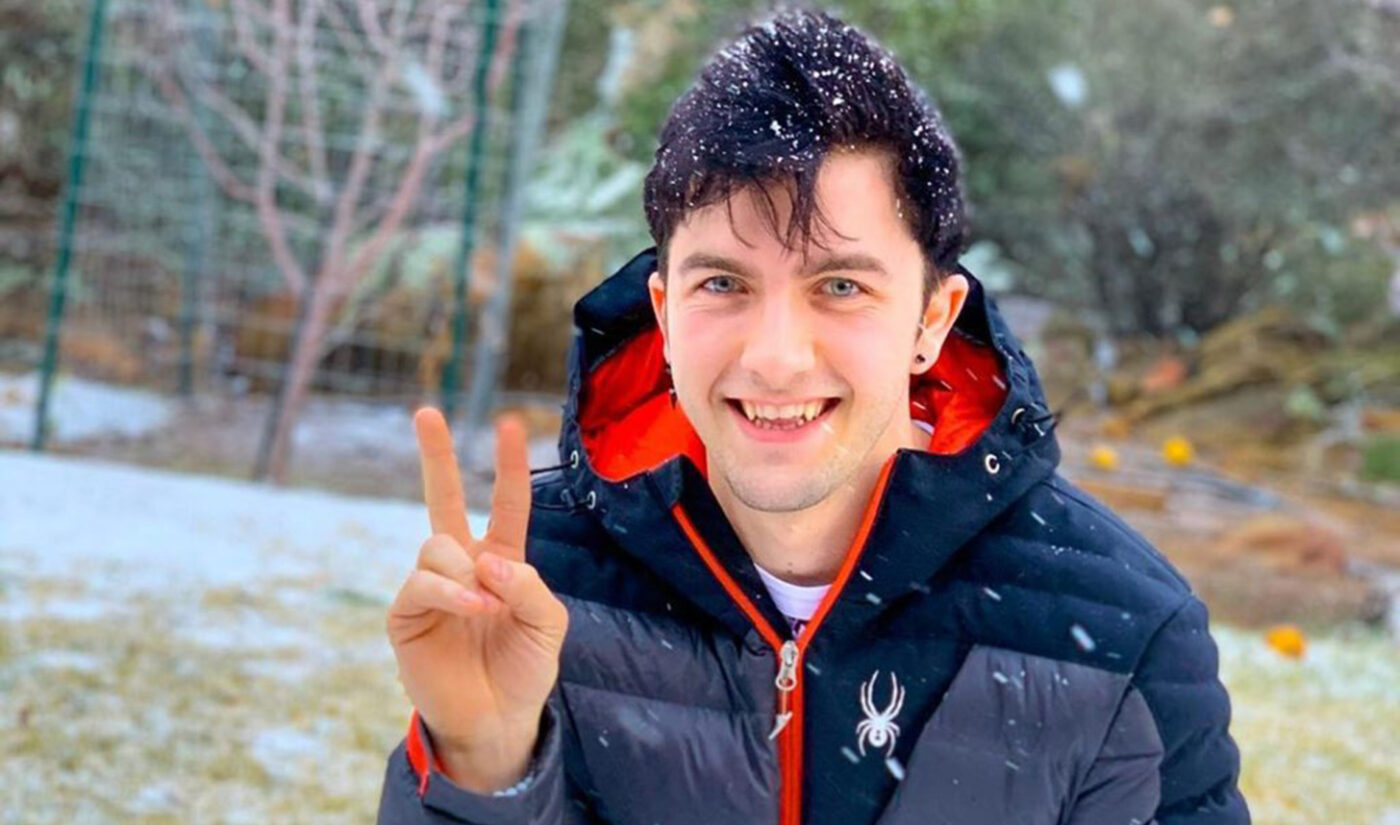 Jaden Sprinz is a vampire.

Okay, not really (as far as we know). But he does have fangs–and he’s using them to take a bite out of YouTube Shorts.

Sprinz, who’s 23, was born with unusually sharp, unusually long canines, and he’s spent his life fielding questions–and occasional insults–about his eye-catching eyeteeth. When he joined both YouTube and TikTok in 2019, things were no different. His followers wanted to know: Are his fangs real? Why does he have them? How do they affect his life?

Much of his early content answered these questions (respectively: yes, they’re real; he chose not to get rid of them; and the third answer you can see below). But the more videos he posted about his teeth, the more he noticed that among the questions were a growing number of comments from people who share this rare feature, and were happy to find a creator just like them, he says.

That interest from fellow fang-havers, plus a growing audience of folks with your standard set of chompers, made Sprinz fully commit to “vampire” as his content niche. From 2019 to around March of this year, he focused almost exclusively on making videos for his “Fang Gang” on TikTok, garnering himself 9.6 million followers in the process.

A good portion of those followers arrived at his account in early 2020, after Sprinz singlehandedly launched TikTok’s massive “hit or miss” fruit jelly craze. He accomplished that with one pack of juicy 99-cent candies. When Sprinz saw the fruit-shaped, ping-pong-ball-sized treats at his local dollar store, he thought they could make a fun video or two because they’re packaged in soft, waxy plastic his fangs can pierce.

Sprinz’s original video about the candies shows him bypassing their twist-off tops to bite directly into them, a practice that results in one of two things: a mouthful of delicious candy (hit), or a mess of jelly all over him, the floor, and everything else (miss).

@jadensprinzHit or miss!!! I love this game but I hate when it misses 😭 #hitormiss #jellycandy #jellyfruit #chickenlegbis♬ original sound – Jaden 🧛🏼‍♂️

This video went viral, inspiring hundreds of thousands of TikTokers to recreate Sprinz’s daring hit-or-miss method. Within a month, the trend had amassed nearly one billion views on TikTok and caused a widespread shortage of the jelly candies.

And, unlike many trends, jelly candies are still going strong, more than a year later. That’s why, when Sprinz decided to try his hand at YouTube Shorts in February 2021, he dove in with quick clips about fruit jellies and other kinds of capsule-popping content, plus behind-the-scenes videos about starting the hit-or-miss sensation.

For Sprinz, successfully establishing a presence on YouTube means fulfilling a goal he’s had since he was a kid. It also means amping up his cross-platform content career. Future plans, he says, now include new merch lines, a potential expansion into music, and “much, much more.”

Tubefilter: Tell us a little about you. What’s your name? Where are you from? What do you get up to outside of content creation?

Jaden Sprinz: My name is Jaden Sprinz. I am from Phoenix, Arizona. Outside of YouTube creation, I love working out, spending time with my family, dancing at music festivals, snowboarding, and doing anything else that intrigues at the time. Currently two new hobbies I have taken up are singing and boxing. So far, I’m really enjoying them both!

JS: I joined YouTube about three years ago. I joined because I have always viewed YouTube as an amazing platform to inspire people–and really, ever since I was a kid, it was always something I wished I could one day do.

I joined TikTok three years ago because after my brother told me about it, I thought it would be fun to post some silly videos and just mess around. It turned out that those silly vids went viral, and I thought it was awesome that I could post a video and it could reach so many people.

Tubefilter: What appeals to you about content creation overall?

JS: I love that you can create something unique to you, and through that you can reach so many people and create such a difference in so many lives. It’s such an amazing thing.

Tubefilter: So, you’re Member No. 1 of the Fang Gang–you were born with unusually long and sharp incisors. How did that impact your life?

JS: Being born with naturally sharp teeth has definitely been an interesting experience. It has impacted my life in a very interesting way. I never thought much of it as a kid. I had people here and there telling me that my teeth looked like vampire teeth, but I just kinda looked past it at the time.

It wasn’t until I started getting into high school that I was approached more about my teeth. My dentist actually wanted to shave them off at the time, but I declined. I can say there were some times where I wanted to get rid of them due to hurtful remarks made by others when I was younger, although now I am so happy I kept them. I view them as a part of me, and it’s beautiful thing!

I also love the messages I get from other people who have naturally sharp teeth. They tell me how they feel so cool with their teeth, and so happy that they are just like their favorite creator.

Messages like those make my day! I’m glad I have been able to create positive impacts in so many people’s lives.

Tubefilter: When did you decide to make “vampire” content? How did you discover this niche and how did the Fang Gang come about?

JS: I started creating vampire content on TikTok around three years ago. I discovered this niche because I was getting a lot of comments on my videos about my teeth. A lot of people were asking if I was a vampire, and if my teeth were real. I decided to make videos showing that they were real, and they did very well. Still, though, a lot of people didn’t believe they were real, so I just posted more videos about it.

I then thought it would be fun to make some videos where I do stuff that vampires do, and everyone loved them, so I kept with it. Then, one day, I had an idea: to call us the “Fang Gang.” People seemed to love it, so I stuck with it, and that’s how the Fang Gang was born.

Tubefilter: Your YouTube channel has recently seen a noticeable boost in subscribers and views. Do you know which video or event triggered this increase? If yes, what do you think made this video particularly viral?

JS: I believe the Shorts I posted have really boosted the increase in subscribers and views, I know the main video that really boosted my account was one with my brother, where we did very nice things for each other while we were playing games. It was more of a heartfelt video.

I think the popularity in this video was due to how nice it was and just the fact that we were both trying to help each other win the games. I also had some vampire ASMR ones that did very well–I believe those did  well because they were universally understood. They had no words, but they were very satisfying to watch, and it was a new niche that I created.

Tubefilter: You also have a very active TikTok account with a large audience. How does YouTube Shorts differ from TikTok, in your experience? Is it easier to go viral? Are there certain things about YT Shorts you like better than TikTok, or vice versa?

JS: TikTok and YouTube Shorts are both very awesome platforms! I would say YouTube Shorts has the ability to hit a wider audience, whereas TikTok–as of now–doesn’t have the reach that Shorts has.

With going viral, I would say it depends on what the video is. I think TikTok is very powerful for starting trends, but YouTube Shorts is very powerful in having a single video go extremely viral and subsequently creating more of a community through your videos.

The thing I love about Shorts is that I feel like outside of Shorts, there’s so many other ways to connect with your audience on YouTube’s platform, whereas on TikTok, your options are limited to livestreaming and videos.

Currently, I am focusing on both, and believe that they are both great platforms for their own reasons.

Tubefilter: Has your recent engagement uptick changed anything for you? Do you have any new plans or goals for your content career? Is content a full-time pursuit for you right now?

JS: Oh yes, it has changed a lot of things. I now have more of a vision on where I want to take my YouTube channel, and the Fang Gang has grown so much. I have many goals currently: I would love to release a song, maybe even do some shows, and a lot more! 100% I wake up every day and content is my life from morning to night.

JS: As a whole, I just love having the opportunity to put a smile on people’s faces. I love when I create a video and everyone loves it and it brightens their day–that also brightens my day!

JS: I have so many things planned for the future; some exciting new merchandise, some more exciting series, and much much more! So stay tuned!