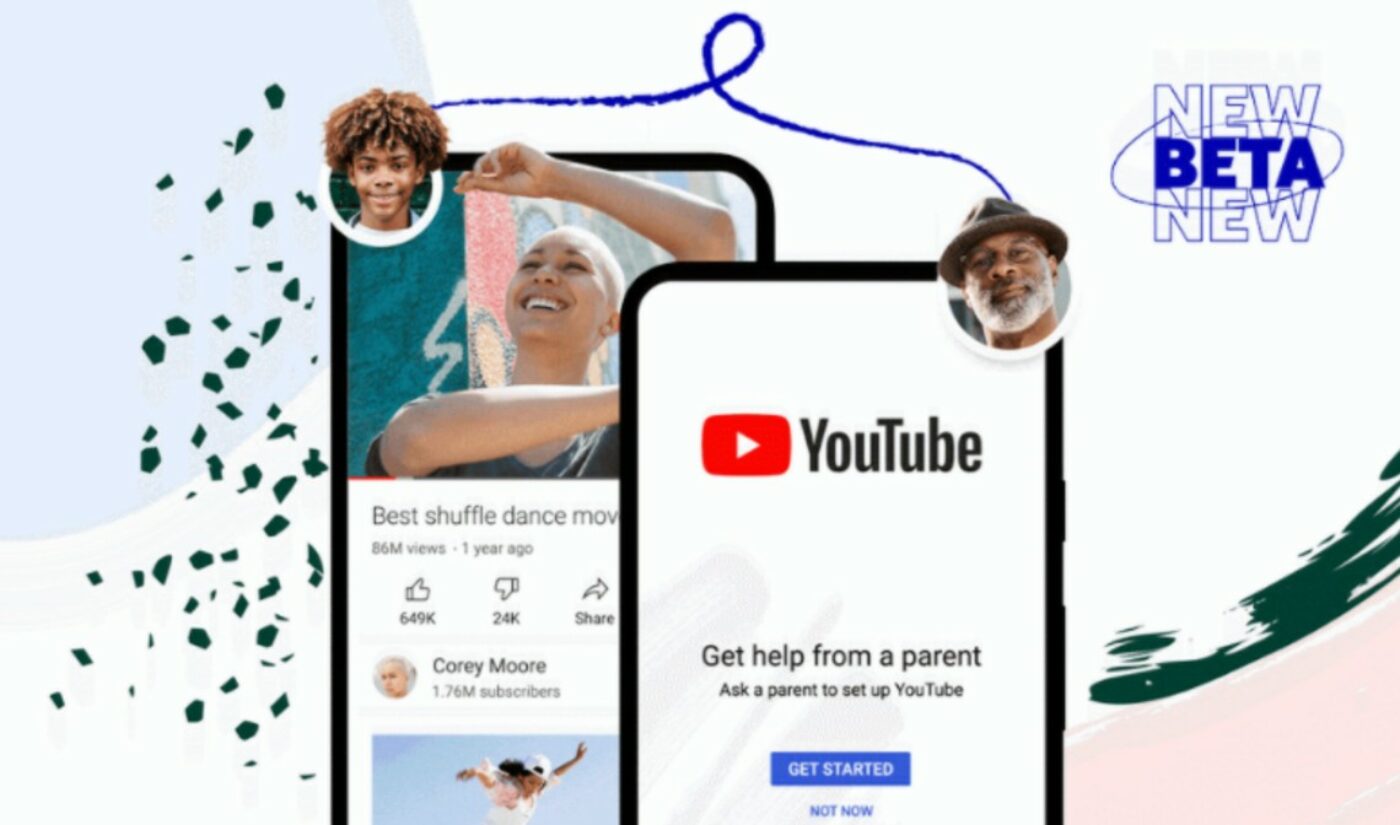 YouTube is gradually opening up access to its flagship platform — on a supervised basis — to underage tweens and teen users whose parents feel they are ready to browse beyond the dedicated YouTube Kids app, which the video giant has expressly built for users 13 and under.

The new option will allow parents to create supervised YouTube accounts for their kids, with special settings, digital well-being and privacy protections, and other controls. The product is launching via a beta test in 80 countries in coming months, YouTube says, noting that it consulted with third-party experts on development.

In order to access the feature, parents need only create a supervised Google account for their children, and then link it to their own in order to manage the YouTube experience. Any and all interested parents will be able to sign up for the beta upon its launch, a YouTube spokesperson tells Tubefilter.

The test arrives in the wake of a Sept. 2019 settlement with the Federal Trade Commission’s (FTC), in which YouTube paid $170 million for violating COPPA child privacy laws — namely collecting data users under the age of 13 to serve them ads. Following the settlement, YouTube also implemented sweeping changes to the ways it treats kid-aimed content on its flagship site, including ceasing targeted ads entirely on videos intended for children, and disabling other key features, like comments.

“We’ve built this experience with COPPA and other privacy protections in mind,” the YouTube spokesperson said of the new supervised accounts venture. “We’ve consulted various experts while developing supervised accounts and have had conversations with various regulatory bodies globally. We share the aims of policymakers around the world in wanting to protect children and better serve families.”

YouTube explained that parents will be able to choose from three overarching settings for supervised accounts: ‘Explore‘ (which will feature videos generally suited for viewers aged nine and above, including vlogs, tutorials, gaming, music, news, and more); ‘Explore More’ (an even larger set of videos suggested for kids ages 13 and above in the same video verticals), and ‘Most Of YouTube’, which will contain all videos on YouTube except for age-restricted content. This latter option is suggested for older teens, YouTube says.

“We will use a mix of user input, machine learning, and human review to determine which videos are included,” writes James Beser, YouTube’s director of product management for kids and family. “We know that our systems will make mistakes and will continue to evolve over time.”

On top of these three settings, YouTube is introducing the ability for parents to manage their children’s watch and search histories, while also harnessing preexisting tools, like screen timers, which already live in Google Family Link — an app that lets parents set digital ground rules for their children. In time, YouTube says it will add other abilities to supervised YouTube accounts, including the option to block content at both the channel and video levels.

YouTube says that the user experience for supervised viewers will feel mostly the same as the traditional YouTube experience, except that key features will be disabled, including those that were abolished in the wake of the FTC settlement. This includes all targeted ads as well as non-targeted ads in certain categories, in-app purchases, the ability to post videos, and the ability to leave comments.

Over time, however, YouTube says it will work with parents experts to integrate some of the above features with the input of experts and parents, though it declined to provide specifics.

The ads that appear on supervised accounts will be the same as those on YouTube Kids — contextual ads, which are based on the content of the video being consumed as opposed to user data. Furthermore, contextual ads will be subject to YouTube’s kids advertising policies, which bars ads about alcohol, astrology, cosmetics, and a whole host of other categories.

To educate parents about the new options, YouTube has authored a guide that will live on a new family-focused website, detailing the differences between its YouTube Kids app and the new supervised tiers. The guide was created in collaboration with Google digital safety program Be Internet Awesome, childcare app ParentZone, the National PTA, and nonprofit Net Family News.

Furthermore, in tandem with the beta launch, YouTube is readying a video campaign that will live within the new supervised experience, featuring native creators discussing pertinent issues for younger viewers, including bullying and harassment, misinformation, and digital well-being.

Even as the new supervised experience rolls out, YouTube notes that its dedicated YouTube Kids app — which is available in over 80 countries and counts over 35 million weekly viewers — will continue to add new features, programming, and parental tools. Most recently, for instance, chief product officer Neal Mohan teased a forthcoming feature whereby parents can whitelist specific videos and channels from the flagship YouTube app for their children to consume inside YouTube Kids.