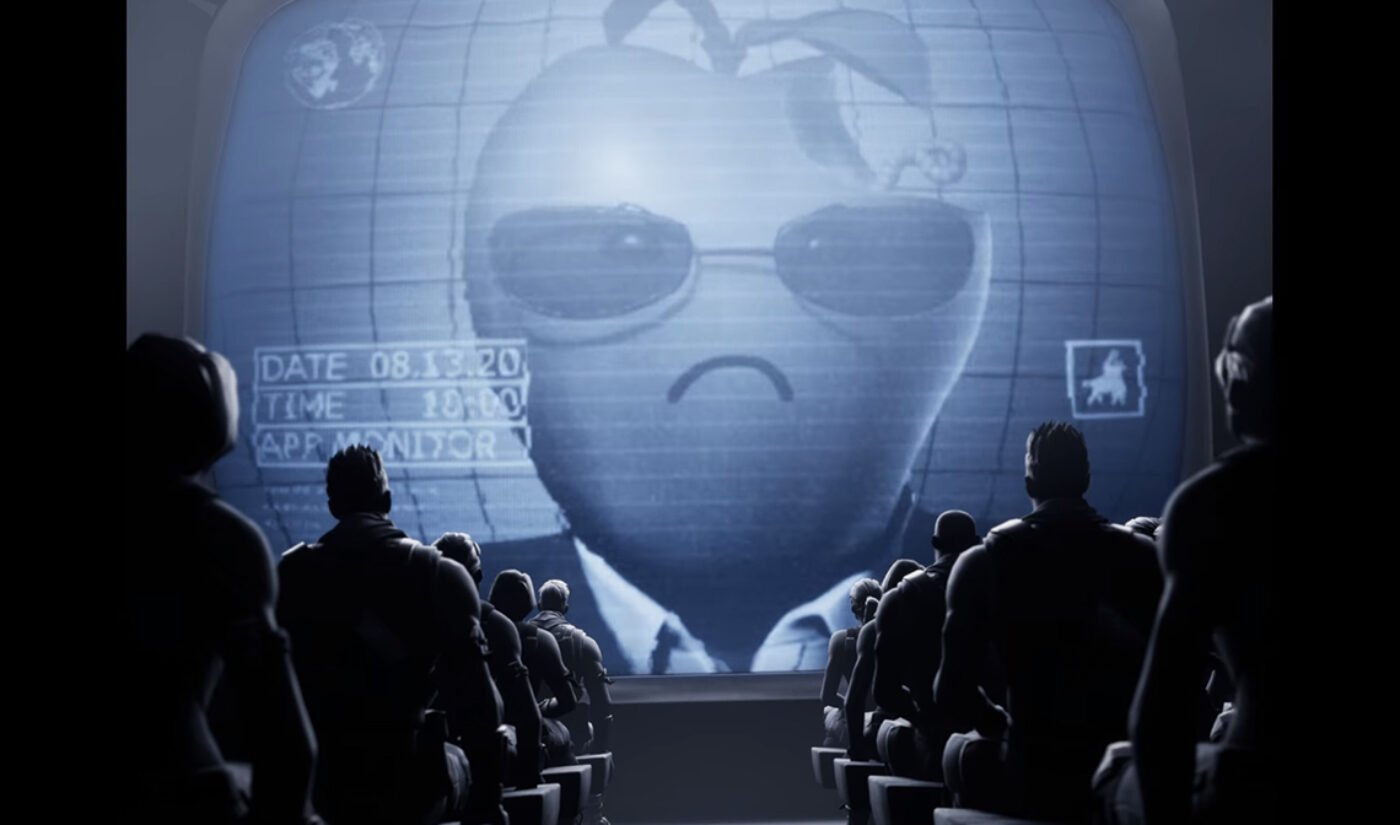 Fortnite’s official Twitch channel just spent more than 18 hours livestreaming a constant loop of one 47-second PSA. That same PSA is also being featured on the game’s YouTube channel, where it’s so far racked up 2.4 million views, and Twitter account, bringing an additional 3 million.

Cast in grainy black and white, the clip pans over rows of movie theater seats filled with some of Fortnite’s most recognizable characters. They sit mesmerized by a crackling big-screen broadcast of a dictator’s speech celebrating “the anniversary of the Platform Unification Directives.” Then, the spell is broken: poster character Brite Bomber busts in and breaks the screen with her signature Rainbow Smash melee weapon, freeing her fellows to commit a little thoughtcrime.

As Brite Bomber walks away, scrolling text tells viewers, “Epic Games has defied the App Store Monopoly. In retaliation, Apple is blocking Fortnite from a billion devices. Join the fight to stop 2020 from becoming 1984.”

But let’s back up a second, because the removals and subsequent lawsuits didn’t generate spontaneously.

Epic Games’ distaste for Apple and Google has been evident for a while. Back in June, CEO Tim Sweeney began regularly tweeting criticism of the tech giants. He pointed out that because Apple and Google don’t allow iPhone and Android users, respectively, to install smartphone apps from anywhere but their own app stores, developers are forced to make products available there rather than offering direct downloads.

And once apps are in their stores, Apple and Google take a 30% of all sales–including in-app purchases. That means any time Fortnite’s hundreds of millions of mobile users purchase its in-game currency, V-Bucks, Apple or Google gets 30% of what they paid. (V-Bucks go for around $10 per 1,000, with discounts for buying in bulk.)

Here Apple speaks of a level playing field. To me, this means: All iOS developers are free to process payments directly, all users are free to install software from any source. In this endeavor, Epic won’t seek nor accept a special deal just for ourselves.https://t.co/A4sT1eMKMm

This is a critical consideration in these 30% store fees. They come off the top, before funding any developer costs. As a result, Apple and Google make more profit from most developers’ games than the developers themselves. That is terribly unfair and exploitative. https://t.co/SSCTS4Iq2n

Apple’s intentional anti-competitive strategy has been running for much longer than most realize. Here they are in 2011 muscling Kindle purchases off of iPhone by demanding 30% of e-book revenue, “which we acknowledge is prohibitive for many things”.https://t.co/trnugoOZgV

So, yesterday, Epic Games cut Apple and Google out of the equation by adding a direct payment portal to its iOS and Android apps. The portals sell V-Bucks at a permanent 20% discount, undercutting the app stores’ prices while still bringing Epic Games 10% more revenue than it would’ve gotten if users purchased through Apple or Google.

Ducking the 30% fee is against both App Store and Play Store policies, which is why Fortnite was promptly removed. iOS and Android users who already installed the game on their devices will still have it, but they will no longer receive any updates. (That’s a big deal, because Fortnite updates very frequently to add new cosmetic items, map updates, game modes, events, and seasons.)

Epic Games had lawsuits ready to go. It’s asking courts to order Apple and Google to stop “anti-competitive and unfair conduct” and mandate that the companies “take all necessary steps to cease such conduct and to restore competition.”

In a statement rolled out with its #FreeFortnite PSA, Epic Games told users, “Epic believes that you have a right to save money thanks to using more efficient, new purchase options. Apple’s rules add a 30% tax on all of your purchases, and they punish game developers like us who offer direct payment options.” (The statement was released before Epic also sued Google.)

The developer urges players to protest Apple and Google’s actions by using the hashtag #FreeFortnite on social media.

Apple told CNN that it will work with Epic to restore Fortnite to the App Store, but added, “Epic Games took the unfortunate step of violating the App Store guidelines that are applied equally to every developer and designed to keep the store safe for our users.”

Google also said it will work with Epic to restore Fortnite. “For game developers who choose to use the Play Store, we have consistent policies that are fair to developers and keep the store safe for users,” it said in a statement.

Last month, Apple and Google joined Amazon and Facebook in answering questions from U.S. lawmakers over allegations of anti-competitive behavior.