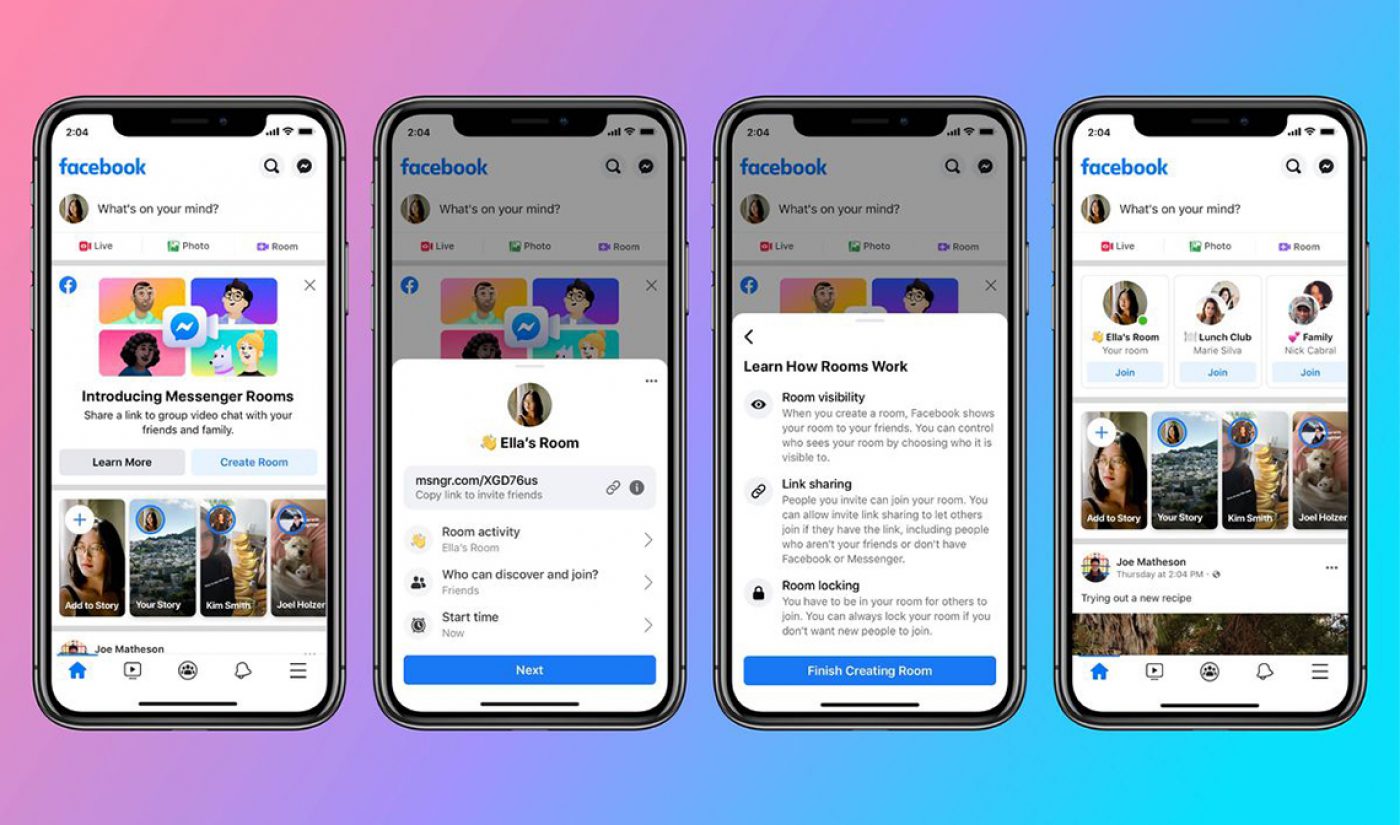 The social network today announced that because of increased traffic caused by the COVID-19 pandemic, it’s adding (and bringing back) live video features to its various products.

“Lately, Facebook has felt the demand for real-time video,” the company wrote in its announcement. “Between WhatsApp and Messenger, more than 700 million accounts participate in calls every day.” It added that, since March, “video calling on Messenger and WhatsApp more than doubled, and views of Facebook Live and Instagram Live videos increased significantly.”

Meanwhile, Zoom, which is often used by companies and has been adopted by some universities and school districts to hold remote classes, has gone from 10 million daily users in December to more than 300 million currently.

Facebook appears to want a slice of that growth, as chief among its new features is Messenger Rooms, a free videoconferencing service that lets up to 50 people join one call. It’s an add-on feature to Facebook’s website, main app, and Messenger app (rather than being split into a standalone like Messenger itself was). While a Facebook account is needed to launch a Room, invited participants don’t need to sign up for an account or download any apps to join in on a call from their phone or computer, Facebook said.

In a live stream about these new features, Facebook CEO Mark Zuckerberg appeared to position Messenger Rooms as a more secure alternative to Zoom, which in the past couple of weeks has faced backlash over “Zoombombing,” a practice where people enter others’ calls without permission.

“We also know it’s really important that annoying people, or problematic people” are kept from calls, he said, per Variety. “We’ve built this with security and privacy in mind from the beginning.”

For now, Messenger Rooms can be created and shared on Facebook users’ News Feeds, in Groups, and as Events. In the future, Instagram, WhatsApp, and Portal users will all be able to launch Rooms from those apps, too.

According to Facebook, Messenger Rooms “is rolling out in some countries this week and will expand to the rest of the world in coming weeks.” It did not specify which countries will have access this week.

Facebook also announced it’s re-adding Live With, a function it nixed back in November. The feature lets creators invite others to join in on their live streams, and, crucially, can be used to bring in guest speakers or expert interviewees.

Additionally, creators can now add a donate button to live videos and raise money for nonprofits, Facebook said. It also noted that it’s expanding its creator-supporting onsite currency, Stars, to more makers in more countries, although it didn’t offer specifics.

More tweaks: Facebook added an option to mark Events as online-only and plans to integrate Facebook Live to offer event live streams; it added an ‘audio only’ option for users watching live video, so they can choose to listen to a broadcast instead if a spotty internet connection makes the video unwatchable; and it’s expanded Messenger Kids to more than 70 countries.

Facebook has also made a couple significant changes on subsidiary platform Instagram: Users can now comment on live Instagram broadcasts from their computers, instead of having to use their phones, and creators can now save their Instagram Live broadcasts to IGTV so they’re preserved beyond the usual 24 hours.