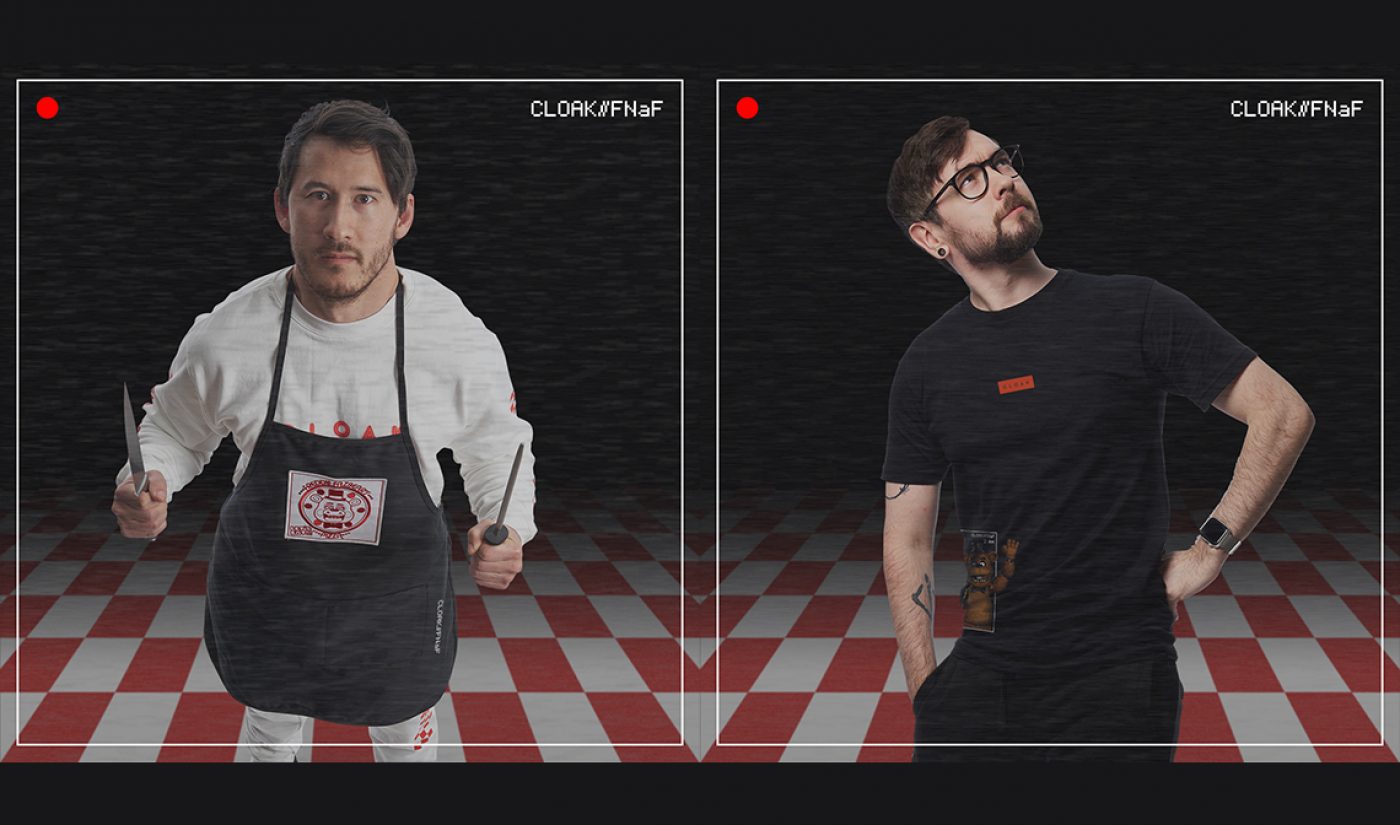 Thanks to Cloak, Five Nights at Freddy’s fans can now deck themselves out just like a Freddy Fazbear’s Pizza employee–and they (probably) don’t even have to risk life and limb in the process.

The clothing brand, launched in 2018 by YouTubers Markiplier (25.4 million subscribers) and jacksepticeye (23.6 million), partnered with FNAF creator Scott Cawthon to release a 15-item collection of official wearables. Products include hoodies ($60), sweatpants ($50), an apron ($28), a beanie ($18), T-shirts ($30), a FNAF edition of Cloak’s signature cloak ($88), and an IRL version of the jacket given to all members of Freddy Fazbear’s ill-fated security team ($74).

Cloak dropped the collection this morning, and a number of items sold out within minutes. It restocked as quickly as possible, but as of press time, the cloak, security jacket, and beanie are all once more sold out.

For those unfamiliar, FNAF is a cult favorite point-and-click horror franchise. Its flagship title, Five Nights at Freddy’s, puts players in the shoes of Freddy Fazbear’s new nighttime security guard. The job–make sure no one breaks in–seems simple, but as the night wears on, players realize the game isn’t so much about who might break in, but what might break out. FNAF was first released in 2014, and swiftly rose to popularity on YouTube. Both Markiplier and jacksepticeye are notable early FNAF enthusiasts whose playthroughs have racked up millions of views.

Over the years, Cawthon (via his one-man development studio, Scott Games) has released a variety of licensed products with brands like Hot Topic, but Cloak appears to be the first YouTuber-owned clothing brand with which he’s partnered.

As is usual with Cloak’s product drops, it’s donating a portion of sales from the FNAF collection’s sales. 10% of proceeds will go to the World Health Organization’s COVID-19 Solidarity Response Fund—a cause both Markiplier and jacksepticeye raised funds for earlier this week with marathon live streams.

In a statement posted to its site, Cloak also notes that it’s taking “extraordinary precautions” to make sure the folks making and shipping its products are safe, and says it currently doesn’t expect any delivery delays.

“We are taking this extremely seriously, so we don’t put anyone in our Cloak family at risk,” the brand wrote. “We thank you guys from the bottom of our hearts for your understanding during this challenging time, we couldn’t do it without you.”