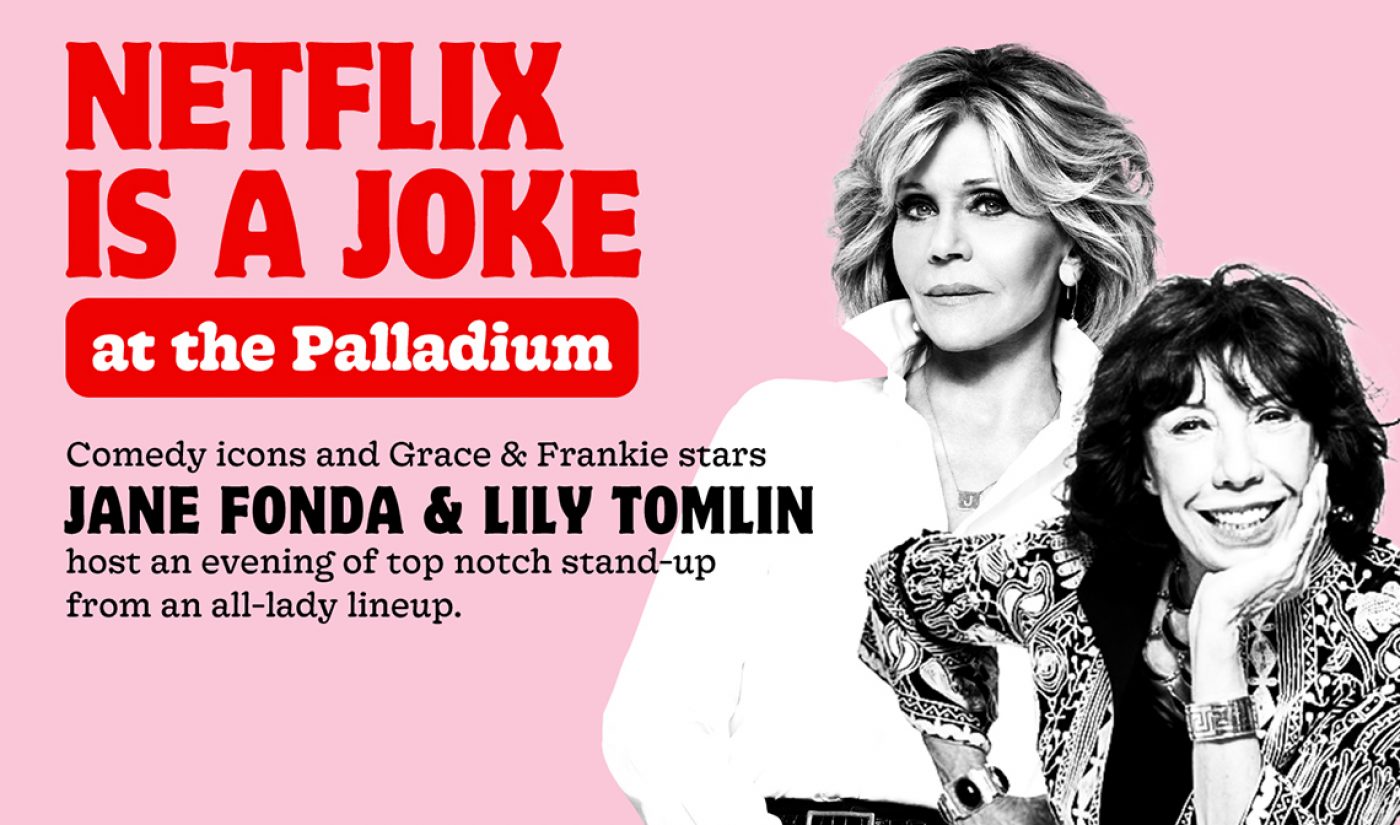 Called Netflix Is a Joke, the fest will feature major comedians including Wanda Sykes, Whoopi Goldberg, Margaret Cho, Jane Fonda, Lily Tomlin, David Letterman, Ali Wong, Dave Chappelle, Sarah Silverman, Kevin Hart, and the cast of Schitt’s Creek. They and dozens of other comedians will perform at a weeklong set of live events hosted by Los Angeles venues like Largo, the Hollywood Bowl, the Wiltern, the Palladium, the Laugh Factory, and Dynasty Typewriter.

The fest runs from April 27 to May 3; tickets go on presale March 3 and on sale March 6. There aren’t any ticket prices listed for presale or sale periods yet, and it appears that there is no overall festival pass. Instead, attendees will need to separately purchase tickets for each show they plan to see.

And for those unable to make it to the live events, no worries: Some of the performances will be recorded and made available for viewing on Netflix, Vulture reports. (In the list below, they’re marked with “recorded.”)

Every single incredible comedian you can see LIVE in LA at Netflix Is A Joke Fest 4/27-5/3: A Thread pic.twitter.com/MTK55LH8wl

This move is Netflix’s latest lean into the comedy space. The streamer debuted its first comedy special in 2013, and poured millions of dollars into producing more, paying headliners like Chris Rock and Jerry Seinfeld as much as $20 million for a single one-hour special, before slowing down last year to refine strategy. All of its top-watched comedy specials for 2019 featured established celebrity comedians (Chappelle, Hart, Sykes, Schumer, Ken Jeong, and Gabriel Iglesias, to name a few), and it invested in iconic comedian Eddie Murphy‘s dramedy film Dolemite Is My Name, but the company indicated its plan moving forward is to bring in lesser-known jokesters to focus on short sets and sketch comedy.

“This festival is a unique celebration of the art of comedy, and the role it plays in reflecting our lives and defining culture,” Ted Sarandos, Netflix’s chief content officer, said in a statement. “It’s a chance for comedy lovers to come together and see their favorite artists as well as discover new ones, and for us to be able to share the electricity and excitement of the festival in Los Angeles with Netflix members around the world.”

You can check out the fest’s full lineup, as provided by Netflix, below.

THE THEATRE AT ACE HOTEL

• That’s My Time with David Letterman: Legendary late night host David Letterman returns to his roots to showcase some of today’s finest stand up comedians to perform and then join him for a one-of-a-kind interview. (recorded)

• Netflix Is a Joke at The Palladium Hosted by Jamie Foxx: Megastar and Oscar-winner Jamie Foxx hosts this loaded lineup featuring some of his favorite comedians! (recorded)

• Netflix Is a Joke at The Palladium Hosted by Amy Schumer: Movie star and powerhouse standup Amy Schumer hosts this epic night filled with some of Netflix’s hottest comedians! (recorded)

• Netflix Is a Joke at The Palladium Hosted by Martin Lawrence: From Def Comedy Jam 25, superstar comedian Martin Lawrence returns to Netflix to host an evening of heavy hitting stand-up. (recorded)

• Netflix Is A Joke at The Palladium Hosted by Jane Fonda & Lily Tomlin: Comedy icons and Grace & Frankie stars Jane Fonda and Lily Tomlin host an evening of top notch stand-up from an all-lady lineup. (recorded)

• Jacqueline Novak Get On Your Knees live

• The Arsenio Hall Comedy Showcase: Arsenio Hall presents a lineup of the funniest comedians in LA at the legendary Comedy Union.