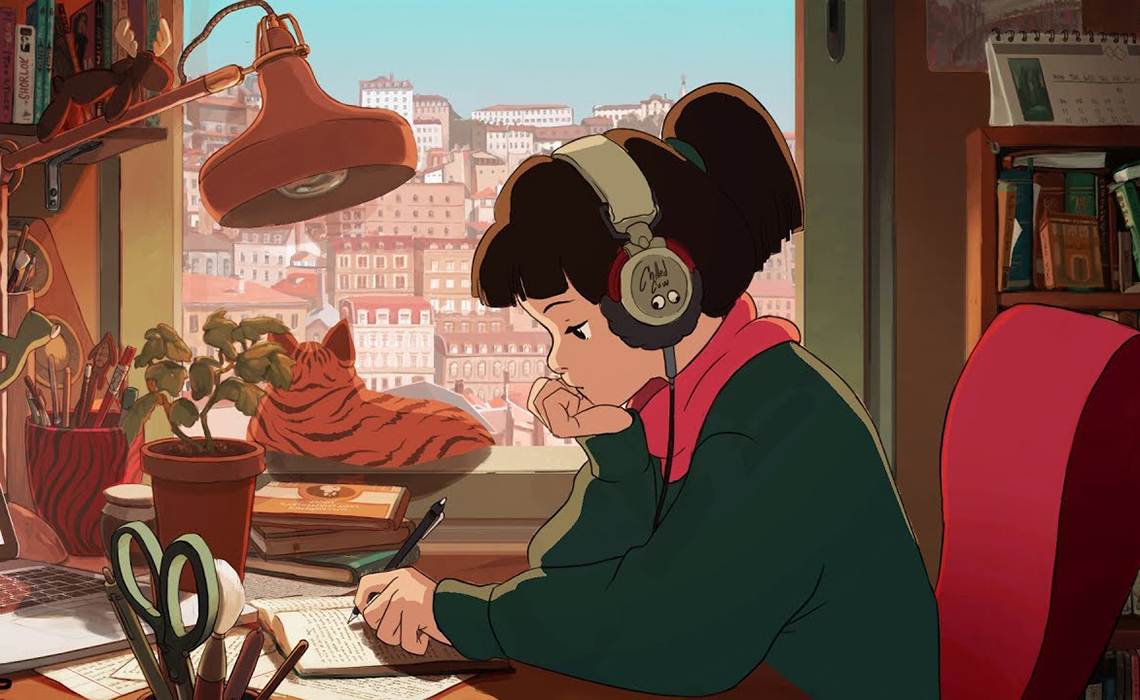 When YouTube terminated the channel ChilledCow Feb. 22, it had been streaming music 24/7 for 548 days.

The channel’s owner, who just goes by Dimitri, works with music and visual artists to put out two videos per week, each featuring unique tracks and art. But ChilledCow’s best-known video isn’t one of the weekly uploads. Instead, it’s a ceaseless stream of “lofi hip hop” intended for listeners who want to relax or study. Like the rest of ChilledCow’s vids, the stream contains music used with permission from the artists and features unique art: an animated girl seated at a desk writing notes while a cat watches out the window behind her. The view outside the window is changed, often in time with seasons.

After its launch in 2018, ChilledCow became emblematic part of a blossoming sector of digital pirate stations, and was renowned enough for Dimitri to be profiled by The New York Times. Its dedication to relaxed background beats and calm artwork also–as its name suggests–makes it part of chill, a rising video/music genre that commonly combines easy-on-the-ears music with easy-on-the-eyes imagery for studying, spreadsheet-making, and other boring tasks. As of January 2020, ChilledCow’s lofi studying stream and regular uploads had been netting ChilledCow at least 20 million views per month for 13 months straight. (Also, it has an impressive 4.42 million subscribers.)

But then, on Saturday, Dimitri received a notification that YouTube was shutting the channel down after determining it was “not in compliance with our Terms of Service.”

Dimitri tweeted at YouTube, asking what was up. And they weren’t alone. Dozens of fans had already begun realizing the stream was offline, and were taking to Twitter too, lamenting its loss.

Wherever you are now, we sincerely hope you finally managed to finish your homework. Thanks for all the good times. pic.twitter.com/DTXtlZRSi3

where were you when the chilledcow account went down? i for one was studying at home listening to lofi beats and chilling pic.twitter.com/MLyJ1hKHt0

“Thanks for flagging this to us!” Team YouTube tweeted back to ChilledCow. “Our teams confirmed that this was a mistake on our side and your channel has now been reinstated.” (The team didn’t provide any information about what caused ChilledCow to be taken down, but we’re guessing it had something to do with copyright concerns.)

Dimitri responded with thanks to those who’d spoken out:

My account has been unbanned, thank you from the bottom of my heart for the tremendous support, I’m grateful to have such an amazing community🧡I will launch the stream again as soon as possible pic.twitter.com/hcAKB5wXWb

One interesting consequence of ChilledCow’s termination is the creation of an enormously long YouTube video. As we mentioned above, prior to termination, ChilledCow had been streaming nonstop for one and a half years. Though the channel is back and the lofi studying stream is online again, it isn’t the same stream. ChilledCow’s temporary termination took the livestream offline and preserved it as a regular upload–one that’s 13,165 hours long.

Happy to see @ChilledCow‘s lofi hip hop radio stream got reinstated, but I think by taking the account down – however briefly – YouTube may have inadvertently created the longest video on the platform.
That is a 13,165 hour, 23 minute, 44 second long stream VOD 😂 pic.twitter.com/LsMBoQodPV

Because of ChilledCow’s content and how rigorous YouTube’s copyright systems are, it’s likely the channel will run into future problems despite Dimitri having artists’ permission to stream. But, for now, the chill is back on beat.